Trot Insider has learned that a handful of reinsmen joined forces to raise more than $4,400 from their mounts and donations this past weekend for fellow injured driver Stuart Sowerby. 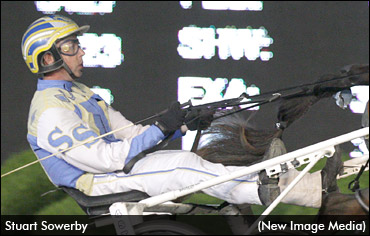 Drivers Doug McNair and Scott Zeron were joined by James MacDonald and Billy Davis Jr. in donating 100 per cent of their purse earnings from their Saturday, June 16 drives at Flamboro Downs. Bob McClure and Scott Young also lended a helping hand by donating their earnings from Saturday's card at Hanover Raceway.

The Sowerby fundraiser continued Sunday at Flamboro and included JR Plante, Scott Coulter, Anthony Haughan and Anthony MacDonald, who won six races. Other individuals were also just walking up and handing in cheques.

Sowerby suffered a broken collar bone during a training accident last Saturday, June 9 and is expected to be out of action for six to eight weeks.

This is what it is all about,

This is what it is all about, standing united, coming together and helping our people. What a treat to hear of such an out pouring of good will. Wonderful to hear, especially in light of today's news. A speedy recovery to our friend Stuart, and all the very best to these lads for offering such a kind gesture, well done.