Another Push For Hamilton Referendum

It is an ongoing debate that has been a hot topic since last spring, and the divisive issue of downtown Hamilton casino expansion has not cooled one bit since an Ontario Liberal Leadership candidate threw her hat into the ring late last week.

Kathleen Wynne went on the record as saying that she would “absolutely” back the City of Hamilton if City Council came to the decision that it would rather have the Ontario Lottery and Gaming Corp. locate a proposed casino expansion at the rural Flamboro Downs instead of in the heart of the city's downtown core.

Wynne was quoted as saying, “Hamilton made that decision,” adding, “That’s what I’m saying. The OLG would have to live with that.”

Wynne stopped short of declaring that she would halt the OLG's controversial gaming modernization plan, but did state that, if elected chief of the Ontario Liberals, that she would consider pressing the pause button on the process in order to review the plan. 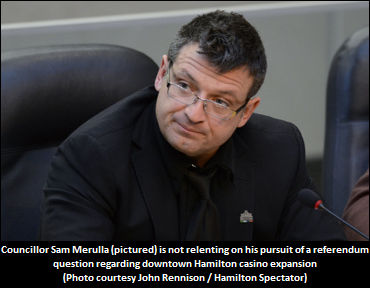 On the heels of Wynne's statement and a pair of passionate community consultation meetings on the subject, well-known anti-downtown casino Councillor Sam Merulla has stated that he plans on reintroducing his call for a Hamilton referendum on the downtown casino issue.

News of Merulla's renewed call comes courtesy of a report by the CBC, which also states that the councillor wants the new Ontario Liberal Leader to pause the OLG modernization process in order for a Hamilton referendum to take place. The CBC has quoted Merulla as saying, “I believe that this approach is the most consistent, predictable and non-chaotic.”

The Hamilton Spectator reported last week that a downtown casino complex proposal by the Mercanti Family, which is well-known in the Hamilton area, will also feature a pitch by U.S. casino operator Hard Rock International. The article states that the pitch will be heard by Hamilton city councillors on Wednesday, February 6.

The Hamilton Spectator story has quoted P.J. Mercanti as saying that “the majority of Hamiltonians will also be delighted” with the entertainment-complex proposal. “I would not be supportive of a stand-alone gaming facility,” Mercanti was also quoted as saying. “The conversation will change from casino to entertainment destination. And that’s an important message that we plan to communicate. This is about creating an entertainment zone.”

Not all downtown Hamilton business owners seem to be as over-the-moon with the prospects of a downtown 'entertainment complex.'

"People go to the casino, they eat in the casino, they stay in the casino and then they leave the casino, so I really can't see that it's going to be very important to the growth of the downtown area," said Beverly Zaruck, owner of I Fiori Flowers in downtown Hamilton, in an interview with CHCH. "It'll be great for the (casino) investors, it'll be great for the people that come down and visit it (the casino), but as far as urban renewal is concerned, and as far as the quality of life is concerned, I don't think it's going to add to it."

(With files from CBC, CHCH and the Hamilton Spectator)