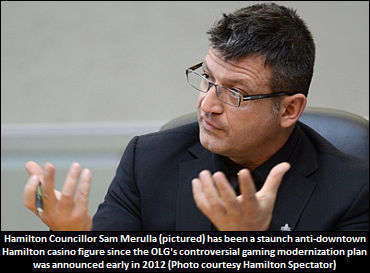 The City of Hamilton is gauging public sentiment regarding the expansion before it makes its final decision in regard to whether or not it wants to declare itself a willing host municipality to a full-blown downtown casino.

The second of the consultation sessions is scheduled to take place today (Thursday, January 17) at Hamilton City Hall (71 Main St. W.). The session is scheduled to begin at 6:30 p.m. and it has been reported that Cable 14 will be televising the proceedings.

Hamilton City Council has consistently voiced its support for the current gaming facility at Flamboro Downs to remain instead of introducing a downtown casino. In terms of a downtown location if the casino were to be introduced to the urban setting, the city planning department has identified the waterfront, King Street East, York Boulevard and Jackson Square as conceivable locations as long as the property is associated with a hotel complex or other city-building projects. According to reports, the OLG has set a March 1 deadline for the city to determine whether or not it wants to be a willing host for a casino.

It is expected that those against the idea of a downtown casino will be showing up to the consultation sessions in large numbers. A report by the CBC has quoted Matthew Green, an activist against the downtown casino, as saying, “We want to galvanize people and we want to ask hard questions.”

The CBC article also states that both meetings will be streamed live on the City of Hamilton's website.

The rally AGAINST the

The rally AGAINST the proposed downtown casino begins today at Waterdown High School at 5:30pm...