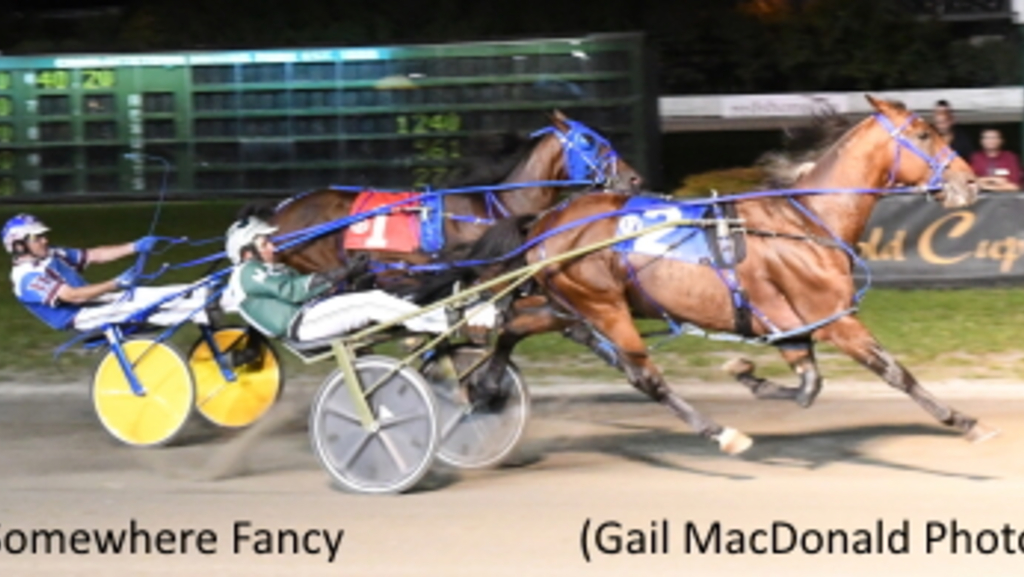 It’s one thing to win the Gold Cup & Saucer once, but pacer Somewhere Fancy has put himself into the hunt for a second title in PEI’s prized pacing event thanks to his gate-to-wire triumph in Monday’s $12,500 Trial #3.

Somewhere Fancy, who captured the 2018 edition of the Gold Cup & Saucer at the Charlottetown Driving Park before coming back to finish second the following year, powered to the lead Monday evening for driver Marc Campbell and successfully whacked out fractions of :27.4, :56.1 and 1:24 before using a :26.4 kicker to win in 1:50.4. Next best was Smooth Lou, with Legion Seelster taking home third prize.

Chris McKay trains the 10-year-old son of Somebeachsomewhere-Fanciful Hanover for John Mehlenbacher of Oakville, ON. The 57-time winner has banked over $840,000 to date.

The official post-position draw will be held after Race 4 on the Tuesday evening program at Red Shores Charlottetown.

Dustylanegoliath won his $16,200 Atlantic Sires Stakes A-division for three-year-old pacing colts on the card in 1:53.3 for trainer-driver Gilles Barrieau and owner Daniel Ross of Belfast for the Steelhead Hanover colt’s third straight win.

The other $16,200 A-division for sophomore colts saw Woodmere Stealdeal (Campbell) victorious in 1:53.1 for trainer Danny Romo and owners Kevin Dorey and Robert Sumarah of Nova Scotia along with new Ontario partners Glenn MacDonald and Frank Bundle.

Campbell had four driving wins on the card as he also won with Hunger Pangs (1:54.2) for trainer Blaine McKenna and I Can Do It (1:58.1) from the Keith Ford barn.

Romo had two training winners on the night including a 1:57.1 score with Woodmere Tesla in a $3,000 B-division for three-year-old colt pacers in line to Barrieau.

(With files from CDP)

My boy looking good but so did some others... post draw tonight need some luck. Good luck to all involved.