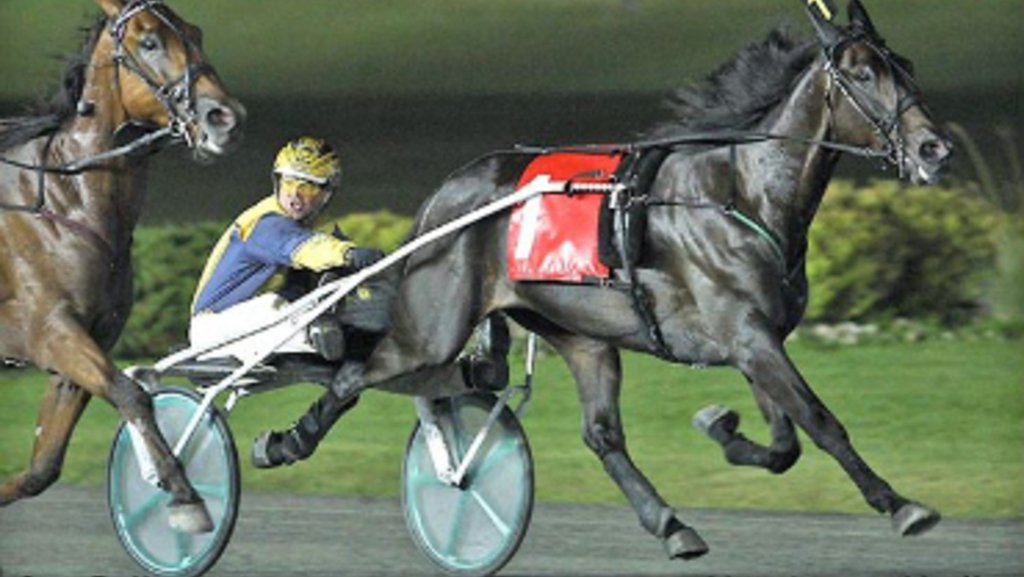 It was San Pail's 19th career win for trainer Rodney Hughes, who owns a piece of the horse with the Ontario-bred's breeder Glenn Van Camp.

"I couldn't be any happier," Waples said. "I'm an emotional guy. This is sweet; really sweet."

San Pail did it on the basis of a brilliant Waples drive, who admitted he might have over-raced him in the elimination, a race he was beaten 1 1/4 lengths by Lucky Jim last Saturday night.

"I was so down on myself last week when I over-raced him," Waples said. "It worked out, and I can't say enough about Rod Hughes, the job that he's done with him. He's such a nice horse."

Waples and San Pail sat just off an early quarter-mile split of :27.3, set by Sakic Seelster. That one began to fade and San Pail established command soon after, cutting internal splits of :55.4 and 1:24.1. On the turn, Arch Madness loomed a threat and the two duelled to the wire, but San Pail gutted out the win.

It was Waples' first win in the Maple Leaf Trot, a race he envisioned winning as boy, an event his Hall of Fame father, Ron, won five times.

"When I was a little kid I used to walk into Greenwood and see the big plaques on the wall, all the winners of the Canadian Pacing Derby and the Maple Leaf Trot, they were the two races to win when I was young. Now my name's on both of them."

San Pail had a huge cheering section, chanting and screaming for him just metres from the finish line on the Mohawk apron. Much of the throng joined the horse, Hughes and Waples in the winner's circle.

"They're all family and friends," Hughes said, of the obvious crowd. "They're from two hours east of here to two hours west, and they're all here to support the horse."

For recaps of the Canadian Breeders' Championship finals, click here.

We all knew it would happen sooner or later. Your care for horses is second to none. You have come a long way since you worked for me. Jerry you have come even further since you drove Sly Frost lol. I remember racing against San Pail at Rideau Carleton in a Grassroots and he made a break. You never gave up or lost faith. I wish Susie's whole family could have been there. I am sure they are looking down with a massive smile! Hallsy, you were always there through thick and thin.

Way to go rod and co. Was in

Way to go rod and co. Was in the states for this one. Even I could have got excited. Quite a story bud. Good for you. You've come a long way from trying to keep warm in utica! Price of firewood goes up lol.

Congrats to Rod and Jerry

Congrats to Rod and Jerry for a job well done. Score one for the little guys. Congrats as well to co-owner Glenn Van Camp, a great guy deserving of a great horse. Last but not least congrats to Randy Waples another big victory to add to those already impressive credentials. WTG Baby Bubble -lol.

never been so happy for my

never been so happy for my cousin rodney and my uncle jerry aunt suzy sanpail raced like a champion last nite what heart loved how he dug in to wasn't going to be denied it was his night congrats to rodney,jerry,suzy so well deserved to go sanpail go lol

CONGRATS ROD AND JERRY. WATCHED THE RACE AND CAN ONLY SAY WOW. YOU DESERVE THIS FOR ALL THE HARD WORK YOU DO. GREAT DRIVE RANDY AS ALWAYS. CONRATS TO ALL THE SAN PAIL CONNECTIONS. ED...

To RODNEY the owners, and

To RODNEY the owners, and the Hughes family. We are so happy that you won the MAPLE LEAF TROT. Your patience has paid off well and using one of the best drivers RANDY WAPLES helped also. Randy we are so proud of you to have won this race also.SAN PAIL IS ONE HELL OF A HORSE. I know how special this race is to you all as i paddocked the winner twice for Rodger White, the horse was SPRITE KID.Its a dream come true for you all and wittnessed by the world.

Great Job Rodney, It is

Great Job Rodney, It is noce to see the little guy get a chunk of the prize. Takes me back to the day's we helped out Mike and he was on the roll with Billyjojimbob. Way to go Bud