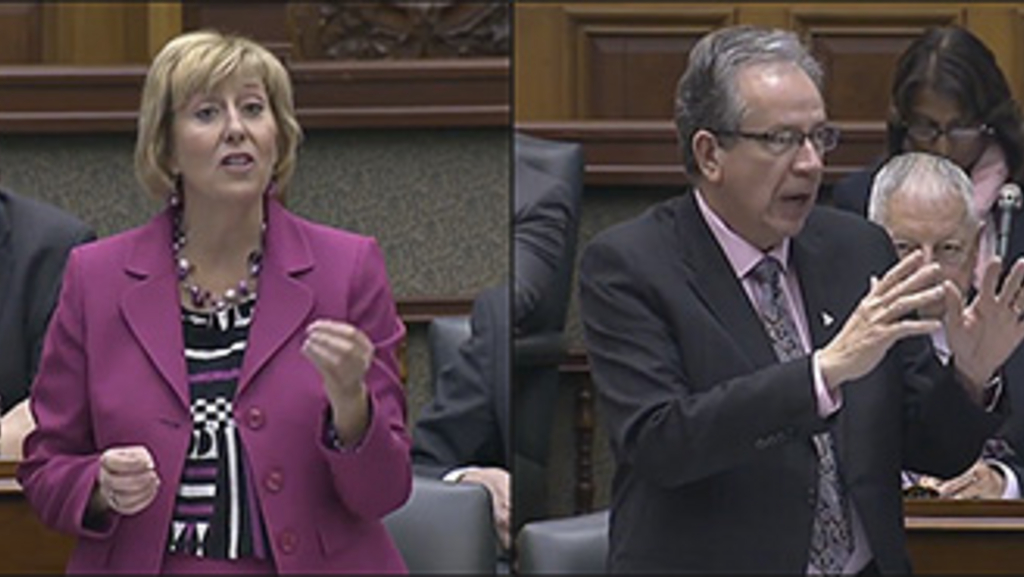 Today during Question Period, Ontario MPP Laurie Scott asked the Minister of Agriculture, Food and Rural Affairs, Jeff Leal why, in her opinion, the Liberal government "is no longer committed to the sustainability of the horse racing industry at Kawartha Downs."

Estimates indicate the Township of Cavan Monaghan will lose $3 million in annual slot revenues, which Scott notes is used to fix roads and bridges. “This will only continue to strain the small budgets of municipalities like Cavan Monaghan,” said Scott. “The government loves to talk about infrastructure, yet now that my township is faced with losing significant slot revenues, the government won’t bat an eye.”

“The loss of slots will ultimately close Kawartha Downs and the horse racing will be gone,” predicted Scott, who stated this decision will have "a devastating impact not only for the municipality but for people who work directly and indirectly in the industry."

The statement also noted that "in 2013, the Minister said that there was a plan to maintain a share of slot revenues to support the horse racing industry, but yesterday’s announcement shows otherwise."

Anyone who went to see and

Anyone who went to see and listen to Mr. Leal last year was naive and should have turned their back to him. After what was already done by the Liberals why would anyone believe anything any of them say??

Well said Mr Blackburn.
The industry just can't seem to grasp that slot money is the governments and no one else's. If you put on a show people will come. There was no promotion of the sport by the sport itself all the years slot money was going to the horsemen and there still isn't any promotion of the racing product just blame. Fix your issues and promote the industry to a new group of people and you may survive. As for the Township of Cavan.....all the years you took your share how much did you give back to racing?

In reply to Well said Mr Blackburn. This by jkchill

Slots help the community they

Slots help the community they are situated in, Mr Hill. If horse racing exists or not, slots will succeed. If it moves to another area in town, the town will still get its cut.

You might want to worry about fans coming to the track, rather than worrying about what the government does. It seems you content on racing for empty stands as long as the slots gives you some money.

It's time to get past the slot thing.

Well said Mr Blackburn. This action shows OLG's and the liberals true colours. As I have said many times before, a dollar wagered on racing is a dollar not spent on slots. The only thing they are trying to save is face

The owner of KD has not sunk

The owner of KD has not sunk much back into his facility which is not what SARP was intended to be. What difference does it make other then to him and his pocketbook that there are no longer slots at KD? Horsemen do not get a cut of slots, has everyone here forgot that? The people throwing their money into slot machines do not give a damn about harness racing, they do not wager on this product, so who needs them. See ya!! They should take the slot parlours out of every racetrack in Ontario.

The Township of Cavan Monaghan does not sink one cent back into this industry and I advise them to hold more bake sales now that the gravy train has ended for them. Cry me a river!!

Jeff Leal is not someone worth wasting your breath on, he's a two faced politician who does what his party tells him to do. He is a yes-man, nothing more.

Mr Leal's job, as Minister of

Mr Leal's job, as Minister of Agriculture, is to support agriculture, which means horse racing and breeding as well as the hay and grain industry horses support. When running for election, Mr Leal attended the races at Kawartha Downs several times & visited the backstretch to get support of the horsemen. Now, Mr Leal is in office, and he changed his allegiance (Shoreline Casino Company has more money behind them)-- just like the last two Agriculture Ministers.

Here we go again, in my

Here we go again, in my opinion if you move this casino from Kawartha Downs it will be the end of the horse racing there. Please explain the benefit of moving this casino maybe 20 miles down the road to the town of Peterborough. Money talks and this is why they want it. Has the owner of the race track raised his lease up so much that it no longer makes sense to keep it at the track? Another thing is why was it sold and OLG not handling it? I thought this was the idea to bring horse racing under the OLG. Please someone answer for me. And another things that burns me is Jeff Leal, you didn't show your face till it was to your benefit. When it's picture time in the winner's circle... well don't step in any of the stuff your shoveling out. Liberals will be defeated next time you can rest assure.