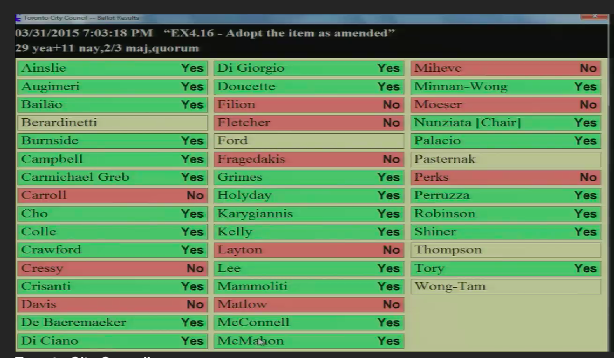 1.  City Council authorize the City Manager to conduct a public consultation process to seek input from Torontonians on the matter of expanded gaming at 555 Rexdale Boulevard (Woodbine Racetrack); including:
a.  a public meeting in Etobicoke;

b.  an online questionnaire promoted on the City's website and via social media;

d.  a presentation at Executive Committee
2.  City Council direct the City Manager to prepare a report for the June 30, 2015 meeting of Executive Committee, which would include an assessment of the technical planning requirements, and merits and potential risks of expanded gaming at 555 Rexdale Boulevard (Woodbine Racetrack); including:
a.  the size and type of facility that would be suitable at the Woodbine location, including:
1.  total number of slot machines; and

2.  total number of other gaming tables
b.  any required land use, infrastructure and other planning matters associated with expanded gaming at the Woodbine site;

c. the potential economic impact (GDP and jobs) of expanded gaming at Woodbine Racetrack and the potential added economic impact of an expanded entertainment and retail destination, including a breakdown of anticipated part-time and full-time employment in the proposed gaming facility as well as projected salaries based on data from comparable casinos in Canada and the United States, and include estimations for:
1.  gaming revenue;

6.  an economic analysis to determine per slot machine how much discretionary income each slot machine would remove from the economy on an annual basis;
d.  the potential risks to the current employment at the Woodbine Racetrack if a new casino were to be located within the GTA but outside of the City of Toronto;

e.  the identification of social and economic development objectives that the City may require as conditions for its approval of expanded gaming at Woodbine, to leverage any new development to benefit local Toronto residents and communities; including recommendations to encourage full time employment.

f.  the potential additional social impact to individuals and families due to gambling-related addictive behaviour and crime; options to mitigate and strategies to address the negative human and social impacts; social procurement opportunities in the development and operation of a casino and related facilities (i.e., convention centre, hotel etc.); City and community use of space agreements for appropriate uses (i.e., local arts, culture, etc);  and measurement and monitoring systems to independently assess Social Contract implementation and effectiveness; and include information on funding for any major research used in this analysis;

h.  the amount of projected revenue to be received by the City as part of a Municipal Contribution Agreement with the Ontario Lottery and Gaming Corporation reflecting projected revenues at the new gaming site including:
1.  total annual revenue to the City;

3.  annual minimum revenue;
i.  the benefits identified in the Woodbine Live initiative;

j.  a framework for ensuring that a Labour Peace Agreement is in place for all aspects of the proposal and a local hiring and training requirement; and

k.  the results of the public consultation, set out in Recommendation 1.

In reply to Clearly the fans have spoken, by Will Yamakva

Love reading your posts Will

Love reading your posts Will because you are spot on. Based off of last weeks response from a couple of participants I expect you will get the same reaction.

In reply to Clearly the fans have spoken, by Will Yamakva

Clearly the fans have not

Clearly the fans have not spoken as this is merely a Toronto city council motion.

Clearly the fans have spoken,

Clearly the fans have spoken, the residents of Toronto have spoken, and the slots and the games are a main reason people go to Woodbine. Not just the runners, the harness folk, not horses in general.

This is a HUGE story to harness, that you need to wake up and realize, that Torontonians are not coming for you and in order for a company like WEG to survive, they need to expand the non-horse biz. Harness profits by having people leave the gaming floor and come check you out. Realize this.... if this was built at Ontario Place, or anywhere else, you would get no residual effect and have FAR fewer spill over people attend Woodbine.

Businesses change..... grocery stores now sell clothes, toys, household items, garden supplies and much more than just food. Simply selling food was not enough. Loblaws is a prime example. If you think just you racing is enough, you are sorely mistaken. As long as you see other gambling as the competition, then you are missing how this works. This is about entertainment and as you can see by the packed slot parlours, racing isn't winning the competition for those dollars. Any spill-over you get, is a bonus for you. Even Wal-Mart knew it had to expand and now is in the drug store and grocery business. Gas Stations now have doughnut stores in them, or other fast food joints, sell gift cards for other stores, and even have deals where they get gas there, and get coupons to other business to survive. McDonalds was a burger joint, now they are a muffin and coffee shop, a breakfast place and have playlands to survive.

You need to realize that these slots are helping you even if you are not getting the same revenue from them as you were. Go ahead and wish slots off your property and treat them like the enemy, and when you have no tracks left to race at, come back here for your "I told you so".

I pray harness people, and more so, the older folks that are fighting the change and unable to see the evolution of gambling and entertainment get with how this works.

One would suggest that WEG

One would suggest that WEG will be spending a lot of money promoting its destination in order to secure a larger entertainment facility. I hope they remember to include the fact that it is, and has for a very long time been a racetrack. Ensure the racing aspect is not forgotten.

Why is this news for

Why is this news for racing?

Next, I am going to see a article on here about Bill C-290 being passed or daily fantasy has become legal!!

You're own your own now horse racing.Why promote the competition!!