On Tuesday, February 5, the Ontario Lottery and Gaming Corp. issued a news release stating that it has reached a lease agreement, in principal, with the Grand River Agricultural Society regarding the OLG’s slot-machine operations at Grand River Raceway.

The release states that the OLG has provided the GRAS with a Letter of Intent, which sets out the general intentions and business arrangements, subject to approvals, between OLG and the site. OLG previously announced it has reached agreements in principal for its slots operations with 10 other site holders. Today’s announcement brings the total to 11 of 14 sites. 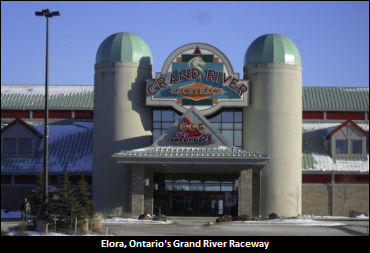 “We are pleased to announce that we have reached a lease agreement in principle for our slots at Grand River Raceway,” OLG President and CEO Rod Phillips was quoted as saying in the release, “We have longstanding and positive relationships with our site holders and look forward to working with them in the future.”

“This is the required first step to continuing the quest to offer horse racing at Grand River Raceway this year," Grand River Raceway GM Dr. Ted Clarke said in a separate statement. "Unlike last month's Woodbine announcement, there is still much to be done. Those meetings begin today.”

The OLG's release states that it hopes to finalize the agreement with the site holder by February 28, 2013, and that it continues to engage in lease agreement discussions with its three remaining site holders across the province.

(With files from the OLG and Grand River Raceway)

The track owners will be getting a fixed payment based on square feet of the casino space only. From what I hear, less than 50% of the old 10% share of the net win hence why you are seeing the changes at WEG and others who have already layed off/terminated. Flamboro and Georgian have yet to sign most likely that GCGC is having a hard time making the lease money work based on the 200 million they invested over the last 8 or so years. They have to still pay for the properties as do WEG and their borrowed money to expand.

There is nothing to tell the horse people as OMAFRA hasn't had discussions with the tracks yet regarding funding. I hear they are starting, but there is lots of work to be done before April 1....tick tock.

Look at the books, Flamboro drives a better Net Win than Georgian and drives more handle. Despite being an old track, Flamboro is more centralized and needs to be a part of the "B" racing model going forward.

The OLG treat the horse

The OLG treat the horse business like a Mushroom farm, they keep it In the dark and once in a while throw some #### (manure) at it!

We are all pissed at the OLG,

We are all pissed at the OLG, what about the track owners .Have any of them given the horsemen any information that may benifit us. The way I see it the track owners will get a percentage of the profit but don't have to use any of that profit towards running the race track portion. We are toast, done like dinner unless the government gives us more than a bone.
This question to our leaders, whomever they may be what was going to be our game plan when this agreement was to expire in 2015, there must have been something in the works. I race not because of the money but for the enjoyment of it. I have a full time job thankfully but I feel for you people that do this for a living.

In reply to Don't know who our lawyers by teesh

My bad, it is 3%.
http://www.standardbredcanada.ca/news/2-9-11/illinois-court-sides-racet…
AND

In reply to “We have longstanding and by duke77

Don't know who our lawyers

Don't know who our lawyers are, if we have any but if we do Norm, please pass on these tidbits of info such as Illinois precedent to them so we can either start or continue building our case.

“We have longstanding and

“We have longstanding and positive relationships with our site holders and look forward to working with them in the future.”
We have seen how they treat good business partners, not much duress put upon them by this crown corporation gone rogue.
April 1st, 2013 the horseman will be in a position to start legal action against the OLG for infringing against their territory. Lets not forget that there is a precedent in Illinois where the supreme court ruled that riverboat casinos in that State ( which are btw not even on premises ) had to give 4% of profits to horseman for infringing upon their territory. Let's hope our associations band together in order to start this legal action. It is our only hope for survival.

What is happening with

What is happening with Georgian Downs. $50 million spent two years ago in expansion, and very profitable casino, a modern 5/8 mile track in a good location, why can't we get any information.