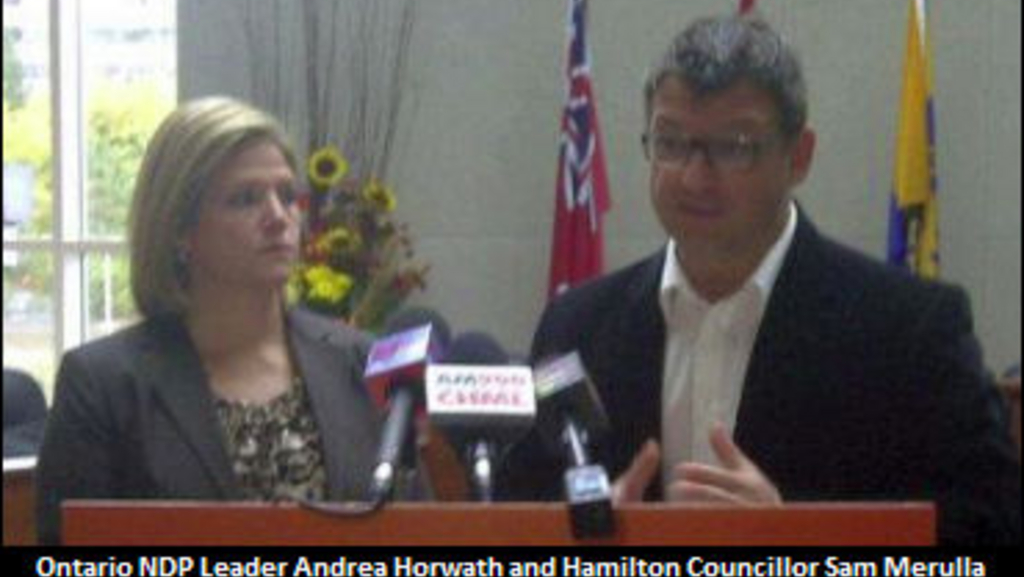 A Wednesday, October 10 press conference hosted by Ontario New Democratic Party Leader Andrea Horwath and Hamilton Councillor Sam Merulla has given the province's much embattled horse-racing industry a shot in the arm in its fight against the minority Ontario Liberal Government's controversial gaming modernization plan.

At the press conference, which took place at Hamilton City Hall, Horwath and Merulla called on the Liberals and the Ontario Lottery and Gaming Corp. to put its modernization plans on hold until potential host municipalities for casinos can definitively gauge constituents on the controversial topic of urban casino expansion via referendum.

An article by the Hamilton Spectator covering the press conference also states that Horwath filed a motion in the Ontario Legislature last week which calls on the Ontario Liberals to postpone the modernization process until the referendums can truly unveil the wishes of taxpayers.

The report quoted Horwath as saying that “It’s time for government to stop talking down to people an open up its ears and listen to people for a change," and that "It’s time to listen to local voices here in Hamilton and in communities across the province, as well as the voices of the people in the horse-racing industry.”

The article states that Horwath has not yet officially asked Tim Hudak's Ontario Progressive Conservative Party to support her motion, but it does point out that PC MP Monte McNaughton submitted a private members' bill earlier this year which would require municipalities to conduct referendums on the controversial issue before the process goes along any further.

The Ontario Liberal Party --- via the OLG, which it governs --- has made it quite clear that it does not support the idea of municipalities conducting referendums to truly find out if residents actually want full-blown casino expansion in their own backyards.

Time for the associations to

Time for the associations to put Ms. Horwath to the test. She let the industry down once and now she is trying to make up for it. Push her to make this happen ASAP and get Mr. Hudak and co to help her put through a non confidence vote of some kind.
Time to put up or shut up Andrea, you let us down once, how will you do this time?

Municipalities are allowed to

Municipalities are allowed to conduct referendums but it would be at their own expense, however, the OLG is not in favor of this which is why they keep pushing cities like Hamilton to make a quick decision at being a host. They also continue to keep sending underlying messages to Municipalities (like Hamilton) that if they don't decide soon, private investors will be brought forth to become willing hosts, thereby leaving the Municipalities with zero profit and zero leverage as to when and where these investors can build and/or expand. It's a bullying tactic, being supported, in whole, by our Provincial Government.

The efforts being made by the

The efforts being made by the opposition parties are appreciated. Problem is, by the time these motions and bills are dealt with, our March deadline will be passed. Parliament is moving agonizingly slow. They are not scheduled to sit again until Monday, Oct. 15. Monte McNaughton's bill has been stuck in committee since May and there are no dates set yet for any meetings . Mr. Millilgan also has put forth a motion calling for an immediate reinstatement of the SAR program with a small change to the revenue sharing. These motions being made will take forever to come up in parliament and be acted upon.

Keep swinging the axe, eventually that Liberal tree will fall.