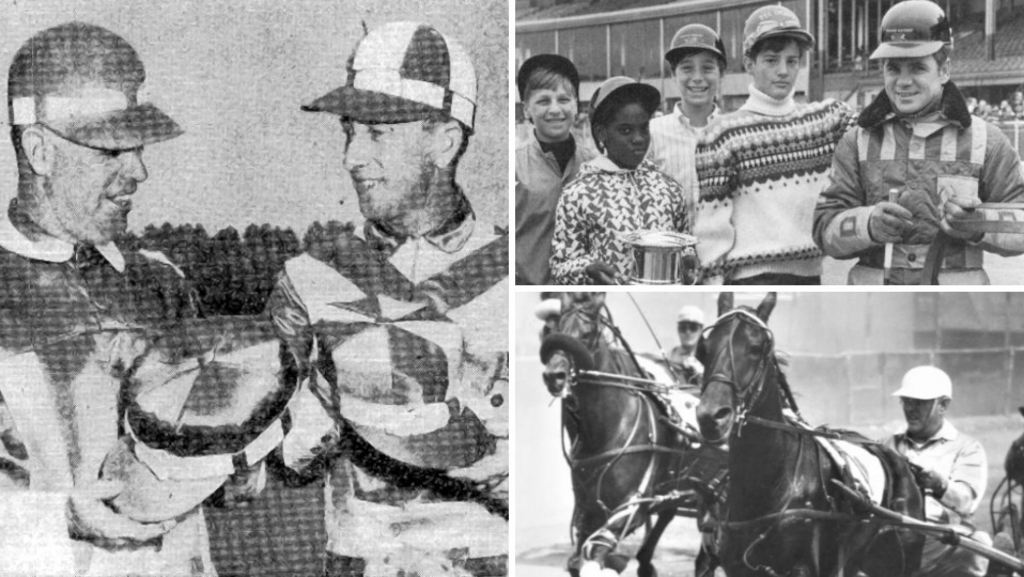 In this week's Rewind Robert Smith takes a long look back at a major happening in the sport of harness racing. Around the mid 1950's  the introduction of safety helmets for drivers became the first real change in racing apparel in over a hundred years.  Yonkers Raceway, one of the two large scale tracks in Metropolitan New York, facilitated one of the first transitions.  His piece contains a few old pictures and short tales about how this change took place way back then.

On the evening of Sept. 17, 1956  racing fans at Yonkers Raceway got a view of what was new in driver's attire.  All of the drivers appearing on that evening's card were wearing the new and revolutionary safety helmets for the very first time.  This history making event was in the works for some time and required the input of a number of individuals.  There had been concern for many years that drivers needed better head protection but getting it done took a fair amount of time.  Each time a serious accident occured the subject was discussed but never resolved.  One particular accident at Roosevelt Raceway in 1953 which seriously injured three drivers further advanced the project.

The man responsible for the protective cap's debut was Lew Burton, the Raceway's General Manager and V.P.  He was faced with two obstacles. First of all he had to convince the drivers that a change was necessary and secondly he needed to find a suitable cap that would provide drivers with the needed protection.  In time,  both hurdles were cleared.  First, he persuaded the drivers to join in.

The engineering force of noted baseball executive Branch Rickey's American Baseball Cap Co. provided the second answer.  That company was already producing a protective cap for baseball players so another type of helmet was needed.  The first requirement was to lower the back of the helmet about 3/4 of an inch to provide additional protection at the base of the skull.  The "new" cap was made of fiberglass, equipped with a foam cushion to provide comfort.  The new cap weighed just under 10 ounces which added to its appeal.

The newly designed caps were tested by the Pittsburgh Plate Glass Co. and the Electrical Testing labs of New York. They received a pressure test rating of between 40 and 50 pounds per square inch.  Also an impact and penetration  test was performed using an eight-pound steel ball dropped from a height of five feet.  The long awaited arrival of protective caps for drivers was finally drawing near.

In the morning of the  race day selected for the introduction of the new headgear, the Raceway provided and presented a personalized cap to each driver competing at the Yonkers track.  Besides being custom fitted, each cap was painted with the exact racing colours of the driver.  It was stated that each driver simply had to wear them; nothing else was required of them. 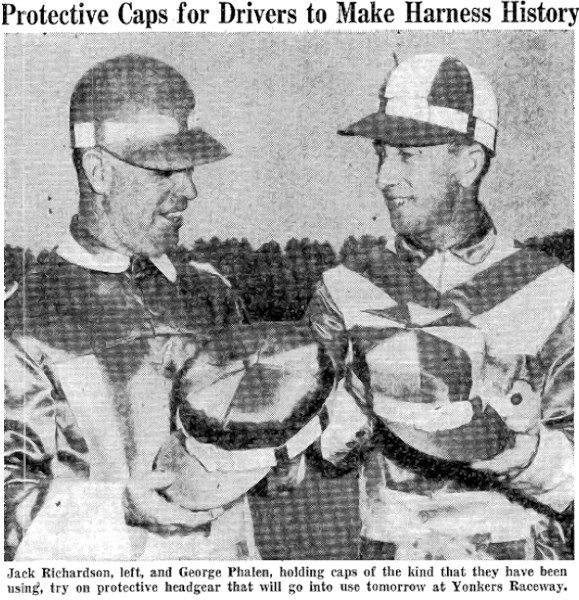 Drivers Jack Richardson (left) and George Phalen are shown with their "old" and "new" driving caps.  It marked the dawning of a new era in harness racing. The old silk hats would eventually fade into history.

Many years after helmets were introduced and became a standard part of every driver's attire,  Yonkers Raceway decided to stage a special event which they called "Helmet Day."  During this era of harness racing it was not unusual for tracks to offer free days to racing fans and they were usually well attended, appreciated and enjoyed by all.

Back on Saturday, October 25, 1969 a cheering throng of 15,000 kids and their parents gathered at Yonkers Raceway for the first ever Helmet Day in harness racing history. They also got to watch Overcall, one of the greatest horses of that era, record his 19th straight victory. It was a big day for the youngsters and the first time many of them had attended a harness race. At that time all tracks charged admission, at least for adults.  On this day the Yonkers management allowed everyone in free.  This might seem trivial nowadays but back then it was probably reason enough for many people to spend a day at the track.

The free-admission card attracted a mammoth turnout of kids and adults and they jammed the grandstand  seating area to overflowing.   The crowd was also five and six deep at the rail. Cars and even buses filled the clubhouse and adjoining grandstand parking lots. Children and their parents started filing into the track at 7:10 a.m. even though it was announced that gates would open at 9 o'clock. Each child, up to 16 years of age, was issued a free helmet as he or she passed  through the turnstiles. 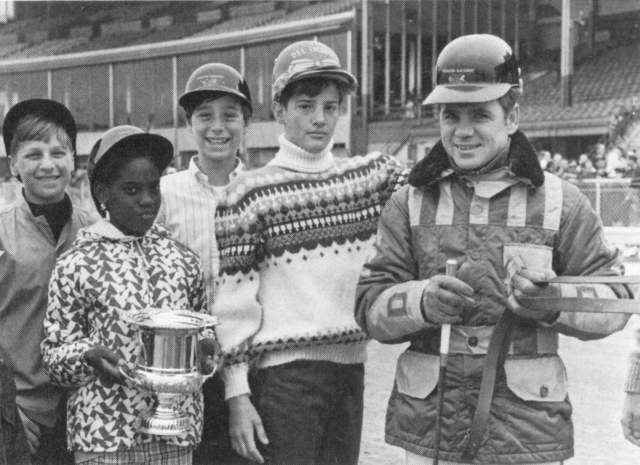 ​
Driver Del Insko accompanied by a group of youngsters tries on one of the helmets given out on Free Helmet Day held at Yonkers Raceway. This 1969 photo was taken in the winner's circle after he drove Overcall to his 19th consecutive victory. One lucky young kid also got to hold the silver trophy presented to the winner. [Harness Horse photo] 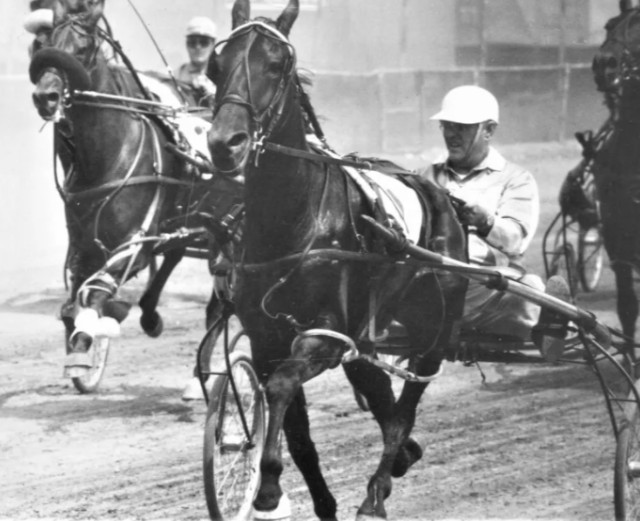 An unidentified driver is shown wearing a very early type of driving helmet. These helmets were lightweight and while an improvement from the old days they did not offer too much protection. 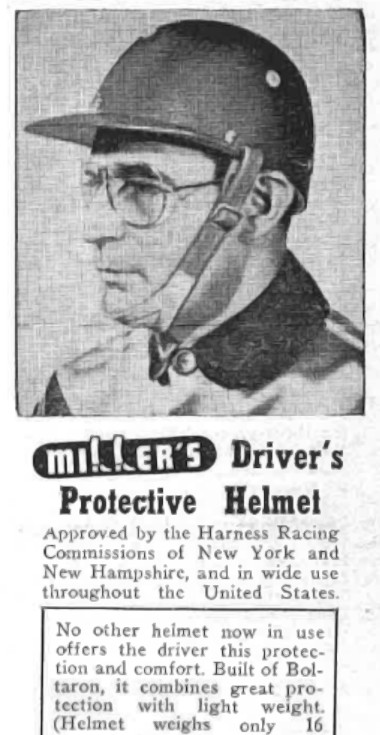 Above is an advertisement for a very early driver's helmet.  Today's helmets are a far cry from this model.

Quote For The Week: "My two favorite kinds of music are Country and Western." - Words of baseball great Billy Martin. 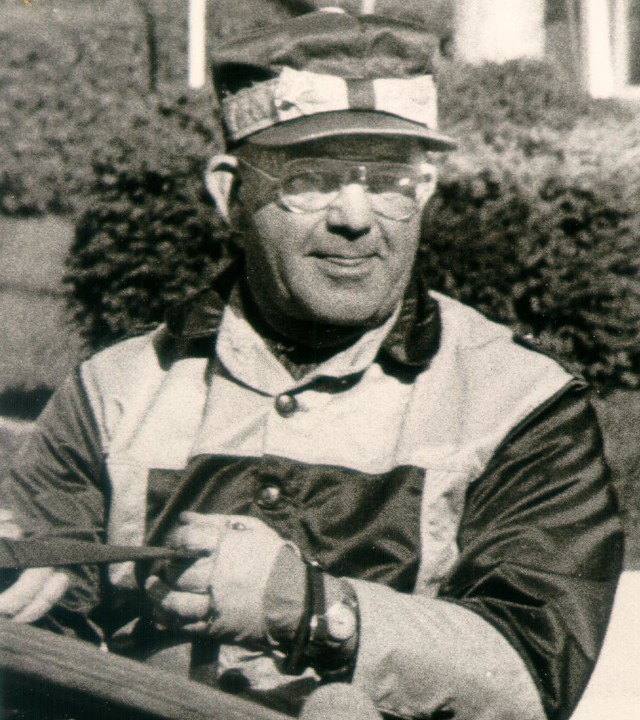 Can you identify this fine horseman from yesteryears? He is from the U.S. and a number of people from his family have been involved in the sport for generations.  He did a lot of his racing in Michigan. 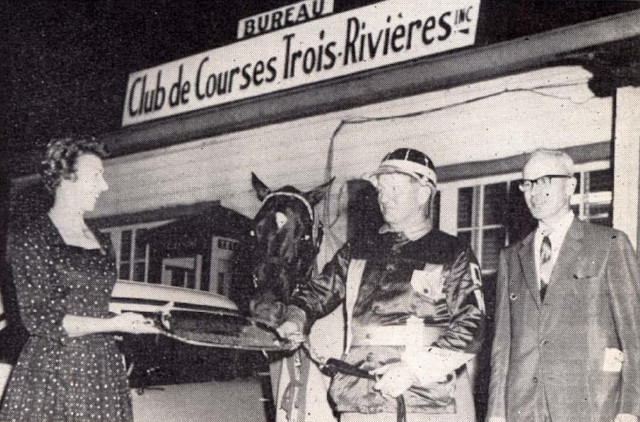 Can you name the driver shown above and if you can; you will probably guess the horse as well? I believe the man on the right whose wife is presenting the tray was the Race Secretary at 3R.  [Harness Horse photo]

Who is it? One of the Ackerman’s, maybe Rollin.
Who else is it? Duncan MacTavish.