The Canadian Horse Racing Hall of Fame and Standardbred Canada are saddened to learn of the passing of H. Charles Armstrong, at age 96.

‘Charlie’ was inducted to the Hall in 2015 as a builder, joining his father, Elgin, who was inducted in the inaugural class of the CHRHF in 1976.

Armstrong was a true icon in the Ontario and North American Horse Industry for over 60 years. Throughout this time, he has represented and participated in multiple disciplines and has been integral in the shaping of Ontario’s horse racing industry and horse industry. Armstrong Bros. Farm, the family-owned operation, was founded in the 1940s by Charlie’s father, Elgin, and uncle, Ted, who were construction magnates. After Elgin’s death, Charlie kept the Armstrong horse business strong.

Charlie’s love affair with horses began when he received his first pony, Playboy, from his uncle Ted in 1930 at the age of 11. The pony had been obtained as payment for a debt and was loaded into the back seat of the family car and taken to Brampton, Ontario. 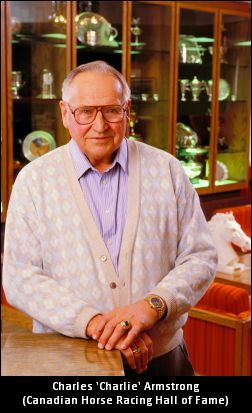 Charlie continued building on the success of his father Elgin, who raced a young filly named Helicopter in the prestigious Hambletonian in the United States. Helicopter was victorious, becoming the first Canadian-owned horse to win the coveted title. Helicopter’s daughter, Armbro Flight, became one of North America’s greatest trotting mares and the foundation mare for the Armstrong Farms breeding and racing dynasty. In 1999, Canada Post issued a commemorative stamp with her likeness to celebrate her contributions.

As Chairman of Armstrong Holdings Brampton Limited, Charlie oversaw the growth of Armstrong Farms into the second largest Standardbred breeding operation in North America. Over 90 per cent of the most prestigious races in North America have had ‘Armbro’ horses in the winner’s circle. Armbro performers have won nearly every classic event in the sport since Helicopter won the 1953 Hambletonian, and has also bred the winners of nearly every classic event, including the Hambletonian (Armbro Goal), the Little Brown Jug (Armbro Omaha, Armbro Operative) and the Adios (Armbro Omaha, Armbro Ranger, Armbro Animate) to name a few. They produced scores of trotting and pacing champions, including Armbro Omaha, Armbro Operative, Armbro Fling, Armbro Feather, Armbro Flight, Armbro Blush, and Armbro Fern. Armstrong Bros. also enjoyed considerable success in the Breeders Crown series, ranking second in the breeding standings and second in the owner standings (through to end of 2003)

The farm was one of the most progressive and profitable Standardbred operations and bred, raced and stood at stud a seemingly endless list of champions. Stallions that stood at the Inglewood Farm most recently included Island Fantasy, King Conch, Camotion, and Dexter Nukes. Other stallions over the years included Jade Prince, Dream Of Glory, Carlsbad Cam, Armbro Emerson, Village Jiffy and Adios Pick, who was sold and went on to become the foundation sire of western Canada.

The family company was dispersed in 2005, but Charlie continued to enjoy international success, as he raised and raced Standardbreds with his daughters under Village Acres Farms in Brampton, Ontario through 2010. They sent out a steady stream of top performers over the years, including Village Jig, Village Connection, Village Jove, Village Blues, Village Jiffy and Village Jericho.

The Canadian Horse Racing Hall of Fame and Standardbred Canada would like to extend their condolences to Charlie’s wife, Lenore; daughters, Jennifer, Caroline and Nancy; and Charlie’s extended family.

In lieu of flowers, donations may be made to the Standardbred Racetrack Chaplaincy of Canada, P. O. Box 331, Campbellville, ON L0B 1P0, or the Alzheimer Society of Ontario.

Charlie was a gentleman in

Charlie was a gentleman in every sense of the word . Kipling's " If " suited him. "If you can talk with crowds and keep your virtue or walk with King's nor lose the common touch". Charlie was a product of Canada's royal family in harness horse racing, the Armstrongs, yet he connected with everyone. His smile, class and dignity will be missed. Most sincere condolences to Lenore and his daughters. May Charlie rest in peace.

My condolences to the

My condolences to the Armstrong family. Charlie was my first employer in the standardbred industry, and he treated all of us like gold. He would often visit with friends at the foaling barn late at night to see what new babies had arrived. One time he even gave us a ride between the barns in his Rolls Royce, dirty boots and all! It was an honour to work for him.

One of the finest human

One of the finest human beings I had the privilege to know. Class personified. Charlie supported me from the first day I opened my own stable and never doubted me through some growing pains and mistakes. We found success eventually, and the joy that Elusive Desire gave Charlie at 80 plus years was infectious. I will be eternally grateful to Charlie, he was more than just a business partner. My condolences to Lenore and the girls, as well as the entire Armstrong family.

A giant, an icon. A void in

A giant, an icon.
A void in the community that can never be filled.

It is with great sadness that

It is with great sadness that I note the passing of Charlie, but also with wonderful memories of one of the true gentlemen of the sport. He loved to share his profound knowledge of the breed. He was not mean, he was kind. He was not self interested. He was generous.
And he always thought first of the best interests of the sport. May we seek to follow his example.

I used enjoy going over to

I used enjoy going over to the Armbro farm and looking at the yearlings before they went off to the sales. The place was spotless everything polished up. And I am quite sure Charlie had a lot do with that. It was a very sad day for me the day they closed their doors. From Nancy and Garth, our condolences to the Armstrong family.