Trainer Marty Wollam is no stranger to what works with young trotters.

The 68-year-old talented trainer-driver -- who is in his fifth decade of conditioning Standardbreds -- rarely misses having a few, and in this case, three talented individuals in the Ohio Sires Stakes Championships.

Wollam will harness a pair of freshman trotting colts and one sophomore trotting filly in their respective $250,000 championships, set for Saturday, Sept.2 at Scioto Downs. First post time is 6:30 p.m.

Joggingtothebank, a son of Break The Bank K notched his first career victory for Wollam on Aug. 24 in Leg 4 of the OSS series. Owned and bred in partnership by Wollam, along with Dale and Julie Ann Sweet of Toledo and Akron, OH, Joggingtothebank finished under wraps to driver Dan Noble, timed in 1:59.2 at Scioto Downs that evening. 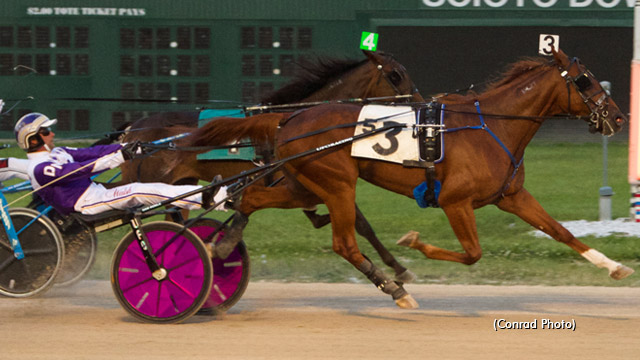 “He’s got a lot of natural talent,” Wollam said. “He’s about as willing as can be and you can do anything you want with him. Plus, he has a strong finish in him. In that last start in the sires stakes, once he got his nose in front he hung on.

Joggingtothebank has $48,540 in his coffers for his connections thus far from five lifetime starts, and besides his lone victory in the OSS, also has two seconds and one third to his credit. He’ll start from post seven in Race 3 with Danny Noble aboard again.

Wollam’s other charge in this same event is the Full Count colt Count On Cody, who has two wins, three seconds and a third in six career starts and a $49,325 bankroll.

He won his second leg of OhSS action on July 18 at Scioto Downs in near wire-to-wire fashion for driver Jason Brewer, timed in a career best 1:57.1.

“I think he hasn’t come close to his potential,” Wollam stressed. “He’s still learning and hopefully he’ll be better for Saturday night. He’s a big growthy colt and kind of slow learner and the Full Counts tend to get a little anxious early. We’ve got his ears plugged to help with that, and it just might take him until next year to reach his full potential as a racehorse, but he’s a really nice animal with a lot of desire.”

Bred and co-owned by Acadia Farms of Canfield, OH, along with G&B Racing of New Wilmington, PA, Count On Cody was a strong second to Sultan Of Cash in OhSS round three at Northfield on Aug. 7 and third in the fourth leg to In My Dreams.

“Both colts are pretty simple overall,” Wollam stated. “Their best attributes are that they’re both very natural trotters.”

“Her best asset is also her biggest fault,” Wollam acknowledges. “She wants to go all the time and gives it everything she’s got. She’s strong at home and once she gets to the races. Kurt (driver Sugg) does a good job of keeping her relaxed in the post parade. She wears ear plugs to help keep her quiet, but once she gets near the gate and around the other horses she gets very excited.”

Purple Sona is a Dejarmbo lass, and is the first foal out of the unraced Donato Hanover mare Sonalona. She was a $30,000 yearling purchase at the 2016 Ohio Select Sale.

“She’s extremely good gaited and once she’s off the gait she settles right down,” Wollam said. “She was very solid in her last start in the sires stakes.”

Purple Sona has earned $125,898 lifetime, with $73,037 garnered this season from four wins and five seconds in 12 starts. She captured her OhSS Leg 4 handily in a front-stepping 1:57.2 on Aug. 25 at Scioto Downs and gets Sugg in the sulky once again.

Despite his many accomplishments, Wollam says he still gets butterflies for the Ohio Sires Stakes Championships.

“I still get very nervous and excited and I think all three of these horses belong here,” he admitted. “I’m also excited and happy for my son Miles, who has Full Surge in the Three-Year-Old Colt Championship. If you don’t still get excited in these big races, you might as well get out.”