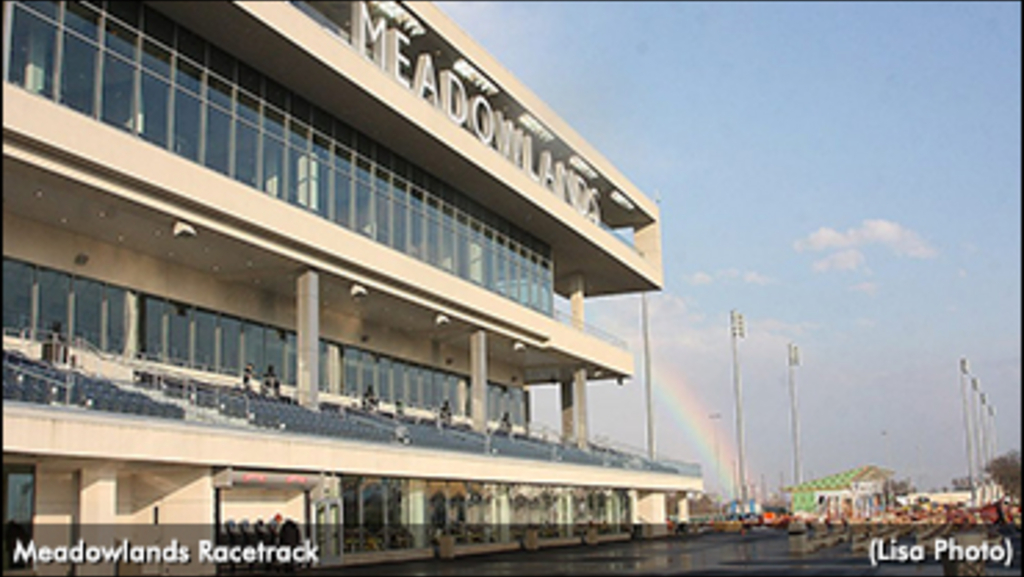 The stage is set for the biggest afternoon of the year on the harness racing calendar: Hambletonian Day at the Meadowlands Racetrack.

The afternoon’s stakes start with five sophomore pacing fillies competing in the $90,525 Shady Daisy fronted by Reflect With Me, who enters off wins in the $194,400 Mistletoe Shalee and the $100,000 Nadia Lobell. The Tony Alagna-trained daughter of Captaintreacherous looks to expand her $625,122 bankroll for owners Brittany Farms LLC and Brad Grant when driver Andrew McCarthy sends her from post 3.

A sextet gathers for the $166,550 Dr. John Steele Memorial, with the five other mares aiming to somehow beat Manchego. Trained by Nancy Takter, Manchego ships to the Meadowlands off a world-record mile in the $250,000 Spirit of Massachusetts Trot, where she trotted over the Plainridge track in 1:49.3. The five-year-old Muscle Hill mare has $2,342,705 banked for owner Black Horse Racing and will have Dexter Dunn in the bike from post 5.

Later in the card, two-year-old trotting fillies compete in the $350,300 Jim Doherty Memorial. Elimination winners Darlene Hanover and Mazzarati will start at the center of the gate, with the former drawing post 5 and the latter post 6.

Racing from off the speed in her first two starts, Darlene Hanover swept from the back to the pack to win her elimination at odds of 12-1 in 1:54.4. Yankeeland Partners LLP purchased the Chapter Seven filly for $130,000 and sent her to trainer Brett Bittle, who notably won the 2002 Hambletonian Oaks with Windylane Hanover. Andrew McCarthy will drive.

Mazzarati composes half of the entrants in the Doherty for trainer Lucas Wallin, a former assistant to Ake Svanstedt. The filly by Cantab Hall came first over to win her elimination in 1:56 with Tim Tetrick in the bike, and will again have Tetrick at the reins in the final. Mazza Racing Stables LLC and Stormi&Bruiser Stable own the $100,000 yearling purchase.

Next on the card, the $229,660 Sam McKee Memorial gathers 11 Free for All pacing horses, among them Breeders Crown winner American History, William Haughton winner Dancin Lou, Graduate champ Hurrikane Emperor and Bettors Wish, who makes his second start on Lasix since scoping sick after the Graduate final.

The competitors of the aged pacing division have traded blows many times already through the abbreviated season, including last week when American History charged from the back to win in the $25,000 Open Pace which served for many entered as a prep for the final. Tony Alagna trains the now five-year-old son of American Ideal for owners Brittany Farms LLC, Marvin Katz and American History Racing while Joe Bongiorno will be in the bike.

Off since winning the Haughton, Dancin Lou neighbors American History from post 2. The four-year-old son of Sweet Lou gives Australian-native trainer Tahnee Camilleri her first start in the Sam McKee Memorial as Brian Sears will drive the potential millionaire for owners David Kryway and 1362313 Ontario Ltd.

Making his first start in nearly three weeks, Bettors Wish ground first over to a third-place finish in a 1:47.2 mile for trainer Chris Ryder, who co-owns the four-year-old son of Bettors Delight with Fair Island Farm and Bettors Wish Partners. With a win in the Sam McKee Memorial, Bettors Wish would propel over the $2-million earnings plateau. Dexter Dunn will drive from post 8.

The $339,000 Peter Haughton Memorial required only a single elimination, and the winner of said elimination benefited from the post-draw privilege and will start form post 1. Plumville Prince, a colt by Father Patrick, came from off the speed with a :27.1 final quarter to win the $20,000 elimination in 1:54.2 with Scott Zeron in the bike for trainer Rick Zeron. The pair famously teamed on Hambletonian day two years ago to win the Hambletonian with Atlanta, who became the first filly in 22 years to win the event (the last being Continentalvictory). Team Zeron will unite again with Plumville Prince for owners Thomas Brice and Charles Receski.

After overcoming post 13 with stablemate Gimpanzee, Marcus Melander trainee Hypnotic AM will have to navigate from post 12 with Brian Sears in the bike. The winner of $624,725 for owner-breeder Courant Inc. enters off a 1:52.3 win in the $15,000 prep event held at the Meadowlands last week. The Jim Doherty Memorial champ will look to become the third ever to win that race along with the Hambletonian Oaks, the only other two ever to do so being Ariana G and Manchego.

The Yoders enter the Oaks this time as competitors, with father Verlin Yoder sending Reba Blue Chip and son J. D. Yoder sending May Baby. Verlin, known for campaigning horses including Natural Herbie and Woodside Charm, sends the filly by Chapter Seven from post 3 off a fourth-place finish to Hypnotic AM in the prep last week. He co-owns the filly with Rachel Yoder.

J. D. Yoder sends May Baby from post 4 following a second-place effort in the prep despite a first-over trip. The filly by Guccio has nine wins to her name from 14 starts and $277,990 earned for James’ wife, Cheyenne.

Sorella will make her first start in about three weeks when she goes from post 7 in the Oaks final. The daughter of Muscle Hill tore the track since the Meadowlands reopened from the shutdown, posting quicker victories leading up to a 1:50.2 mile in the $61,000 Reynolds Memorial on July 11. However the Nancy Takter trainee was foiled in the $253,500 Del Miller Memorial as the 2-5 favourite and finished fourth off a first-over trip to Ramona Hill. The filly will try to get back on track for owners Elmer Fannin, Crawford Farms Racing and Brent Fannin while Yannick Gingras will drive from post 7.

Sandwiched between the two Hambletonian events, the $284,200 John Cashman Memorial features a matchup between four-year-old sensation Gimpanzee and world champion Atlanta. Ron Burke will send the five-year-old Chapter Seven mare from post 2 off a 1:50 second-place effort to Manchego in her world-record mile. Yannick Gingras will drive the earner of $2,088,589 for owners Crawford Farms Racing, Brad Grant and Howard Taylor.

Gimpanzee enters the Cashman undefeated this season in four starts. He last competed in the $464,900 Hambletonian Maturity, where he found position from post 13 and vaulted to a 2:05.4 win going one-and-one-eighth miles. Marcus Melander conditions the son of Chapter Seven for owners Courant Inc. and S R F Stable while Brian Sears will sit in the bike.

For the first time since 2013, the Hambletonian will race as one final dash in the afternoon. Ramona Hill will look to become the 15th filly ever to beat the boys in the Hambletonian following an eye-catching performance in her elimination, where she ripped from last to first with a :25.4 final quarter under minimal encouragement from driver Andrew McCarthy. Tony Alagna trains the Breeders Crown champ for owners Brad Grant, Crawford Farms Racing, Robert LeBlanc and In The Gym Partners. She’ll start from post 5.

The other elimination winner, Ready For Moni, starts from post 1. The Nancy Takter-trained colt by Ready Cash rolled to the lead past the half in his elimination to win in 1:51.3 as the 6-5 favourite. He’ll make just his third start of the year going into the August classic with Yannick Gingras trying for his first victory in the Hambletonian. The colt races for owners John Fielding, Lindy Farms of Connecticut, Herb Liverman and Bud Hatfield.

This year’s Hambletonian features another filly, Sister Sledge. Driven mainly by Yannick Gingras for trainer Ron Burke, the filly by Father Patrick out of 2010 Hambletonian Oaks finalist Behindcloseddoors picked up Brian Seras for her elimination, finishing fourth in a 1:52 mile. She’ll have to overcome post 9 for owners Burke Racing Stable, J&T Silva-Purnel & Libby and Weaver Bruscemi.

The Sam McKee Memorial this year features a $61,540 consolation, which gathers millionaires Filibuster Hanover and Dealt A Winner against several horses at the top of the Meadowlands condition sheet such as Trump Nation, Geez Joe, Donttellmeagain and Our Majordan A, the last of which won the William Haughton Consolation in 1:47.3.

The aged pacing mares will wrap stakes competition in the $177,100 Lady Liberty Final, where Jim King Jr. trainee Shartin N will attempt to rebound following her last start at the Meadowlands when she finished second to 50-1 Major Occasion A in the Dorothy Haughton Memorial.

The seven-year-old mare by Tintin In America bounced back from the Haughton in the $100,000 Clara Barton at Plainridge Park, strolling to a 1:48.1 win over stablemate Soho Burning Love A. Tim Tetrick will drive the winner of 44 races from 60 starts and $2,244,946 in earnings for his LLC along with Richard Poillucci and Joanne Looney-King.

Racing at the Meadowlands for Hambletonian Day 2020 will get underway with the first race slated for 12:00 p.m. (EDT).

Very surprising that Caviart Ally isn't entered in The Lady Liberty. She was the best aged pacing mare in North America last fall, beating Shartin several times, but in the past month her racing career has fallen off. After finishing in the money in every start that she made in 2019, first, she finished 6th in The Dorothy Haughton on 7/18, then she finished 7th on Sunday against a much less talented field at Harrah's Philly. I'm afraid that Brett Pelling has his work cut out for him.