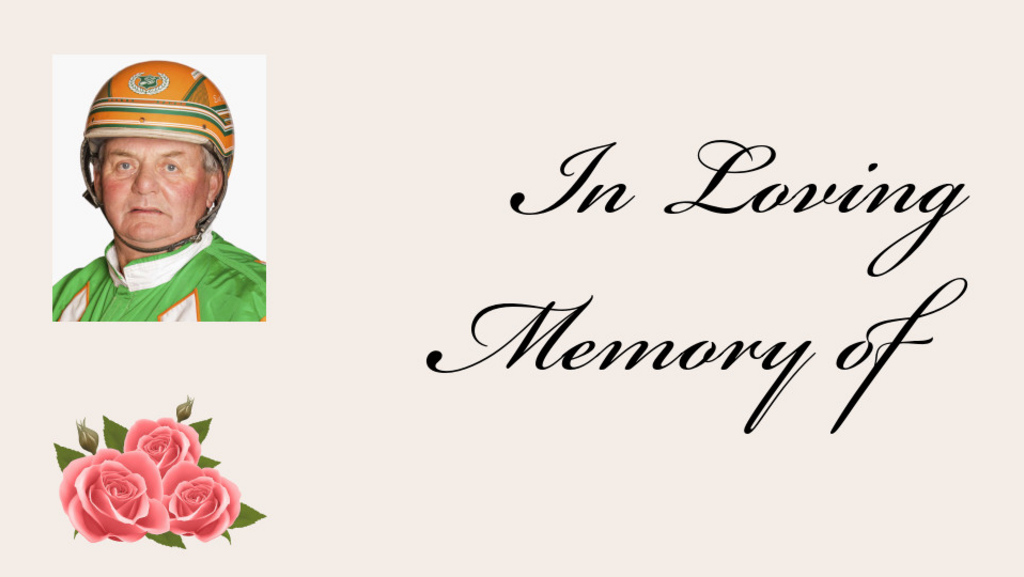 The family of Earl Smith is saddened to share that Earl passed away suddenly at the Queen Elizabeth Hospital in Charlottetown, P.E.I, with his wife and children by his side, in the early hours of July 26, 2022.

Earl was born in the horse racing hotbed of Hunter River, PEI on June 28, 1949. His DNA oozes the horse industry. His father Alan, was descended from a long line of practicing blacksmiths, who operated forges in the New Glasgow and Hunter River areas. Earl’s Great-grandfather, William Smith, operated a blacksmith’s forge in Hunter River from the late 1800s, through the 1920s. Earl’s grandfather, George Earl Smith, was a blacksmith in New Glasgow and Hunter River, from the 1920s through 1955. George Earl also served as the official timer of the ice races in New Glasgow, and at the Charlottetown Driving Park from 1955-1965.

Earl’s mother, Wanda Bernard, had 12 siblings, two of whom, Emmett and Jack were deeply involved in the sport of harness racing. Emmett was one of the stronger personalities in the game in the 1950s and 60s, and would play a pivotal role in Earl’s career. When Earl turned 16, he went to work for his uncle Emmett, one of the first people to operate a public racing stable in P.E.I.

Earl opened a public stable at the CDP in 1968 at the age of 18 and bought his first horse — Dudleys Ace — in partnership with owner Leo Peters for $900, and he was able to grow that passion into a career. His first win came in June of 1968 with Garths Best in a time of 2:12 at Summerside Raceway. Thanks to his tireless work ethic and aggressive style on the track, Earl would climb the ranks to lead the CDP in driving victories in 1979 and 1980, and among the leading drivers at New Brunswick's Exhibition Park Raceway as well.

Earl also raced at tracks in Ontario and Quebec as well in the 1980s before concentrating his stable on stakes horses. For the next four decades, Earl established a reputation in the harness racing world as one of the top stakes race trainer/drivers on the Canadian East Coast. With the stakes season in the Maritimes being the summer and fall months, it meant winters would focus on training the babies. Since that decision to go all in on the Colt Stakes circuit, the Earl Smith stables have captured every major stakes race in Atlantic Canada, some on multiple occasions including the Atlantic Sires Stakes, PEI Colt Stakes, Dairy Queen Futurity, Atlantic Breeders Crown, Duck Acorn Stakes, Anne Shirley Stakes, Lady Slipper Stakes, Joe O’Brien Stakes, Ruffin Barrieau Memorial, Francis MacIsaac Memorial Stakes, Williamson Memorial, Bill Quigg Stakes, Donnie Turner Memorial, The Maritimer, Phil Pinkney Memorial. On July 9, Fern Hill General added the Barrieau-McIsaac Memorial to this accomplished resume.

Since the creation of the Atlantic Sires Stakes program by the Atlantic Standardbred Breeders Association in 1967, Earl is unquestionably one of the top trainers and drivers in the storied history of the program. In 2009, as part of the 75th anniversary, Earl was honoured as the “Top Driver in the entire history of the PEI Colt Stakes.” He was also recognized for his achievements as being one of only two horsemen in North America to have wins through seven decades.

A true highlight of his career was winning the Gold Cup & Saucer in 2008 with Pownal Bay Matt, a race that was recently recognized by fans of Canadian harness racing as having the all-time greatest race call. He was also the developer of pacer Arrive At Five, who took a record of 1:50.4 and earned more than $870,000 in his career while garnering 1994 Older Pacer of the Year honours in the U.S.

Achievements aside, Earl worked on numerous harness racing committees to better the sport and the industry.  Earl is also going to be inducted into the PEI Hall of Fame on August 12, 2022, an event he was much looking forward to.

Earl spent his last day on earth the way he spent everyday for almost 60 years, working at the racetrack. All told, Smith won 2,682 races as a driver while records show 817 wins as a trainer over the last four decades. He will be sorely missed by so many from the barnyard, and the industry as a whole across the country.

Please join Standardbred Canada in offering condolences to the family and friends of Earl Smith.

One of the Best Trainers and Conditioners from the East Coast . He selected, trained , conditioned and raced many colts and fillies for his owners over the years . Many of these horses went on to be very good race horses "up country and in the eastern states ". He had a tireless work ethic and was a really great caretaker of the horses under his care. Many of the younger guys in the business learned the basics of the trade from him , some working with him others just watching . His advise was sought by many and he will be missed! Rest in Peace my Friend!

One of the finest developers of colts in the region over the past half century. He will be sorely missed. R.I.P.

R I P Earl, thanks for the…

R I P Earl, thanks for the wonderful memories, and your winning of the best Gold Cup and Saucer race and finish ever !!