The Red Mile is proud to announce Mark McKelvie as its new track announcer for the Grand Circuit meet.

McKelvie will be taking over the position previously performed by our beloved friend and Hall of Famer Sam McKee, who passed away in early March. Though replacing McKee is an impossible task, we are excited to add McKelvie to the Red Mile team.

McKelvie has grown up in the harness racing industry. His father, Scott, is the director of racing for Mohawk and Woodbine, and his mother, Lori, is a field representative for Standardbred Canada. McKelvie graduated from Humber College in Toronto with a degree in journalism. 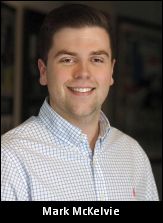 With a desire to enter sports broadcasting, McKelvie took on the role of communications coordinator at Woodbine Entertainment Group, a position he still has today. He later began calling qualifiers as part of his position until he entered the regular rotation of announcers on the WEG circuit.

Over the past 15 years, McKelvie has only missed one Red Mile Grand Circuit meet. The fall days in Lexington garner special memories and feelings for the 24 year old from Milton, Ont.

"There is no better place to be than the Red Mile Grand Circuit on a sunny fall day in Lexington," said McKelvie. "I've always looked forward to coming to the Grand Circuit meet over the years. I know how much the sport looks forward to it, and now I'm honoured to be a part of the magic."

A huge fan of McKee, McKelvie hopes to carry on the excellence that his predecessor brought to the position.

"Obviously, I have huge shoes to fill. I'm not going to try to be Sam McKee because I don't think anyone can be or match him," said McKelvie. "I'm hoping to incorporate the little things Sam always did to make his calls excellent. He made every name sound very important and knew how to make the most out of the big moments. I'm hoping to come in with enthusiasm and keep the legacy of the position going strong."

"The Red Mile is ever cognizant of the future and believes the addition of Mark McKelvie is a great step in that direction," said George Segal, speaking on behalf of the Red Mile ownership group. "He will be working with Gabe Prewitt, who will continue to do colour commentary and post-race interviews. Mark and Gabe are an integral part of the Red Mile's effort to look forward and offer opportunities to young people in this industry. We are always looking ahead and willing to give younger people an opportunity in this industry. While we will sorely miss the sound of Sam McKee calling the races, Mark is an excellent addition for our future."

McKelvie's first race call at the Red Mile will occur on September 28 at 7 p.m., the opening night of what we look forward to be the greatest eight days of racing in North America.

Congratulations, Mark! Looking forward to the Grand Circuit action this fall. Thrill of a lifetime, I'm sure!

Way to go Mark! Congratulations! I am sure both your parents are very proud
of you. Best of luck.