Ohio-bred three-year-old colts and geldings will head postward in seven $40,000 Ohio Sire Stakes leg one divisions on Tuesday, May 2 at Miami Valley Raceway. Post time is 2:05, with the first sire stakes event scheduled as Race 2.

Three divisions of sophomore trotters (Races 2, 4, 6) and four divisions of pacers (Races 3, 6, 10 & 12) will be contested and will feature many of last season’s top performers in the state program. Trainer Brian Brown will harness seven contestants in five sire stakes events, six pacers and one trotter.

“We have 84 horses in training right now at the Delaware County Fairgrounds,” Brown explained. “Of those 84, two are trotters, one two-year-old and one three-year-old. We train in Florida over the winter months — leaving here in late November and return the first of April.”

Brown’s lone trotter in Tuesday’s sire stakes races is Robert H, a son of Dejarmbro—Keystone Twilight, that made one start as a freshman, albeit a winning effort at the Madison County Fair. Robert H will start in the first division (Race 2) fresh off a front-stepping 1:58.1 triumph at Miami Valley on April 24 and will face seven rivals for Ohio owners Jennifer & Brian Brown, Richard Lombardo and Chris McCown.

“This horse is a little close to my heart, as he’s named after my father,” Brown related. “He’s a skinny, long-legged horse and he’s showed us he’s got some talent, so I think he fits well in this first sires stake.”

Hackett winner McRaven — who won that contest on April 22 in 1:51.4 — will start from Post 1 in Race 3 for Brown. The gelded son of McArdle won a pair of sire stakes events in mid-season for Country Club Acres and L&H Management Services of Findlay, OH.

“He had a foot that was bothering him earlier and was bearing out a bit in his last start, and we’ve been working on trying to correct that issue,” Brown said. “But we’ve got a good post and he should be good on Tuesday.” 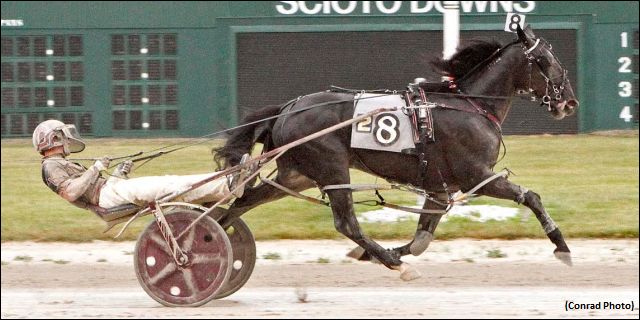 White Jet — another lightly-raced Brown pupil — will start from Post 3 in this same race for the Emerald Highlands Farm of Mount Vernon, OH. The grey son of The Panderosa won his first start of 2017 in an impressive 1:53.2 at Hoosier Park.

“White Jet is a really nice colt and has been a pleasant surprise,” Brown noted. “He didn’t have a good two-year-old season and has really matured into a nice individual.”

The appropriately-named Lightning Onmyfeet is Brown’s seventh race contestant. The speedy son of McArdle paced to a winning 1:52.4 clocking on April 25 in a Miami Valley overnight for owners Erv Miller Stable, D. Robinson, J&T Silva Stables and Stable 45. The bay colt has had just four starts in his career with two wins. He faces the 2016 OSS Championship winner Scotch McEwan, another son of McArdle owned by Xenia’s Carl Atley and trained by Bill Dailey, who will be making his seasonal debut in the OSS division.

“Lightning Onmyfeet cracked a P-1 last year,” Brown explained. “(Trainer) Erv (Miller) was really high on him until that happened. He’s got a world of talent and I expect he’ll be even stronger than he was in his last start.”

Officially Creek, an Art Official gelding owned by Debbie Bird of Ontario, will make his three-year-old debut for Brown in Race 10. A winner of $53,315 last year, the bay gelding won a sire stakes leg at Northfield on Aug. 24.

“This colt just got here from Canada a few days ago and is a brother to Bolder Creek,” Brown said. “I don’t think he’s quite as tight as he needs to be and it might take him a few starts to get up to the speed of the rest of these in his division. He’s a great big horse — very tall and long-legged and just towers over everybody else in the barn.”

Brown’s last two contestants — Barnabas and McThriller — will vie from Posts 8 and 9 in Race 12. The two McArdle geldings will both be making their seasonal debuts — coming into sire stakes action fresh off impressive qualifying efforts. Barnabas, a winner of $84,064 lifetime, paced to a 1:55.2 winning effort on April 26 with Tyler Smith in the sulky, while McThriller, who earned $113,022 last season, paced in 1:55.1 on the same date.

“Both of these colts drew poorly (Posts 8 & 9),” Brown acknowledged. “That makes their job tough. Barnabas had an open bridle in the Hackett as we wanted to calm him down a bit and he got too calm. He wasn’t focused at all, so we put the blinds back on him and he qualified much better and was much more willing to go forward.”

“McThriller is a very nice colt who got good late in his two-year-old season,” Brown said. “He’s a great horse to have the barn — he loves everyone and is just a big pet.”