"This Is What It's All About" 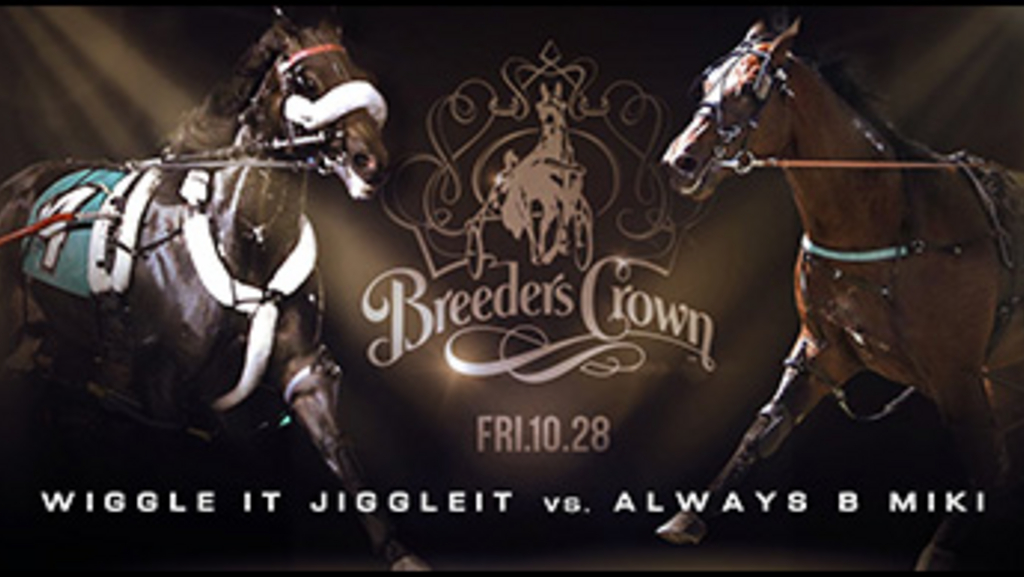 Jimmy Takter needs few words to sum up tonight’s Breeders Crown Open Pace at the Meadowlands, which features a continuation of the rivalry between Takter’s Always B Miki and George Teague Jr.’s Wiggle It Jiggleit.

Wiggle It Jiggleit is the No. 1-ranked horse in harness racing’s current Top 10 poll. Always B Miki is No. 2.

Wiggle It Jiggleit has earned more money than any pacer in history prior to the age of five. Always B Miki is the fastest horse in harness racing history.

Yeah, this is what it’s all about.

“It’s exciting,” Takter said. “Win, lose or draw it’s going to be a great race. It’s great horses meeting up. And great horses can get beat. That’s the way it is.”

When it comes to defining Always B Miki’s place in harness racing history, Takter knows exactly where he would put the five-year-old stallion.

“I think he’s the greatest pacer to ever walk on this earth,” Takter said. “I really do. If everything would have been his way, could you imagine how much even better he could have been? He’s a great, great horse.”

On Oct. 9 at Lexington’s Red Mile, Always B Miki paced the fastest mile in harness racing history, winning the Allerage Farms Open Pace in 1:46. The time eclipsed Cambest’s mark of 1:46.1, which was set in a time trial at Springfield, Ill., in 1993. No horse had ever paced faster than 1:46.4 in a race.

Always B Miki, who was twice sidelined by injuries that forced him to miss nearly a year of action, is the 6-5 morning line favourite in the Open Pace and will start from post four with driver David Miller. The event is one of four Breeders Crown races at the Meadowlands on Friday, with an additional eight Breeders Crown races Saturday at The Big M.

Since returning to action last fall, Always B Miki has won 14 of 20 races and finished second five times. He will try to become the first horse to win the Open Pace in consecutive years since Bettor Sweet in 2011-12. Always B Miki’s wins this year include the Ben Franklin Pace, William Haughton Memorial, Jim Ewart Memorial, and Hoosier Pacing Derby.

Wiggle It Jiggleit, a four-year-old gelding, has won 38 of 50 career races and earned $3.95 million. Starting from post seven with driver Montrell Teague, he is 8-5. His wins this year include the Canadian Pacing Derby, Dan Patch Invitational, Joe Gerrity Jr. Memorial, Dorothy Mullin Invitational, and Battle of Lake Erie.

“I’m very happy for George,” said Takter, who shares the same birthday, Sept. 29, as Teague. “He’s done a wonderful job with that horse and they’ve done great for the sport promoting it. They’re great people and do a lot for the sport.”

“It was a magic night,” Takter said. “Things have got to go your way so good. It worked once in my life like that and I’m very grateful to have been involved in it. I don’t ask for it again.”

“Ariana G was a little too grabby in her elimination,” Takter said. “She’s definitely the best two-year-old filly out there, but she’s got to overcome that. She can’t be too grabby like that. I trained her this week and she felt very good. We did a couple of (equipment) changes and opened her up and added some things to try to help her relax. I think it’s her race to lose. But it’s a very good group of trotting fillies.

“I like all three of mine. Thats All Moni was fantastic first-up last week. She could sneak around and maybe surprise. She’s got a good quick brush. Princess Aurora got post 10, which was unfortunate because she raced awesome in her elimination. She probably trotted in :55 the last half. She’s a very good filly, a little sleeper there.”

All The Time, who was sidelined for nearly two months because of colic surgery following her victory in the Hambletonian Oaks, won her Breeders Crown elimination. The other elim was won by last year’s Dan Patch Award winner Broadway Donna.

“It almost brought tears to my eyes to see her do what she did,” Takter said about All The Time’s win. “When I started her back after I got clearance from the veterinarian she didn’t look good physically because she lost a lot of muscle tone. It’s just amazing how fast she came back. She looked great and she finished strong. I think she is going to be very close.

“I thought Broadway Donna raced really good from the 10 hole (in her elimination). All The Time, she’s just a champion. If she wins this one it’s going to be a heck of a story. She’s just a fantastic horse.”

Bar Hopping is one of three Takter trainees in the three-year-old male trot, along with Love Matters and Lagerfeld. Bar Hopping and Sutton won last week’s eliminations. It was Bar Hopping’s fourth win in his last five starts. His only setback was a third-place finish behind Marion Marauder and Southwind Frank in the Kentucky Futurity.

“I thought Bar Hopping was maybe Saturday’s best performance, the way he looked down the stretch, he just opened up like a great horse,” Takter said. “When he goes by horses, he goes by them big. But sometimes he kind of hesitates and just hangs there.

“He didn’t have a good race in the Futurity. I thought Tim (driver Tetrick) gave him a perfect trip and he should have won that race. I was very disappointed with that race, but I was very proud of him in the Breeders Crown elimination. We’ve got to do it in the big time, but I consider him a good shot. He’s going to be a player.”

On Friday night, Takter will send two-time Breeders Crown champion Shake It Cerry into the Breeders Crown Mare Trot. It is expected to be the final start of her career. She has won 29 of 60 lifetime races and earned $2.75 million. She was Trotter of the Year in 2014.

“This most likely will be her last race,” Takter said. “She’s starting to get a little tired. She had a wonderful career. What a wonderful horse she’s been for us.”

OMG Nicholas.... you are

OMG Nicholas.... you are exactly right as I have always been a huge supporter of Mario too in that if he played anywhere near healthy, or had part of the line up others had, he would have broken almost every record out there.
He still did playing hurt his whole career.

Oh Mr Scott. There you go

Oh Mr Scott. There you go again.
Niatross was a much better horse. His record stands for itself.

What another incredible race

What another incredible race by these 2.
Wiji gave it all he could after setting really slow fractions but once Miki was fed clear track, Miki's long legs took over for a 3/4 length win.
The time was essentially slow due to the slow pace these 2 got away with early.
53.4 back half sprint.

What a great race. Nice to

What a great race.
Nice to see Miki "Smoke" Wiji. A larger amount than WIJI put on him the previous...
Advantage... Miki.
Well Mikey it will be interesting to see the ratings next week.
I assume nothing more than 10 points will separate these 2 warriors.

Rankings will be interesting this week. It will be tight.
Then again maybe it doesn't come down to the Breeders Crown
One race left. The TVG...
It all comes down to the TVG final. November 12...
These 2 are so incredibly GREAT for the sport...

My pesos are on WIJI, and if

My pesos are on WIJI, and if he doesn't win he is still ranked number UNO world wide ! :)

Always B Miki is the Mario

Always B Miki is the Mario Lemieux of hockey. Even with all the health issues, he still performs extraordinary when he races. If her ever gets a pocket drive and the fractions are extremely quick, I'm sure he can probably go under 1:46.