The field in Friday’s $600,000 Breeders Crown final for two-year-old female pacers is as deep group as any, with the 10 fillies combining for 51 wins and 74 top-three finishes in 87 races.

Queen Of Success won last week’s single elimination by three-quarters of a length in 1:50.3, handing runner-up Niki Hill and third-place Sea Silk their first losses of the season. 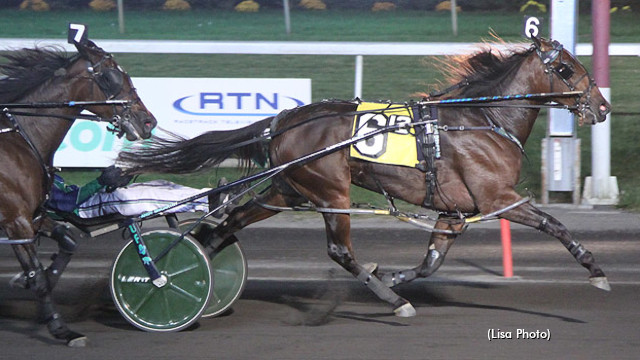 Queen Of Success, a daughter of Captaintreacherous out of Cashaway, has won five of eight starts. She was 10th in the She’s A Great Lady Stakes, won by Niki Hill, at Woodbine Mohawk Park but bounced back with a second-place finish to Niki Hill in a division of the International Stallion Stakes in her race prior to the Breeders Crown elimination.

“She hit a few bumps in the road but her last start in Lexington when she was second to Niki Hill showed us that she was coming back to what we thought she was early,” trainer Tony Alagna said. “The only time this filly showed a little chink in her armor was when we took her to Mohawk. She just didn’t get over the track well, just wore herself out and was scrambling. I was a little concerned about the limestone here (in the elimination), but she was super.”

Queen Of Success is owned by Alagna Racing, Caviart Farms, and Robert LeBlanc. She will start the Breeders Crown final from post five with driver Andy McCarthy. She is one of three finalists for Alagna, with bye recipient Dont Fence Me In and Boudoir Hanover.

Dont Fence Me In, who won the Kentucky Championship Series final, has four firsts, four seconds and a third in nine starts. The daughter of Captaintreacherous-Mystery Game will leave from post six on Friday.

“She’s been very good, solid,” Alagna said. “She had a great run in Kentucky, and she was very good qualifying (in 1:52.1 last week). She’s matured a lot over the year, so I think she will have a nice year next year too hopefully. She’s a nice filly.”

Boudoir Hanover, by Captaintreacherous out of Bedroomconfessions, will start from post nine. She has won two of 10 races, including a division of the Bluegrass Stakes, where she beat Lyons Serenity.

Lyons Serenity, who has won seven of 10 races and finished second twice, also received a bye to the final. She will start from post eight for trainer Jim King Jr., who also sends out Captain Cowgirl in the final. Lyons Serenity counts the Kentuckiana Stallion Management Stakes among her triumphs. Captain Cowgirl was the Pennsylvania Sire Stakes champ.

“I thought the bye would suit (Lyons Serenity) fine,” King said. “She’s a really good trainer; I can train her in racehorse time if I feel the need. I think she will be just as ready by not showing up as she would be if she did show up. And she couldn’t get eliminated this way.

“(Captain Cowgirl) might be playing ball in the wrong park, or just a step above where I would like her to be, but she’s a pretty nice filly. I’m certainly not ashamed of her. Both of mine in there, I don’t feel like they’re winners — I hope they do — but hopefully we can get paid. You can’t win ’em if you’re not in ’em. What better place to be than right here?”

Niki Hill, a five-time winner on the Grand Circuit in seven starts, will look to bounce back from post seven in the Breeders Crown final.

The Breeders Crown final for two-year-old female pacers is the seventh race on Friday, the second of the card’s four Breeders Crown championships for two-year-olds. The live card of harness racing begins at 6:20 p.m. (EDT). To view the entries, click on the following link: Friday Entries - Meadowlands Racetrack.

Breeders Crown finals for horses ages three and up are Saturday at The Meadowlands. Racing gets underway at noon Saturday.