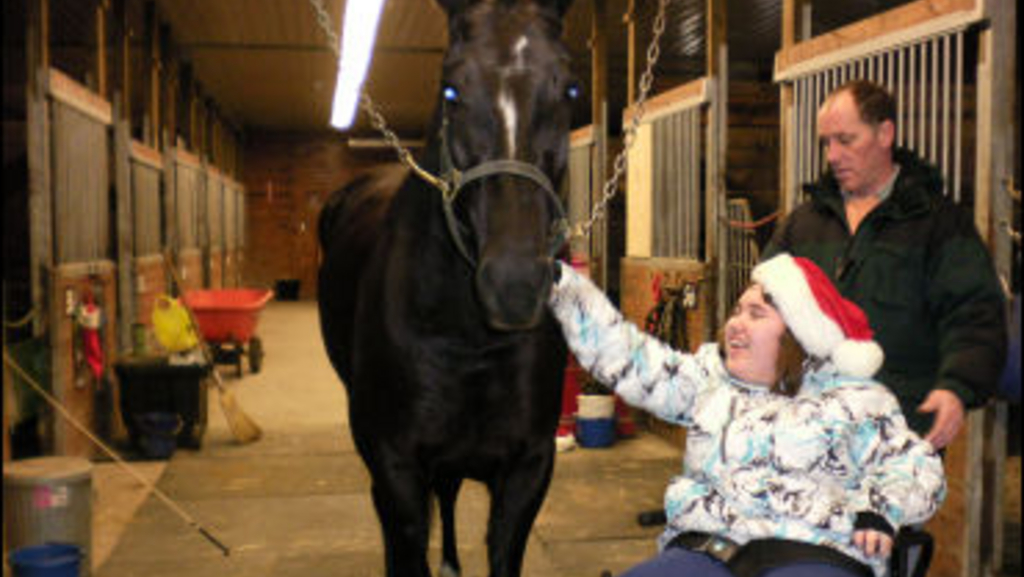 All Sydney Weaver, one of harness racing’s biggest fans, wanted for Christmas was a racehorse.

The 12-year-old resident of Acton, Ont. has immersed herself in harness racing the past few years, attending the races at tracks throughout the province and making friends with many of the sport’s participants. Longtime harness horse owner Cesar Kowalski, a friend of the Weavers, made Sydney’s wish come true.

Kowalski, who has been active as an owner in harness racing for over 30 years, met the Weaver family over two and a half years ago at Mohawk Racetrack. It was a rainy day and Kowalski arranged for Sydney to take part in a winner’s circle photo. “We’ve been friends ever since,” said the retired welder. “She’s a great gal and she is very motivated.”

Cesar was writing a Christmas card to the Weavers, and when he phoned to confirm their address, Don, Sydney's father, mentioned to Cesar that Sydney wanted a horse for Christmas. All the while, Cesar’s wife had been researching a horse by the name of Sydney Seelster. They tried to buy the horse outright, but that didn’t work out, so they entered a successful claim on the pacing mare on Sunday, December 23 at Flamboro Downs.

Kowalski arranged for the Weaver family --- Sydney, Don and his wife, Lisa --- to meet him at 8:00 a.m. on Christmas morning at the Campbellville Training Centre, telling Sydney that he had some books that might be helpful to her in studying to get her trainer’s license. She had to get them that day because he was heading up north.

When Sydney got to Debbie O’Brien Moran’s stable, there was a wrapped gift for her. Cesar gave Sydney the present, which was a plaqued photo of Sydney Seelster that had an engraving which named Sydney as co-owner.

“She was in awe,” said Kowalski. “I’m not sure if it’s sunk in yet.” They put the mare in the cross ties and Sydney spent most of her Christmas morning brushing and grooming her. “She was a good investment for me and she’ll be great for Sydney,” said Kowalski. 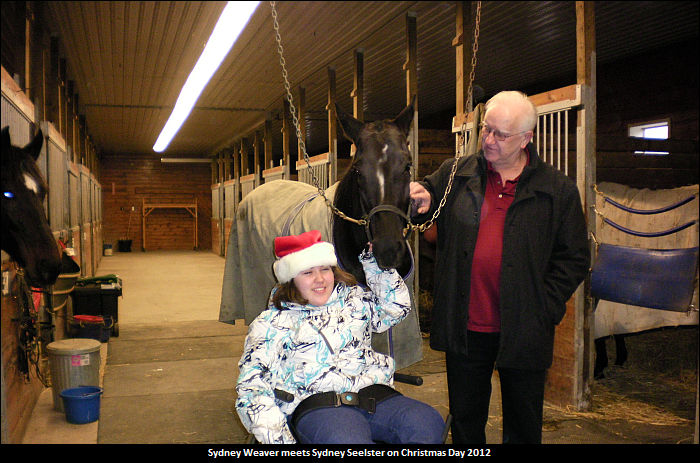 Sydney Seelster wears pink harness, has her own Facebook page, and will be racing for the second time for her new connections this Saturday at Flamboro Downs (Race 3). Her cheering section, led by Sydney (Weaver), will be easy to spot --- they’ll all be wearing something pink!

Despite being in a wheelchair, Sydney knows no boundaries. Along with her parents, she can be found at racetracks throughout the province on major events days and any given day.

Sydney achieved her long-time dream of being able to jog a harness horse this past spring following her 12th birthday, with a little help from two of her biggest fans, Ron Waples and Bill O’Donnell.

Sydney’s can-do attitude, caring nature and unflinching enthusiasm for the sport have endeared her to legions of Ontario harness racing participants over the past couple of years.

All persons I have met in the

All persons I have met in the horse industry have the biggest hearts and again this just shows another with a huge heart!! Such a touching story.

Our neighbour is a supporter

Our neighbour is a supporter of Sydneys' and wants to donate some hay on behalf of the LOL 677 at Britton,On

Good luck to Sydney tonight!
Maybe she could invite Mr. McMeekin to join them all for a night at the races.

It couldn't have happened to

It couldn't have happened to a more deserving little girl. You are an inspiration to us all. Good luck tomorrow night at Flamboro.

What a wonderful story.

What a wonderful story. Horses are great therapy to so many of us. You don't have to be in a wheelchair to reap the benefits of just being around these amazing animals. Those of us who are priveleged to have horses in our lives know the value of a human/equine relationship. I'm so glad to hear about Sidney's (both of them)new partnership. Good luck with your horse and friend Sidney. May you both enjoy many happy hours together.

This is a wonderful tale and

This is a wonderful tale and one that is sure to warm the hearts of everyone ,racing fan or otherwise . Congratulations and thanks to everyone involved in making this possible and a special "Thanks" to SC for carrying this story .

Beautiful...I love these stories !! This is what life is all about. Beautiful people, beautiful horses :) (Fran Brethour)

Now how could OLG slots take

I'ts too bad that Mr. Duncan

I'ts too bad that Mr. Duncan and McGuinty and the rest of the sceptics couldn't read this. According to them, horsepeople are all a bunch of overpaid, out-for-the money losers. NOTT!!!!!!!!!!!!!!!!!!!!!!!. Hats off to Cesar and ALL THE BEST OF LUCK to TEAM SYDNEY.

A very heart warming thank you to a generous and kind man, Mr. Kowalski for making a handicapped child's dreams come true, this kind christmas gift will stay with her for the rest of her life and also make her stonger in facing the facts that life has dealt her. Also to her parents that have helped to make a child's dream come true,with the caring and loving they give her, and let's not forget Ron Waples and Billy O'Donnell,I cannot find another group of people who help other people, like the people involved in HORSE RACING. Have a good day.

now these are the good deeds

now these are the good deeds that we all love to hear and share,,,MAY THE LORD BLESS ALL INVOLVED,,,and i challenge everyone out there involved in horses to do a kind act of some sort to someone each and everyday,,,your neighbour can be anyone and you do not have to go around the world,there is someone hurting close to you. thank you friend for this kind way of showing love Mike