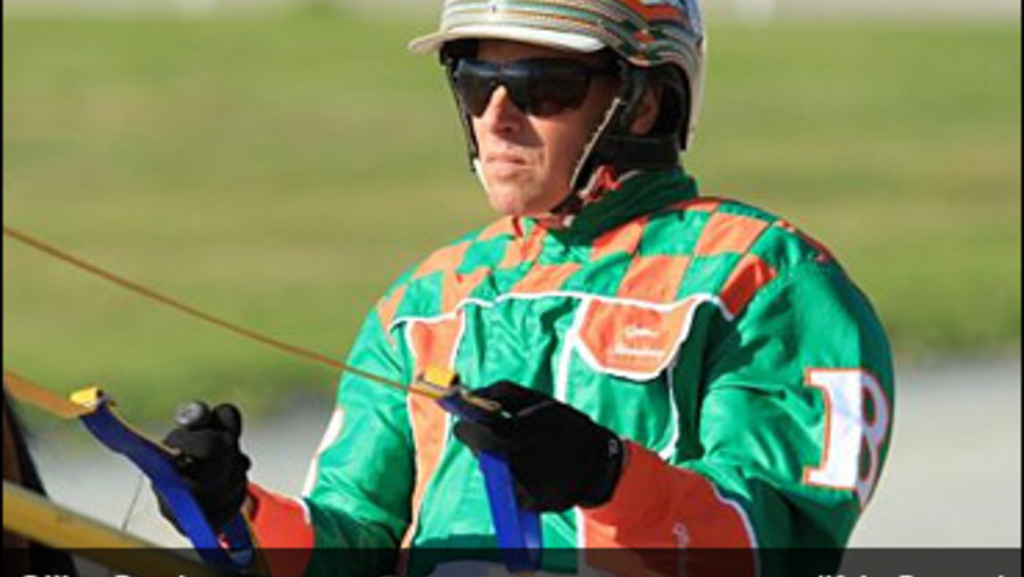 Gilles Barrieau enjoyed a banner day on Saturday (Sept. 5) at Exhibition Park Raceway, recording seven driving wins on the 10-race card and sweeping all three divisions of the Milton Downey Memorial, including both splits for rookie pacing colts and geldings with his own trainees.

Barrieau steered Steel Reefer ($2.10) to a pillar-to-post win — the third of his career to date — in the first $6,280 Downey division for two-year-old pacing colts and geldings (race three). The Steelhead Hanover gelding secured the early advantage from the pole and rated a :58.2 first half before facing a mild first-over challenge from Woodmere Alvin (Redmond Doucet) up the backstretch. After hitting three-quarters in 1:28.1, Steel Reefer extended his lead on the far turn as Woodmere Alvin broke stride. He continued to draw away in the lane, and evaded eventual runner-up Fern Hill Flight (David Dowling) by 5-1/4 lengths in 1:57. Suthen Guvna (Michael Downey) finished third.

Dustylanegoliath ($5.60) gave Barrieau a training and driving sweep of the Downey colt splits with a 1:58 score in the second division (race seven). The son of Steelhead Hanover yielded to fourth in the race's early stages, racing 4-1/2 lengths behind a :29 first quarter set by Rotten Ronnie (Doucet) before unleashing a first-over attack nearing the half in 1:00. Dustylanegoliath ground down Rotten Ronnie and seized the lead approaching three-quarters in 1:29, and sped off through the final turn en route to a commanding five-length score. Saltwater Savage (Mark Bradley) salvaged second as thee odds-on favourite, and Rotten Ronnie faded to third.

Dustylanegoliath scored the second win of his young career for owner Daniel Ross.

In the lone Downey split for two-year-old pacing fillies (race five), Woodmere Stella ($3.20) held her ground under heavy pressure to record a 1:58.3 win, the second of her career.

After yielding for the pocket behind Tobins Brownie (Dowling) through a :28 first split, Barrieau brushed to the fore with Woodmere Stella and rated middle splits of :57.4 and 1:28.1. On the final turn, Somebodys Me (Doucet) intensified her first-over bid and worked to a narrow lead a furlong from home. Undeterred, Woodmere Stella fought back in the lane and defeated Somebodys Me by a length. Need To Know (Jason Hughes) was elevated to third after Tobins Brownie drifted inside the pegs in the stretch.

Earl Smith trains Woodmere Stella, a daughter of Steelhead Hanover, for the Next Generation Stable.