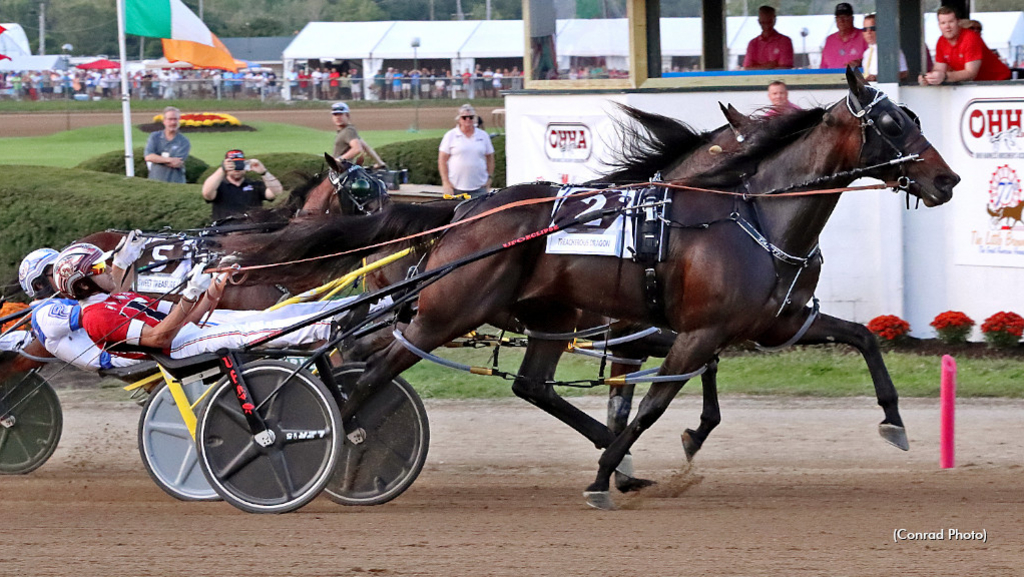 After winning the first elimination heat in 1:50 flat earlier in the day, the Nancy Takter-trained Treacherous Dragon and driver Dexter Dunn got post two for the finale and secured a perfect pocket trip behind the 1:50.1 second elimination winner and supplemental entry Sea Silk and Chris Page as they forged to the front from the inside post.

Sea Silk had the eight-horse field lined up in post position order through a :27.4 opener and got a second-quarter breather to the half in :56.4 before Just Divine (Jordan Stratton) was flushed first-up from third and pressed the 3-5 pacesetter down the backstretch to three-quarters in 1:23.4.

Sea Silk turned for home with Just Divine starting to tire on the outside and A Girl That Twirls (Tim Tetrick) rallying three-wide off cover, but the stretch drive turned into a race off of the elimination winners as Treacherous Dragon pounced from the pocket. She collared Sea Silk as they approached the wire for the 1:51 victory by a neck. Sweet Treasure (Andy McCarthy), another supplemental entry, closed up the inside to give Takter a 1-3 finish.

"I wasn't getting the front around Page and sat in the two-hole," explained Dunn after the race. "I was tossing out when I was going to come out but it was really depending on when the outside flow came and it came too early for me, so we took a shot at getting some luck and she got out late coming off the last turn, but she rallied very good in the stretch."

"I kind of was expecting that [a two-hole trip]," said Takter. "You know, when she drew the two-hole, I figured that's where she may end up, but she raced super. She's a very game filly so I knew if she just got room, she was going to go all the way to the wire." 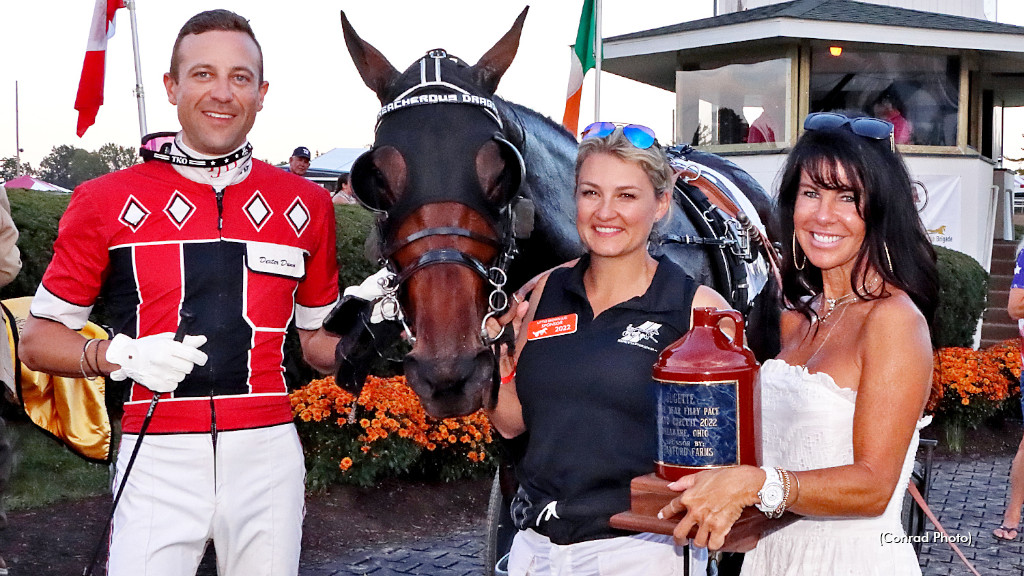 The Captaintreacherous-My Little Dragon filly added the Jugette to her resume that includes a victory in the Fan Hanover Stakes this past spring.

After sweeping the elimination and final, she now has eight wins from 13 starts and hit $500,000 earnings mark this season for Hot Lead Farm of Allentown, New Jersey.  Treacherous Dragon improved her lifetime record to 12-4-4 from 22 starts and boosted her career bankroll to $747,328.

When asked what's next for the Jugette champion, Takter noted, "I've got to think about it for a bit because you can't race on Lasix in Lexington and obviously Lasix made a difference for her so we'll have to go back to the drawing board, but she does have the Breeders Crown and that's the ultimate goal at the end of the year."

Recaps of the Jugette elimination heats follow with coverage of Wednesday's undercard available by clicking here.

Favourite Treacherous Dragon fought off A Girl That Twirls to win the first of two $25,000 eliminations for the 52nd edition of the Jugette for three-year-old pacing fillies on Wednesday afternoon (Sept. 21) at Delaware County Fairgrounds.

Driven by Dexter Dunn, 3-5 favourite Treacherous Dragon fired off the gate from post two and led the field of five through a :26.2 opening quarter and half in :55.

A Girl That Twirls, with Tim Tetrick picking up the catch-drive, then moved first-up from fourth heading into the backstretch with Trick Of The Light (Trace Tetrick) following her cover.

Treacherous Dragon continued to lead the way to three-quarters in 1:22.2 with pressure mounting as 2-1 second choice A Girl That Twirls matched her strides turning for home. However, Treacherous Dragon dug in down the lane to prevail over that filly foe by one length in 1:50 flat. Trick Of The Light finished third while Galleria Hanover (Ronnie Wrenn Jr.) finished fourth, edging out Allnight Miki (Aaron Merriman) for the remaining spot in the final.

"Timmy [Tetrick with A Girl That Twirls] travelled up pretty strong," said Dunn after the race. "I was pretty confident in my filly; she still felt like she had a bit left. Coming off the last turn, I thought Timmy might of had me but the filly came back in the stretch." 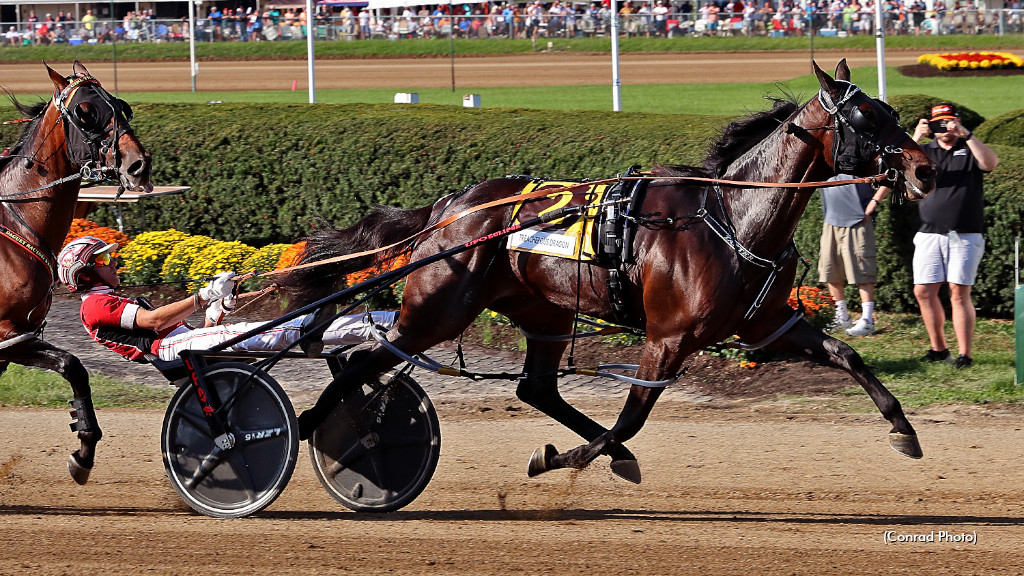 The Captaintreacherous-My Little Dragon filly earned her seventh win from a dozen sophomore starts while bumping her seasonal earnings to $397,666 for Hot Lead Farm of Allentown, New Jersey. She is trained by Nancy Takter.

The winner of the Fan Hanover Stakes this past spring, Treacherous Dragon entered the Jugette elimination off a 1:51 qualifying mile at The Red Mile on Sept. 11 with the addition of Lasix.

"It's a big thrill, for sure," said Dunn, who won the 2020 edition of the Jugette with Party Girl Hill and is looking to make it back to the winner's circle later today. "It's a great week. I like being here so it's great fun."

Sea Silk ($2.80) showed why she was a $15,000 supplement to the Jugette with a facile 1:50.1 score in the second $25,000 Jugette elimination heat. Driver Chris Page sent the 1/2 favourite to the front from her rail position, and then yielded to stablemate Just Divine (Jordan Stratton) heading to the opening quarter. Page wanted no part of the pocket and came right back out for the retake through a :27.1 opening panel.

From there, Sea Silk looked well within herself through middle splits of :55.4 and 1:23.2, repelling the first-over bid of Sweet Treasure (Andy McCarthy) before sprinting home in :26.4 with plugs in and Page still as a statue to trip the timer in 1:50.1.

Just Divine got up for second over Sweet Treasure with Wine N Dine Me (Tim Tetrick) nosing out Smuggle Tina (Dave Miller) for the fourth and final spot on the gate in the $205,100 Jugette final.

"I kind of wanted to control my destiny. Obviously we drew for post positions and I just happened to draw the rail so I was taking full advantage of that," stated Page in the winner's circle. "She finished with the plugs in and had some pace so we should be ready to go for the next heat." 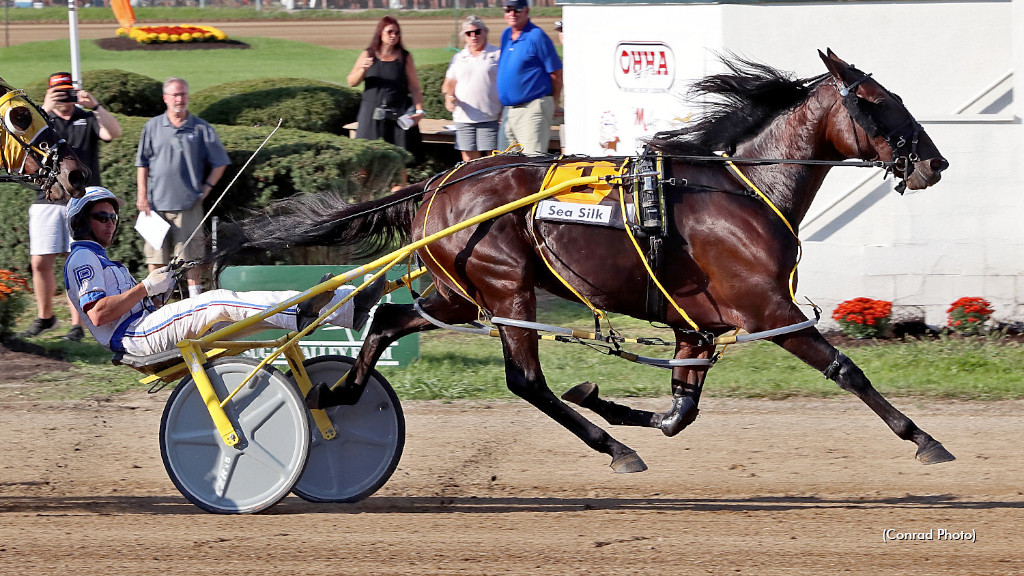 "She is just unbelievable and Ronnie has done such a great job, and this guy (motioning to Page) is driving her great," said co-owner Bud Hatfield of Hatfield Stables. "It'd mean a lot, we've never won a Jugette, so we're trying...hard."

The post position draw for the Jugette Final is as follows:

Live video is available for the Wednesday (Sept. 21) card of harness racing at the Delaware County Fairgrounds, headlined by the 52nd edition of the Jugette for three-year-old pacing fillies.

Video and PDF programs for the Wednesday card are available below.

Trainer Ron Burke, who won last year's Jugette with Scarlett Hanover, holds the record for most wins in the Jugette with four. He will have three shots in this year's event with Galleria Hanover, Sea Silk and Just Divine. Nancy Takter has a pair of contenders in Treacherous Dragon and Sweet Treasure.

The connections of Sea Silk and Sweet Treasure supplemented to the Jugette for a fee of $15,000.

The complete fields for the elimination heats are listed below in post position order.