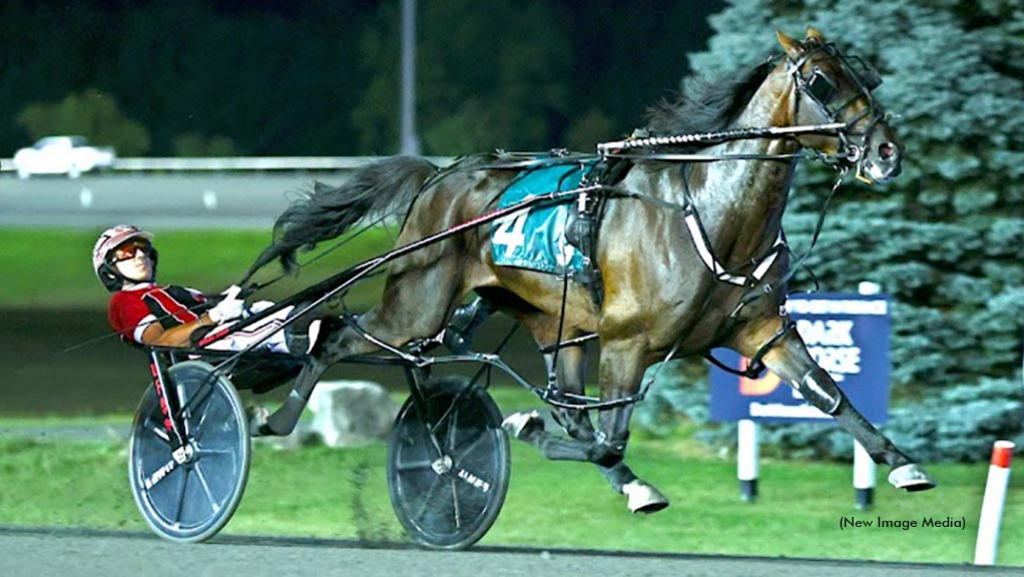 has a monster card coming up this Friday, and among the stars in action at the oval will be the sport’s fastest performer of all-time, Bulldog Hanover.

The Jack Darling-trained Bulldog Hanover will put his nine-race winning streak on the line as he’s scheduled to take on nine hard-hitting foes in the $200,000 Harrah’s Hoosier Park Pacing Derby.

The four-year-old son of Shadow Play-BJs Squall will start from Post 2 as he looks to improve on his 10-for-11 record this season.  A first- or second-place finish for the 24-time winner would make him a double millionaire.

The World Champion has been established as the 2-5 morning line favourite in the field of 10 set to go as the evening’s 13th race. It’s the first time Bulldog Hanover will return to Harrah’s Hoosier Park since his dominant 1:48:1 victory in the $325,000 Dan Patch Stakes on August 12. In the meantime, he’s continued his remarkable stretch of victories with back-to-back wins at Woodbine Mohawk Park, including a 1:46:4 Canadian Record-equaling effort in the Canadian Pacing Derby. The top-rated horse in all of harness racing has won 10 times in 2022, including his current historic nine-race win streak on his way to banking $1.027 million this year.

Cuatro De Julio will have the second choice on the morning line on his back from the start, as the champion mare Bella Bellini starts from the second tier in Post 10. The 2021 Dan Patch Award winner has picked up where she left off last season, winning six times in 13 starts in 2022, including victories in the Graduate Final for trotting mares, and in the $432,000 Hambletonian Maturity against male rivals. With earnings over $1.6 million in her career, the 2021 Hambletonian Oaks winner has been established at odds of 7-2 on the morning line for trainer Nifty Norman and regular pilot Dexter Dunn aboard.

The undercard features the likes of 2022 Hambletonian Champion Cool Papa Bell in the $90,000 Phil Langley Memorial where he’ll take on a field of five including the unbeaten Indiana Superstar, Ponda Adventure. Jim Campbell’s Hambletonian Oaks Champion, Fashion Schooner will take on an unbeaten Hoosier champion of her own with M Ms Dream in the $110,000 Moni Maker. Other stakes on the evening include the $100,000 Madison County, $240,000 Kentuckiana Stakes, $140,000 Jenna’s Beach Boy and $110,000 Elevation Stakes on the 15-race card.

Racing fans will have the opportunity to participate in three special wagers offered on the Caesars Trotting Classic card. A $20,000 Guaranteed Late Pick-4 will be offered in races 12-15, a $25,000 Guaranteed Superfecta on the Caesars Trotting Classic in race 14, as well as a $15,000 guaranteed Hoosier High Five in the race 15 finale. Each wager is available through the cooperative efforts of the United States Trotting Association, Harrah’s Hoosier Park Racing & Casino and the Indiana Standardbred Association.

In addition to the special wagers, guests can also enjoy the likes of $250 MegaBets on the Caesars Trotting Classic, a $1,000 Late Night Lucky cash drawing immediately following the Caesars Trotting Classic, as well as a $2,000 Late Pick 5 Win & Grin promotion. Guests are encouraged to visit a Trackside Promotional Kiosk to enter beginning at 5 p.m. Harrah’s Hoosier Park will also have food trucks, outdoor games and other entertainment to coincide with a terrific night of racing.

(with files from Hoosier)

Harness racing NEEDS a star like Bulldog Hanover. Wherever he races, he draws a crowd and he inflates the track's handle. SC and The USTA should do everything that they can to convince Bulldog's connections to race him in 2023. There's no reason why he can't both breed and race again next year - the stakes season doesn't start until late May and the breeding season is pretty much over with by then.