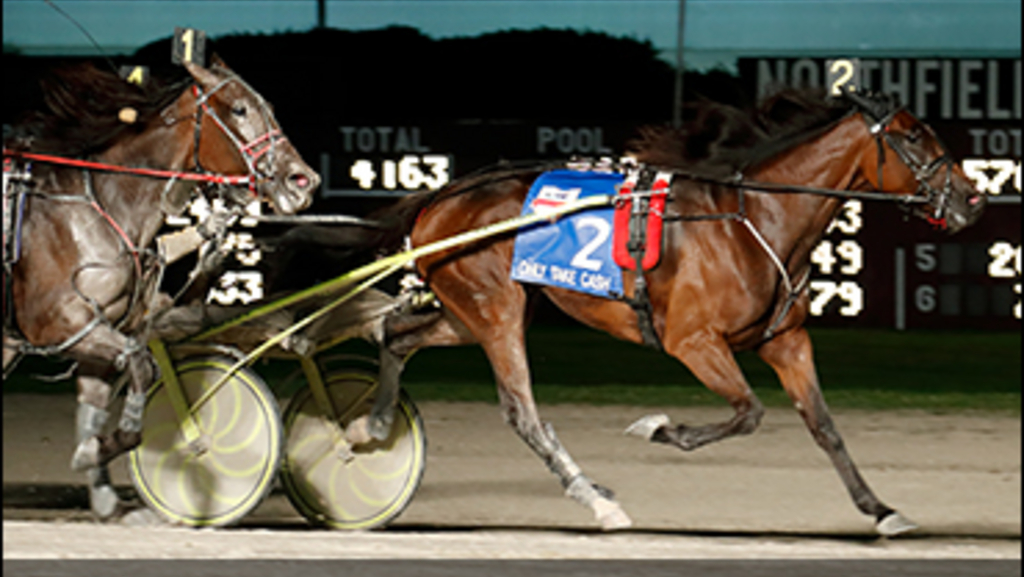 Only Take Cash's 1:54.1 victory in the $300,000 Ohio Sires Stakes final for three-year-old trotting fillies lifted McIntosh into the rare company of Ron Burke and Jimmy Takter, the only other two trainers to achieve the $100 million plateau.

Aaron Merriman was at the lines the daughter of Cash Hall, who was a front-stepping winner by three-quarters of a length over Weslynn Quest (Tyler Smith) and Aunt Rose (Ronnie Wrenn Jr.). Only Take Cash upped her career earnings to $570,561 with her 14th win in 17 starts for McIntosh, Dave Boyle and the Mardon Stables.

The final OSS event of the night, the three-year-old colt pace, saw 6-5 favourite Bllack Hole endure an excruciating first-over journey to triumph in 1:49.4.

Owned by the L&L Stables of Springfield, Ohio and trained by Clarence Foulk, the homebred son of Mr Apples was steered by Tyler Smith to his sixth straight victory this season in as many tries. Yankee Boots (Dan Noble) was second, three-quarters of a length behind the winner while Cross Country (Luke Ebersole) nabbed third place honours.

Trainer Ron Burke teamed up with driver Chris Page to capture two OSS finals, beginning with Looksgoodinaromper in the two-year-old filly pace. Owned by Burke Racing Stable and Weaver Bruscemi, Looksgoodinaromper used wire-to-wire tactics to score a 1:52.4 clocking as the 1-2 favourite. Beautiful Beach was second for Aaron Merriman, while Artful Dancer was third for Trace Tetrick.

The Pet Rock lass had established a new world record of 1:52.3 for two-year-old pacing fillies on a half-mile track via her victory in a $50,000 OSS at Northfield on Aug. 9. Bred by Robert and Barbara Bongiorno, Looksgoodinaromper is the first foal out of the Village Connection mare Dont Blame Her p, 10, 1:51.2s ($830,555). Her freshman earnings now stand at $241,300 from four wins, one second and a third in six starts.

Burke and Page returned to the winner’s circle a few races later with 3-5 favourite Elver Hanover, a son of Yankee Cruiser who stormed to a four-length 1:51.2 effort. Owned by Burke Racing, Briggit Jablonsky, Jason Mellilo, J&TSilva-Purnel&Libby, Elver Hanover got the best of 9-5 Ocean Rock (Dan Noble), who had led the field of eight until the head of the stretch. Mr Ds Rock (Aaron Merriman) was third. Elver Hanover is now six-for-six lifetime, with a career bankroll of $256,500.

Before Only Take Cash's victory, Merriman scored the first of his two OSS final victories by piloting 3-1 Kikimora to a 1:57 triumph for trainer Chris Beaver. The daughter of Triumphant Caviar posted her third win in seven tries for owner-breeder Sandra S. Burnett of Wilmington, Ohio, who owns the filly in partnership with her trainer. She now has $203,556 in career earnings. Even-money favourite Globetrotting was second for Anthony MacDonald, with Guinevere Hall (Peter Wrenn) third.

Action Uncle was a wire-to-wire winner for driver Brett Miller and trainer Virgil Morgan, Jr. in 1:55.1 in the two-year-old colt trot. The homebred Uncle Peter youngster is owned by Kenneth Sommer Trust of Sheffield, Ohio and notched his second career victory at 5-2. The winner finished just under two lengths in front of Big Box Hanover (Simon Allard), with Exhibit Class (Ronnie Wrenn, Jr.) third. Action Uncle now has $196,300 in earnings.

Driver Tony Hall brought the tough Queen Of The Pride into the Northfield Park winner’s circle for owner Frank E. Chick of Harrington, Del., in 1:51.3 in the three-year-old filly pace. The rangy McArdle filly, who left the gate at 2-1 odds, was bred by Brad Wallace and bested 6-5 Giggles In Dreams (Shawn Barker II), with Normans Madeline (Lewayne Miller) getting up for third. Queen Of The Pride pushed her bankroll to $660,479 with her 13th career win.

Finally, 4-5 Lane Of Stone and Jeff Nisonger captured the three-year-old colt trot for trainer Mark Winters Sr. and owner-breeder Harry Horowitz of Brooklyn, N.Y. The son of Wishing Stone was never headed throughout the one-mile test, stopping the clock in 1:54.1 as he recorded career victory number 15 and added the $150,000 winner’s share to his bank account of $281,213. Voyage To Paris was second for Dan Noble, with 35-1 long shot Yes was third for Anthony MacDonald.

Eight $75,000 OSS consolation races will be held Saturday, Sept. 7 at Scioto Downs, along with a pair of $150,000 Veteran Championships for older pacers.

(with files from the OSDF)

A remarkable accomplishment! The Windsor region is very proud of you and your stable!