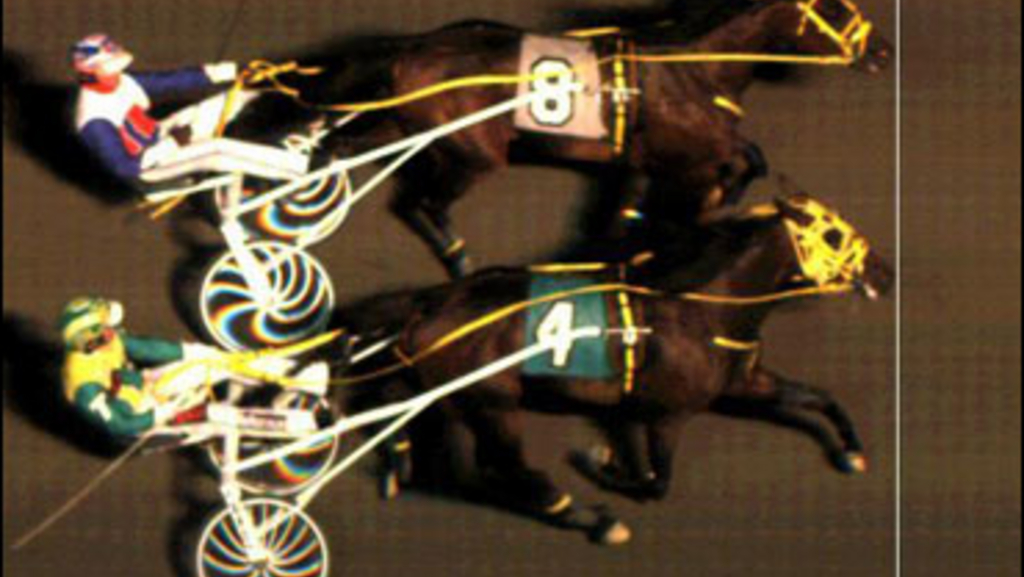 As Frau Blucher was trying to nurse her lead late in the Pennsylvania Sires Stakes Championship for three-year-old fillies Friday at The Meadows, her stablemate, Classic Martine, was steadily cutting into the margin.

The two hit the wire together in 1:53.2, the fastest trotting dead heat in North American harness history regardless of track size.

On an evening of exciting moments when The Meadows hosted four PASS Championships and Consolations for three-year-olds worth a combined $1.24 million, that was the most thrilling. As Chris Oakes, trainer of the dead heat winners put it: “I’m so happy for the owners. There are no losers.”

Last year’s PASS champion, Frau Blucher had to battle for the early lead from post seven, but appeared in command until Classic Martine, saving ground all the way for Tim Tetrick, popped off the cones for the drive. Both Tetrick and Pierce thought Classic Martine had shoved her nose in front.

Pierce agreed: “I enjoyed that, but I thought Tim had me by about four inches. My filly never had much of a breather, but she raced really game. I’m very proud of her.”

Fashion Athena was five and a quarter lengths back in third. The win erased the trotting dead heat mark of 1:54.1, held jointly by the duos of Bands Gold Chip and Bolivar, and Lavec Dream and Louisville, both taken at the Meadowlands.

Beach Memories punched his ticket to next week’s Little Brown Jug with a 10-1 Lightning Lane win in 1:51 for David Miller. Twilight Bonfire rallied for second, half a length back, with the first-over Twincreeks Jessie third.

Brian Brown, who conditions the Somebeachsomewhere-Allamerican Memoir gelding for Strollin Stable, AWS Stables, King McNamara and Country Club Acres, predicted that Beach Memories would find the half-mile strip at Delaware to his liking.

“He can get around a half,” Brown said. “He’s a big horse, but he can get around the turns no problem. He has some gate speed. But post position means everything there.”

Charisma Hanover scored a mild upset when she followed the first-up cover of Novascotia Hanover and Miller to defeat Somwherovrarainbow, last year’s PASS champ and Dan Patch awardee, by one and a quarter lengths in 1:51.2. Native Dream earned show. Charisma Hanover was able to score despite rather comfortable early fractions, :28.1 and :56, for Somwherovrarainbow and Montrell Teague.

“I was hoping someone would mix it up with Montrell, but he got soft numbers,” said winning driver Dave Palone. “This filly can really sprint, and David got me just far enough. When I flipped her off his cover, I thought she’d win. She just exploded. You couldn't find a nicer filly to give you a good effort every single time.”

Ron Burke trains Charisma Hanover, a daughter of Dragon Again-Caught The Bouquet, who soared over $400,000 in career earnings, for Burke Racing Stable and Weaver Bruscemi LLC.

High Bridge and Bluto, both trained by Jimmy Takter, were second and third, respectively.

Spider Blue Chip won a Hambletonian elimination and the $500,000 Colonial, but broke stride in the Zweig. Pierce, who was aboard for all those races, said he took special care to get the Andover Hall-Southwind Catlin gelding away cleanly.

“I was just kind of floating out there [in the Zweig] and he was giving me a hard time about getting into a hole,” Pierce said. “He got a little crooked. I was extra careful tonight to keep his mind on what he was doing so he didn’t pull that again.”