There were a number of Canadian connections to the major stakes wins on the 2018 Hambletonian Day card of harness racing at The Meadowlands Racetrack in East Rutherford, N.J. 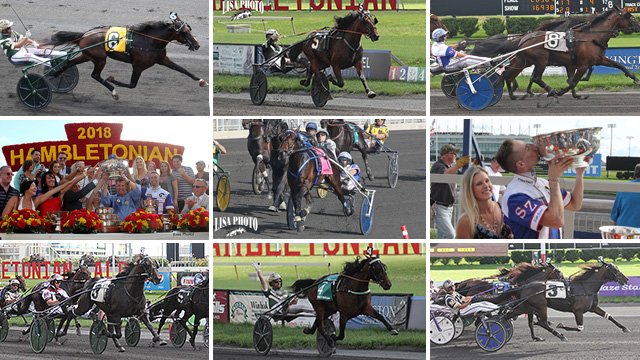 A total of 18,252 fans and patrons came out for the on-track Hambletonian experience, despite bad weather early in the day.

“I’d like to thank our fans, owners, drivers, trainers, grooms and employees for supporting what is not only our biggest day here at the Meadowlands, but harness racing’s biggest day,” said Jason Settlemoir, the track’s chief operating officer and general manager.

Here are all the recaps from Saturday's stakes action.

Canadian-based trotting filly Atlanta became just the 14th filly in the 93-year history of the Hambletonian to defeat the boys and capture harness racing's richest prize for three-year-olds....read on

It was a crash and bang affair filled with breaks – and a few heartbreaks – in the second elimination of the Hambletonian. Tactical Landing, however, dodged landmines and sailed to a 1:52.1 triumph for trainer/driver Jimmy Takter....read on

Yannick Gingras was called into work on his birthday, and he clearly made the most of it thanks in large part to his gate-to-wire score in the Hambletonian Oaks with Manchego....read on

After an O’Brien Award-winning season as a freshman thanks to a number of top tier efforts in big money performances, Stay Hungry seemed to struggle to find his way back to the top of the mountain in 2018. That all changed in the Cane Pace....read on

Marion Marauder Conquers All In Cashman

Once again showing a flair for the dramatic on Hambletonian Day, Triple Crown winner Marion Marauder captured the 2018 $286,650 John Cashman Memorial in a tight photo finish....read on

Doherty Memorial To The Ice Dutchess

After losing by a nose in last week’s elimination round, The Ice Dutchess manufactured a multiple-move victory when the big money was on the line for Team Takter....read on

A 'Dream' Win For McClure & Blais

Driver Bob McClure made a splash in his limited action on Hambletonian Day by blowing up the toteboard with 50-1 trotting mare Dream Together in the $154,800 Dr. John R. Steele Memorial for older trotting mares....read on

Perhaps now the early favourite for the main event one year from now, trotting colt Dont Letem was much the best in the 2018 Peter Haughton Memorial and added his name to the Meadowlands track record books in the process....read on

After a rare defeat in the Golden Girls at this distance on Meadowlands Pace night, Shartin N bounced back to reclaim her throne as the queen of the older pacing ranks with a sharp score in the $197,400 Lady Liberty to close out the stakes action on Hambletonian Day....read on

Things Get 'Western' In McKee Memorial

Western Joe starred in the Preferred ranks over the winter at The Meadowlands, but on Hambletonian Day the four-year-old found his way to the Big M winner's circle against the sport's best older pacers....read on

It only took two races for the first stakes and record of the day as Youaremycandygirl held off all challengers in the $96,600 Shady Daisy for three-year-old pacing fillies....read on

Tetrick had public choice Donttellmeagain in control early with a :26.4 opening panel before yielding to More Than Better (Corey Callahan), who moved from third to first down the backside and reeled off a swift :53.2 half and 1:21.1 third quarter. Tetrick waited patiently in the pocket until the straightening out in the stretch, right-lined his horse and powered past his rival for the length win.

Paton Racing Stables Inc. of Lambertville, N.J. owns Donttellmeagain (Dragon Again - Donttellmewhattodo), whose summary now stands at 3-2-0 from eight seasonal starts with a bankroll of $226,111 for the campaign.

A massive, 12-horse field went postward in the $50,000 Dennis Drazin for three-year-old colt and gelding trotters, and it was the horse from Post 12 striking a pose in victory lane.

Cruising In Style motored to the engine and whacked out the opening quarter in :27.4 before being pressed by Tae Kwon Deo through fractions of :55.1 and 1:22.3. Helpisontheway and Tim Tetrick catapulted off cover and kicked away from the others in deep stretch. He went on to stop the clock in 1:51.4. Tae Kwon Deo was second under the line, with Scirocco Rob taking home third prize.

Linda Toscano trains the son of Chapter Seven-Porque for Camelot Stable Inc, The Bays Stable LLC and Little E LLC. It was the fifth win of the season – and the sixth to date – for the trotter who went over $200,000 with the win.

All eyes – and plenty of betting dollars - were on Repentance in this event for three-year-old filly trotters, but Basquiat burst that foe’s bubble when she popped out of the pocket and powered away to win in 1:51.2 for Team Takter.

Basquiat cut the opening quarter in :27.2 before giving way to the public’s top choice, Repentance. The favourite zipped through middle splits of :55 and 1:23.4, but she couldn’t seal the deal. Basquiat angled out of the two-hole in the lane and stormed home to win in going away fashion over Courtney Hanover and Perfect Summer K.

Johnny Takter mapped out the pretty trip for the Jimmy Takter-trained daughter of Cantab Hall-Thatsnotmyname. It was her first win of the season in six attempts for the seven-time winner. Lifting her lifetime earnings to $289,748 for owner/breeder Order By Stable of Boras, Sweden.

If the stretch drive of the opening race was any indication of the action to come on Hambletonian Day, fans of harness racing are in for a treat.

Muscle Diamond ($6.00) attacked from second over, wore down a stubborn Obriagdo and withstood late bids from pylon skimmer Satin Dancer a hard-charging Lagerfeld (Johnny Takter) to take the first dash on the Hambo card in 1:51 over a tracked listed as 'sloppy'.