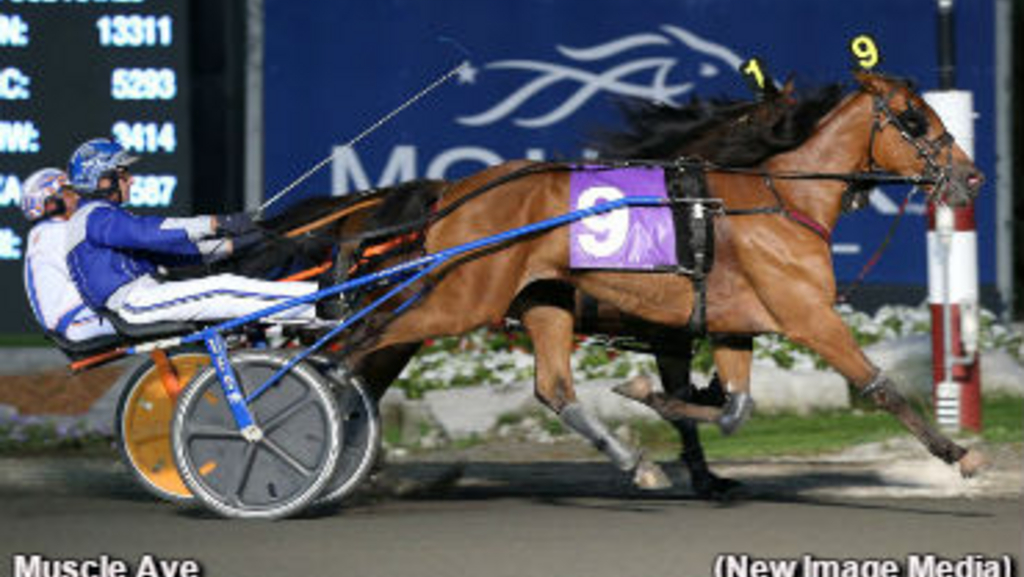 A four-pack of OSS Grassroots divisions went postward Tuesday evening at Mohawk Racetrack, with three-year-old trotting colts and geldings proving to be the stars of the show.

Golden Son kicked off the card with a 1:55.3 tally in his $18,000 assignment. Trevor Henry hustled the Richard Moreau trainee to the lead, and they never looked back through panels of :28.1, :58.4 and 1:27. Agent Dinozzo was a drifting out runner-up, with Innovative Force nabbing the show dough.

Sent off as the 1-2 favourite, the gelded son of Majestic Son-Dawn Dream improved his 2016 record to 8-1-3 from 14 starts while boosting his lifetime earnings to $51,400 in the process.

Muscle Ave pulled off an upset to the tune of 11-1 in the second division. Parked every step of the way from Post 9, the son of Muscle Mass-Third Avenue kept on digging before using a :28.4 kicker to win by a neck over Mass Balance in 1:56.1. Taking home the show dough was Mission Man.

Trainer Ben Wallace’s Wallacestandardbreds Inc of Puslinch owns the gelding with Larry Ainsworth of Petrolia, Ont. It was the second win of the year – and the fifth to date – for the career winner of $49,000.

Gonna Fly did just that en route to winning the third OSS Grassroots division in 1:57. Sent off as the 2-1 choice, the three-year-old son of Kadabra-Glidin On Home sat eighth and parked for the first three-quarters of the mile before being rallied to the win by driver Steve Condren. The son of Kadabra-Glidin On Home kicked home in :29 to win by a length over Dynamic Edge. Taking home the bronze medal was Zlatan.

Bred and owned by Robert McIntosh Stables Inc of Windsor and Earl Hill, Jr. of Ohsweken, Ont, the colt has banked more than $88,000 to date. He boasts a 4-2-0 record from 10 starts this season.

P L Jerico moved to the top shortly past the quarter pole, and once he cleared to the lead it was game over for the others. The son of Manofmanymissions-Corinas Mission cruised through middle panels of :57.1 and 1:26.2 before turning on the jets to win by 3-1/4 lengths over French Bastille. Third prize went to JLS Bad Moon Risin.

After going 0-for-6 as a rookie, the Matt Dupuis trainee has racked up an eye-catching record of 4-3-2 from 13 starts in addition to career earnings of close to $63,000.