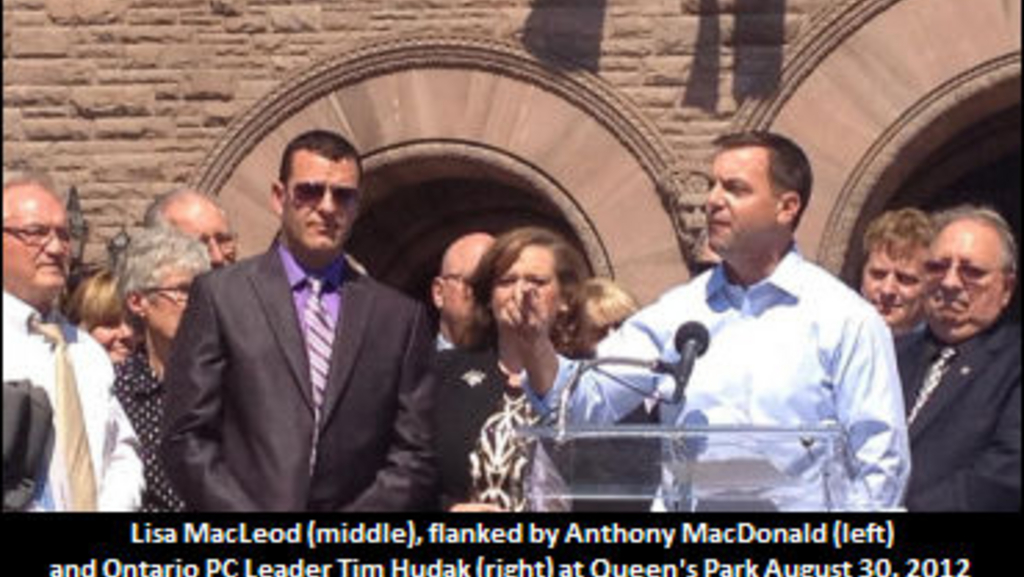 The Thursday, August 30 Queen's Park rally in support of Progressive Conservative MPP Lisa MacLeod's private members bill was the scene of something rare. The rally laid the groundwork for Ontario PC and NDP representatives in attendance to agree that they are on the same page against the Ontario Liberal Party's controversial decision to decimate the provincial horse-racing industry.

After converging on Queen's Park from all over Ontario, supporters of MacLeod's private members bill --- which calls on the Auditor General to review the Ontario Lottery and Gaming Corporation’s new gaming plans --- hundreds of supports flooded the front yard, where they heard multiple speeches by members of the PC Party. Leader Tim Hudak, flanked by MPP Monte McNaughton, horseman Anthony MacDonald and many others, addressed the crowd, one which has been waiting to hear him speak live on the subject.

Acknowledging the horse-racing supporters that have taken their time away as their livelihoods crumble around them, Hudak said, "I know the folks in this sector. I know you don't make a lot of money... You made a sacrifice to be here and I appreciate that." 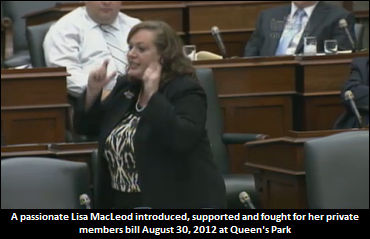 When it was time to move inside to the Legislature and introduce her private members bill (Ballot Item No. 50), MacLeod called on the Auditor General to review the OLG's gaming modernization plan, including its revenue and expenditure projections, it's impact on the horse-racing industry, and assess the risks in terms of mental health and addiction.

In her address, MacLeod, like Hudak, acknowledged the horse-racing supporters that had, at that point, made their way to the gallery for the proceedings. "There are people here today (horse-racing supporters) that never thought they would be here, and probably never wanted to be here," MacLeod said.

MacLeod also indicated that she wanted the Auditor General to assess what she characterized as historical and current oversight issues at the OLG.

"Our horse-racing industry cannot be outsourced or sent offshore," NDP MPP Taras Natyshak said. "This is an industry which has nothing but hard-working individuals with very special skills."

In regard to claims by the Liberal Government that its gaming modernization plan will be beneficial for the province and that getting rid of the SAR program is a good thing, Natyshak said, "The economic rationale, at least to me and this side, doesn't add up, we don't see it at all."

"We are talking about a program that generated billions to the treasury over the years," said PC MPP Ted Arnott, who went on to refer back to the 'economic impact study' which has been highly scrutinized since it was found that it came out days after the decision to scrap the SAR program was set.

"This government is going after the horse-racing industry because this government has run out of money," said NDP MPP Paul Miller. "They set their sites on a partner that they figured was an easy target." 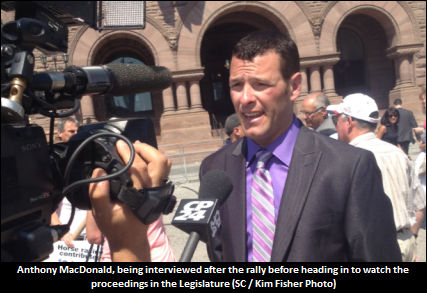 Miller went on to say, in terms of a value-for-money assessment, "Where else can this government sign an economic agreement in which they get 75-cents on the dollar and then do as much for this province as it does. You are going to hear about this in the next election, that's for sure."

"I say to this government: It's time to wake up," said PC MPP Jim McDonell. "You are killing off a guaranteed revenue producer that has been a terrific partner for more than 10 years. Just like most of this government's decisions, it just doesn't make any sense."

"I don't know how anyone in this legislative assembly wouldn't want to support this resolution," said PC MPP Steve Clark.

"Horse racing is a job producer in my riding," said NDP Nickel Belt MPP France Gelinas. "This is not an economic move by Ontario's current government, this is a political move."

"This has been a lively and important day for the Province of Ontario," MacLeod said in closing. "On behalf of thousands upon thousand of people in the horse-racing industry and the province of Ontario, I cannot stress enough that we must have all the facts and assess this attempted move with a transparent and informed process."

I attended the rally at

I attended the rally at Queens Park on Thursday Aug 30, 2012 and I just wanted to say Thank You for presenting your Private Members Bill that defends the racing world and Agriculture in Ontario.
I know from talking to many around the race tracks that the moral is very low right now and of course alot may not realize how your bill can possibly change the course that is currently underway. I however, do feel that this issue can be turned around and we will be able to return to the job we all love and
the animals that we love that make us tax payers in Ontario and NOT charity cases.
I sincerely hope I am right.
I read your petition and I particularly appreciated point # 2--- direct OLG to honour the contracts with racetracks and protect the horse racing and breeding industry by continuing the OLG slots-at-racetracks revenue-sharing program
I just wish that Windsor was seeing the benefit of this petition since they locked up the facilities Friday August 31, 2012.
I appreciate those that presented the petition on behalf of their constituents so to them : Mr. John Yakabuski: Mr. Paul Miller: Mr. Frank Klees: and Mr. Todd Smith: --- THANK YOU
It is unfortunate that it had to come to this but if there is wrong doing in the OLG, now is the time to find it out and maybe the province on the whole will realize that [email protected] is NOT causing problems but contributing significantly to the growth of Ontario. Health and Education were the intended recipients of the proceeds from the partnership, so we have to ask where has that revenue been used ?

Thank you for the support Ms.

Thank you for the support Ms. MacLeod. You saved a lot of people from payday loans. Horsemen are glad about your strong support. God bless.

Thank you Lisa MacLeod, for

Thank you Lisa MacLeod, for your passionate efforts to save horse racing in Ontario. Thank you to all of the members of the legislature who spoke in support of our industry at the rally yesterday. This government must not have realized the passion that we racehorse people have for what we do. It isn't just a job --- it's in our blood. We live and breath horses and racing. The Liberals may have misjudged that passion to survive. Thankfully, other members of the legislature such as yourself, realize the worthiness of this agricultural industry to all of Ontario.

It was a long day to travel

It was a long day to travel from Ottawa, but very worthwhile. Many thanks to Rideau for providing the bus. It was very gratifying to hear the PC and NDP MPPs in the legislature speak the very words we have been writing to them the past several months. Our message is getting through to MPPs from all parties. The Liberal MPPs were noticably absent during Lisa McLeod's motion and speeches. The three Liberals who did speak were not especially motivated to defend their party's position. The PC's put on a very good show and I believe left all in attendance feeling confident they will continue to fight for the industry. It is my belief that the SARP is NOT off the table despite what some groups are saying. The OMAFRA transition panel made it clear the industry will not survive without slots and it seems the opposition parties are willing to insist the program is the best solution.

I sent an e-mail to Lisa

I sent an e-mail to Lisa MacLeod today as follows:

On behalf of myself and the 60,000+ colleagues of mine who are associated with the horse racing industry and whose jobs are at stake, I want to thank you for the articulate and most passionate presentation in the Legislature at Queens Park yesterday. I commend and applaud you and your colleagues for your support of our industry and for your concern for the potential loss of jobs for the hard working horse people in Ontario. THANK YOU for representing us and please pass on our heart-felt thanks to the other members of the PC Party who are working so hard to rescind this ill-fated decision by the Liberals to end the SAR program. Our thanks also, to the members of the NDP who also supported this Bill.

Just getting home to Windsor

Just getting home to Windsor from a long but very worthwhile day in TO. Thankyou to all who made the trip from across the Province and to all of the MPP's who gave us hope to keep fighting today. On the bus trip back to London we were sent a message that Lisa MacLeod's bill HAS been passed this aft. Watching her in session in the House today we saw one passionate, tenacious lady fighting for us. We are so lucky to have her on our side. WINNERS DON'T QUIT

I will be hoping and praying

I will be hoping and praying that the liberal govt. Does not get a majority after the two bi elections.Should it be one NDP in Waterloo and one liberal in Vaughn .The split would still end up with a minority government and they would have to argue for their war chests to fill up till 31March 2013 .....If a new PC government is formed we should remember what his ministers Monte McNaughton and Ted Arnott have said about The slots at racetrack programme ..THEY AGREED THAT THE LOCAL GOVERNMENTS SHOULD HOLD A REFORENDUM ON WHERE GAMBLING SHOULD BE? Pay attention now: WHERE DOES IT SAY IN THEIR PRIVATE MEMBERS BILL THAT THEY ARE GOING TO REVERSE THE AGREEMENT WITH THE HORSE RACING INDUSTRY? Show me the way that you ever get something back that you lost in the spring budget....Ask Tim HUDAK what his plans are? .