The two favourites in Saturday's $12,500 ASHA Filly divisions at Century Downs had no intentions of disappointing their backers, or their connections.

Bearcat Josi had only one victory to her credit heading into the first ASHA Filly split, but that didn't stop the betting public from bestowing faith and pari-mutuel support. Driver Bill Tainsh drove Bearcat Josi like she was the favourite, with a methodical and confident first-over grind against second choice You Talk Too Much (Keith Clark). That filly paced through fractions of :29, :59.3 and 1:28 but couldn't hold off the outer flow challenger, up in time to trip the timer a length to the good in a lifetime best 1:56.4 for her first stakes win. Betterbegoodtome (Brandon Campbell) closed well to complete the triactor. 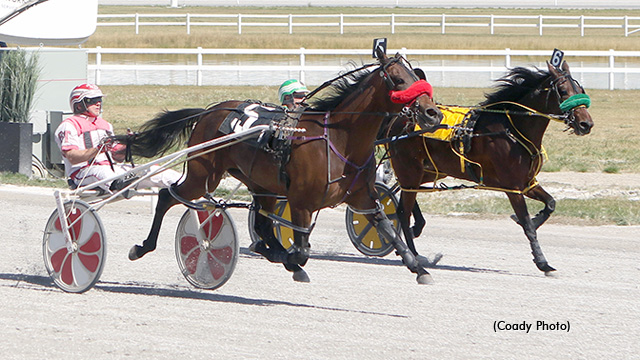 Maid In Alberta won her third straight in the second ASHA Filly division. Driver Serge Masse pointed his filly for the front, made three left turns through splits of :28.2, :59.2 and 1:28.4 before punctuating the mile with a :28.3 closer to hit the wire in 1:57.2. Ginger Beer (Keith Clark) gave chase late to finish less than a length back in second with Pez Dispenser (J.F. Gagne) charging hard to complete the triactor.

Trained by Harold Haining, Maid In Alberta (Vertical Horizon - Exquisite Alberta) is owned by Donald Richardson of Cochrane, Alta. The filly, who was a $16,000 yearling sale acquisition last fall, has won each of her starts with Masse in the sulky. Her summary now stands at 3-0-0 in five starts with nearly $33,000 in the bank.

For the results from Saturday's card at Century, click the following link: Saturday Results - Century Downs.