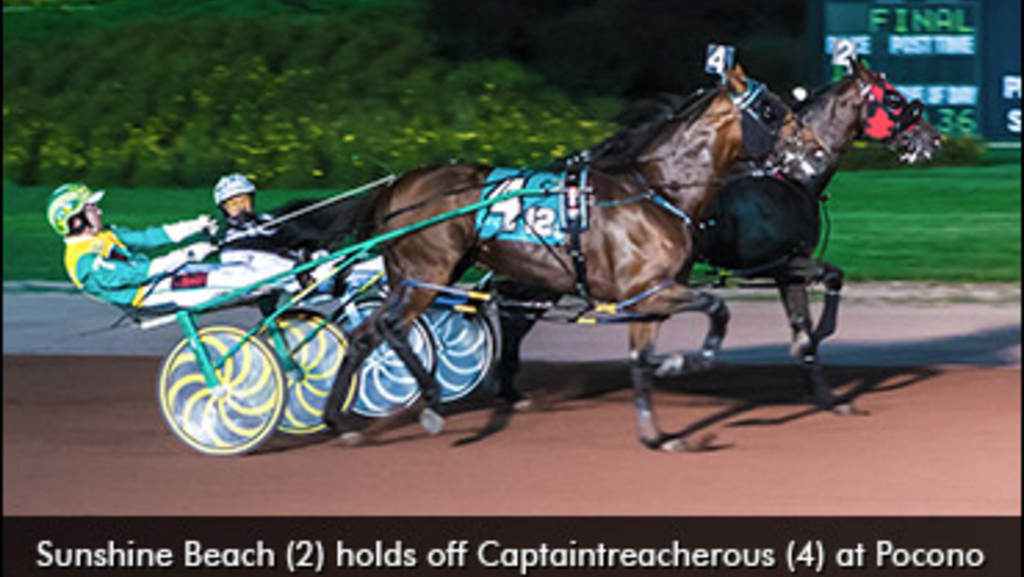 The action-packed 14-race card featured three major events for three-year-olds: the Battle of the Brandywine for pacing colts, the Colonial for trotting colts, and the Valley Forge for pacing fillies. The top money winners in each group competed in the $500,000 colt finals and $350,000 filly final while the next highest earners in each division faced off in a pair of rich consolations.

Trot Insider has provided coverage of all the action below.

Sunshine Beach and driver Brian Sears put an end to Captaintreacherous' undefeated sophomore season in the $500,000 Battle of the Brandywine as he held on to win the final stakes event of the night in a 1:47.4 world record-equalling mile.

Inside starters Lonewolf Currier (John Campbell), Sunshine Beach and Mach It So (Yannick Gingras) fired off the gate together and lined up in the top three spots during a :25.3 opening panel with 1-5 favourite Captaintreacherous (Tim Tetrick) tucking into fourth.

Sunshine Beach then swept to the lead as the field passed the grandstand for the first time with Captaintreacherous in pursuit. Sunshine Beach reached the half in :53.3 and was faced with heavy pressure from the favourite down the backstretch to three-quarters in 1:20.3.

The top two continued to battle down the stretch with Sunshine Beach hanging on by a nose in a photo finish to prevail over Captaintreacherous. Sent postward as the 5-1 second choice, Sunshine Beach paid $12.20 to win. Twilight Bonfire (David Miller) finished third.

"Coming into the race, Sunshine Beach has gone some good trips. He definitely has the ability," said Sears when asked about his chances of defeating Captaintreacherous. "He agreed with the track really well and I thought he was second-best at worst, and if we got our trip, maybe we could take a shot at him."

"I'm very excited," said trainer Mark Steacy. "To beat Captaintreacherous, he's probably one of the best ever, and when you beat someone like that you've got to be proud.

"I've always believed in this horse. I knew he had tons of talent. He's shown signs many time that he could go with that horse. I wasn't sure if he could beat him, but I felt pretty good when I saw him coming into the last turn and Brian hadn't popped the earplugs yet."

Steacy trains the Somebeachsomewhere colt for owners Hudson Standardbred Stable Inc. of Hudson, Que., Conrad Leber of Montreal, Que., and Diane Bertrand of Edmonton, Alta. Sunshine Beach has now won half of his 10 starts this year with his Brandywine earnings more than doubling his career bankroll, which now stands at $505,776.

His next assignment is the Simcoe Stakes at Mohawk Racetrack in three weeks with the Little Brown Jug potentially on the radar.

Spider Blue Chip established a new world record for three-year-old trotting geldings in the $500,000 Colonial with a 1:52.2 pylon-skimming score. The son of Andover Hall was two-fifths of a second faster than former record holders Im The Answer and Its Complicated.

Ron Pierce worked out a perfect pocket trip for Spider Blue Chip as they followed Smilin Eli (Tim Tetrick) through fractions of :26.3, :54.1 and 1:23.1 with favoured Hambletonian champion Royalty For life (Brian Sears) applying first over pressure. But when the trotters turned for home, Spider Blue Chip slipped up the passing lane to prevail by half a length over the tempo-setter while Corky (David Miller) rallied home off cover to show.

"We knew were in tough," said trainer Chuck Sylvester, who also won the 2010 Colonial with Lucky Chucky. "But I figured if we could get some luck and the other two would battle it out, we'd have a shot and that's just what happened."

Sylvester trains Spider Blue Chip for owners Melvin Hartman of Ottawa, Ont. and Florida's David McDuffee. The win was his sixth in 10 seasonal starts and nearly doubled his sophomore earnings. Lifetime, he has banked over $600,000.

Spider Blue Chip is expected to race in the Zweig Memorial Trot next Sunday, Aug. 25 at Vernon Downs.

O'Brien Award winner I Luv The Nitelife continued to dominate the three-year-old pacing filly division with a dazzling 1:48.4 world record performance in the $350,000 Valley Forge. The Rocknroll Hanover filly shaved one-fifth of a second off the record held by Economy Terror and Shebestingin, who broke stride early this time out.

Driver Tim Tetrick sent the heavy 1-2 favourite to the lead after watching Somwherovrarainbow (Montrell Teague) and Charisma Hanover (Yannick Gingras) battle on top through a :25.2 opening panel. Sweeping up from third, I Luv The Nitelife reached the half in :53.2 and three-quarters in 1:21 en route to the two length victory. Somwhereovrarainbow finished second while Nova Scotia Hanover (Brian Sears) advanced first over to show.

"We're just so proud of her," commented trainer Chris Ryder after the win.

I Luv The Nitelife is now nine-for-10 this year with seasonal earnings climbing to $753,816 and lifetime earnings soaring over $1.4 million for Florida owners Richard and Joanne Young.

"She's got everything except Kentucky," said Ryder of her racing schedule for the remainder of the year. "We're pretty sure she's racing at four. Put On A Show was out with an injury at four, but this mare, touch wood, is staying sound right now and if she's able to race she'll be racing."

Hurrikane Kingcole (Ron Pierce) fired off brisk opening panels of :25.4 and :53.1 before 6-5 favourite Pet Rock (David Miller) advanced first over from fourth with the Tim Tetrick-driven A Rocknroll Dance following his cover. Pet Rock applied heavy pressure to the early speedster past the 1:20.3 third quarter mark and took over command down the stretch, but A Rocknroll Dance surged by on the outside to prevail by three-quarters of a length. Pet Rock stayed for second while Sweet Lou (Yannick Gingras) came on for third.

Johny Rock waited patiently in the pocket before zipping up the passing lane to capture the $200,000 Battle of the Brandywine Consolation I in a lifetime-best clocking of 1:48.3 under the guidance of Andy Miller. First over challenger Sweet Talkin Satin (Tim Tetrick) finished two lengths back in second while the popular pacesetter Rockin Amadeus (Yannick Gingras) settled for third. The Rocknroll Hanover colt, owned by William Wiswell, Jean Goehlen, and Eugene Schick, provided trainer John Butenschoen with his second Super Stakes Saturday victory.

Diamond Creek Racing's Creatine also delivered on his 1-2 pari-mutuel promise with a 1:52.2 romp in the $200,000 Colonial Trot Consolation I for driver Mike Lachance and trainer Bob Stewart. Possessed Fashion (Brian Sears) advanced into second while All Laid Out (Andrew McCarthy) came on for third. The winning time matched the Andover Hall colt's lifetime mark.

Sent postward as the 6-5 favourite, Nikki Beach cruised wire-to-wire in a lifetime-best 1:50 flat to take the $150,000 Valley Forge Consolation I in rein to Ron Pierce for trainer Tony Alagna and Kentucky's Brittany Farms. The Somebeachsomewhere filly was followed under the wire by pocket-sitter Live Entertainment (Yannick Gingras) while Carols Desire (Matt Kakaley) edged out first over Handsoffmycupcake (Tim Tetrick) in a photo for show.

Wishing Stone smashed a long-standing world record with his 1:51.2 front end victory in the $50,000 Invitational Trot, giving trainer Ron Burke back-to-back record wins on the card. The six-year-old son of Conway Hall shaved one-fifth of a second off the aged trotting stallion mark set by Varenne in Finland in 2002.

Ultimate Beachboy matched the world record for three-year-old geldings on the pace with his 1:48.3 triumph in the $100,000 Battle of the Brandywine Consolation II for trainer Ron Burke. The son of Somebeachsomewhere joined Alsace Hanover, Beach Memories and Vegas Vacation in the record books.

Dave Palone sent the 2-5 favourite to the top from fourth past the :26-second opening panel and fought off Rocnrolwilneverdie (Brian Sears) through middle splits of :53.4 and 1:20.4 en route to the four length victory. The winner was a recent acquisition for the Pennsylvania-based Burke Racing Stable LLC, Weaver Bruscemi LLC, M1 Stable LLC, and Jack Piatt. Net Ten Eom (George Napolitano Jr.) and Normandy Invasion (David Miller) finished second and third.

Making amends for a few early season miscues, Punxsutawney wore down the popular O'Brien Award winner Wheeling N Dealin (Yannick Gingras) at the third quarter mark and drew off to win the $100,000 Colonial Trot Consolation II by four lengths in 1:53.2. The Glidemaster colt, who is trained by John Butenschoen for Illinois' Jerry Graham, carried Corey Callahan back to the winner's circle after his career-best performance. Sailer Eddie (Ron Pierce) and Boffin (Charlie Norris) finished second and third while Wheeling N Dealin came in fourth.

Heavy 1-9 favourite UF Dragons Queen swept from fourth to first as the three-year-old pacing fillies moved in front of the grandstand for the first time in the $75,000 Valley Forge Consolation II and cruised home a winner in 1:50.3 to equal her mark. David Miller drove the Dragon Again filly for trainer Kelly O'Donnell and Ohio's Up Front Racing LLC. Ideal Ginny (Andy Miller) finished one length behind in second and Mistresstothestars (Matt Kakaley) was third.

Millionaire Drop The Ball and driver Corey Callahan opened Super Stakes Saturday with a 1:48.2 world record performance in the $50,000 Mares Invitational Pace. Camille (Matt Kakaley), who shared the former world record for pacing mares on a five-eighth mile track of 1:48.3 with Southwind Tempo, finished one and a half lengths behind in second while Fashion Mystery (Eric Carlson) rounded out the top three finishers.

After being parked through opening panels of :26.2 and :54.1, the 1-5 favourite cleared to command and cruised past three-quarters in 1:21.2 en route to her 20th career win and new lifetime mark. The five-year-old Western Terror mare is trained by Ross Croghan for Florida owners Let It Ride Stables Inc., Dana Parham and Robert Cooper Stables LLC.