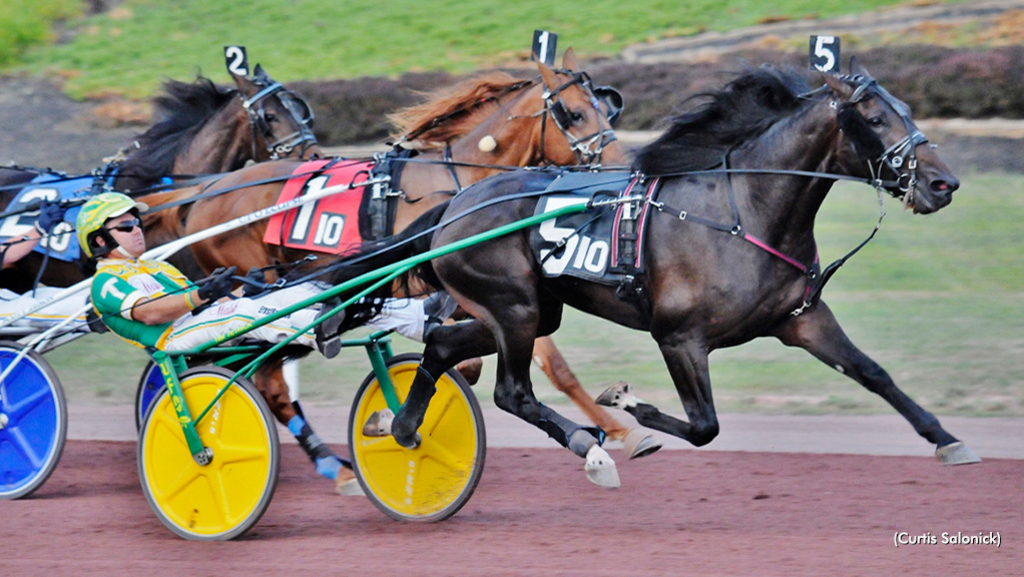 At a track where he set world records for two-year-old and three-year-old trotting colts that still stand nine and eight years later, it seems appropriate that sons of Father Patrick would win four stakes events where driver Tim Tetrick guided both $75,061 Pennsylvania Sire Stakes (PASS) winners, both sons of by Father Patrick, on Sunday night (Aug. 14) at The Downs at Mohegan Sun Pocono.

In the one PASS section, the team behind Oaks winner Fashion Schooner, Tetrick and trainer Jim Campbell, reunited behind Once In A Lifetime, a colt out of Sherrys Lady who took a new mark of 1:55.4. Crantini, the favourite after opening his career with three wins including two PASS, moved to the lead past a :28.4 quarter and put up middle splits of :58.1 and 1:27.2. Once In A Lifetime began a raw move in the middle of the backstretch, really turned up the heat on the far turn and then was able to win by 1-1/4 lengths over Crantini. The Sad Frog Stable should be much happier after the win of Once In A Lifetime, who in prior PASS races had made a break and was second behind Crantini, beaten only three parts of a length.

The other PASS division also went in 1:55.4 and also yielded a new mark. Southwind Distilld, who like Once In A Lifetime had a break and a second to Crantini in previous PASS action, was in control of his mile by setting fractions of :28.3, :58.4 and 1:27.2, then powered off to a 4-1/4-length win over Spitfire Overseas. Per Engblom conditions the talented baby for owner Mark Dumain.

Father Patrick, Tetrick, and Engblom also combined in one of the four $20,000 Stallion Series sections, with the colt Alonso (dam Prettiestgalaround) adding a second win in the Stallion Series prelims in 1:58 for the ownership of Engblom Stables LLC, Wiesman Farms LLC, and R A W Equine Inc. The fourth Father Patrick winner was the gelding Lookintogetlucky, who broke his maiden in 1:58.3 for driver Corey Callahan, trainer John Butenschoen, and owners Andray Farm and James Crawford IV.

The other two Stallion Series events were won “Thestable” horses driven by Anthony MacDonald and trained by Tim Twaddle; they tied at 1:57 for the fastest Stallion Series winner. The Bar Hopping-Twin B Alibi gelding Tailgate Buzz now is the only freshman trotting male to have three wins in the state stakes series with his victory for Thestable Tailgate Buzz. His barnmate Austral Hanover is undefeated in two Stallion Series starts, trying the Sire Stakes “in between” those wins; he’s an International Moni-Aspidistra Hanover gelding owned by Thestable Austral Hanover.

Pocono concludes its racing week with 1:30 p.m. (EDT) cards on Monday (Aug. 15) and Tuesday (Aug. 16). Monday will also be the day of drawing the races for the biggest card of the year at Pocono, the $2-million Sun Stakes Saturday at the end of this week (the 20th), with major events for all classes of three-year-olds and an Invitational on each gait. There will be a feature story previewing these top events late tomorrow afternoon.