Moore Hopes For Another Great Ending In Meadowlands Pace 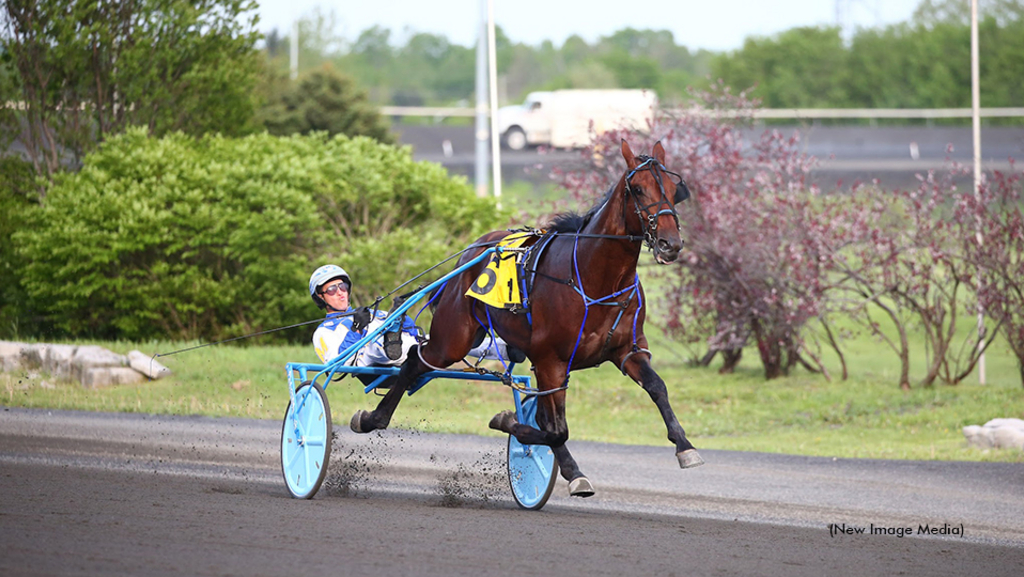 Ian Moore picked up his first Meadowlands Pace trophy last year with Lawless Shadow and will try for a second this year with Greatest Ending. The colt heads to his Pace elimination on Saturday (July 9) at The Meadowlands undefeated in three races this season and has never finished worse than second in eight lifetime starts.

Greatest Ending, who will have Mark MacDonald in the sulky, will start from post eight in the first of Saturday’s two $50,000 Meadowlands Pace eliminations. MacDonald also was the driver of Lawless Shadow, who was second-placed-first in last year’s final after Charlie May was disqualified.

The top five finishers from each elimination advance to the Meadowlands Pace final on July 16 at The Big M. Greatest Ending is 9-2 on the morning line, the third choice behind 5-2 Beach Glass, who was second in last month’s North America Cup, and 7-2 I Did It Myway.

Greatest Ending will be making his Grand Circuit debut in the Meadowlands Pace. He won a Pennsylvania Sire Stakes division in May at The Meadows, where he defeated a field that included Pace entrants Night Hawk, Mad Max Hanover, Fourever Boy and Market Based. Mad Max Hanover is the only horse from that race in Greatest Ending’s elim. The remaining three are in the second group.

Moore hoped to send Greatest Ending to the Somebeachsomewhere Stakes and North America Cup, but he was briefly sidelined and missed both events. He returned to win a qualifier on June 21 and won a conditioned race on June 25 at Woodbine Mohawk Park in his most recent start.

“He’s had a lot of bad-luck issues,” said Moore, who trains the homebred Greatest Ending, a son of Somebeachsomewhere-Lady Be Great, for owner Reginald Petitpas. “He started off [the year] real well and then kind of went to heck in a hurry. I think everything is on all cylinders now.

“I’m looking forward to Saturday night. He perhaps hasn’t raced that caliber of horse yet, a few of them in Pennsylvania, but I think he’ll handle it. We’ll keep our fingers crossed and see what happens.”

Last year, Greatest Ending made his first start at the end of August after having surgeries to remove chips from each hock and an ankle. He posted a win and four seconds in five races.

“He was a big, growthy colt,” Moore said. “We just raced him a few times for experience, and I was very pleased.

“He’s got a big, long, looping gait to him. It’s very deceiving how fast he’s going. Since he started racing now, even though it’s only been three times, he’s picked up the bit a lot more than he did as a two-year-old. He’s figured out what he’s there for. He’s got a great attitude and he’s a very tough horse.”

The morning-line favourite in the second elimination is Brian Brown-trained Night Hawk, at 2-1. Night Hawk, a four-time winner on the Pennsylvania stakes circuit during his career, finished second in his North America Cup elimination and fifth in the final, his only off-the-board finish in eight lifetime starts. David Miller will drive the colt from post five.

Captainryanmichael, making his first Grand Circuit start of this season after posting two Grand Circuit wins at age two, is the 3-1 second choice. He will be the first Meadowlands Pace horse for Joe Pavia Jr. as a trainer. As a driver, Pavia was second in a 1991 elimination with Easy Goer and fourth in the final. He also drove in one other elim, in 1993.

For his career, Captainryanmichael has won five of 14 races and earned $107,632 for owners Jablonsky Held Stable, Thomas Maloney and Pavia. He ended last season with a fifth-place finish in the Kindergarten Classic Series final and was brought back slowly this year to recover from a bone bruise.

After two winless starts to begin his three-year-old campaign, he posted back-to-back triumphs in conditioned races. Last week, he was fifth in a conditioned event for three-year-olds that was won by I Did It Myway in 1:48.1.

Brian Sears will be in the sulky Saturday for Captainryanmichael, who will start his elimination from post one. The elimination on Wednesday saw Hammering Hank, last year’s Kindergarten champion and the top-ranked horse in Meadowlands analyst Dave Little’s “Road to the Meadowlands Pace,” scratched because of an injury.

“[Captainryanmichael] only has five starts this year, so we’re hoping he’ll get a little better,” Pavia said. “He’s got some talent. He hasn’t come back this year quite as sharp as I hoped he would. He’s not bad, but I’ve been waiting for him to sharpen up a bit.

“Last week I thought he trained on his game a little bit more and he raced OK. Where he got away from, he was kind of in a tough spot. He got the rail this week so maybe he can get away a little closer and maybe we can get lucky.”

The son of Captaintreacherous-Pucker Up is named after his sire and one of co-owner Steven Held’s grandchildren, Ryan Michael.

“He’s a really good-looking, rugged horse; strong,” Pavia said. “We were on the fence whether to go in [to the Meadowlands Pace] or not. The owners wanted to take a shot. We’ll take our shot and do the best we can. He’s got the talent.”

Racing begins at 6:20 p.m. (EDT) Saturday at the Meadowlands. The card also includes Graduate finals for four-year-old pacers and trotters. TrackMaster past performances for all Meadowlands cards can be found at the track’s website.