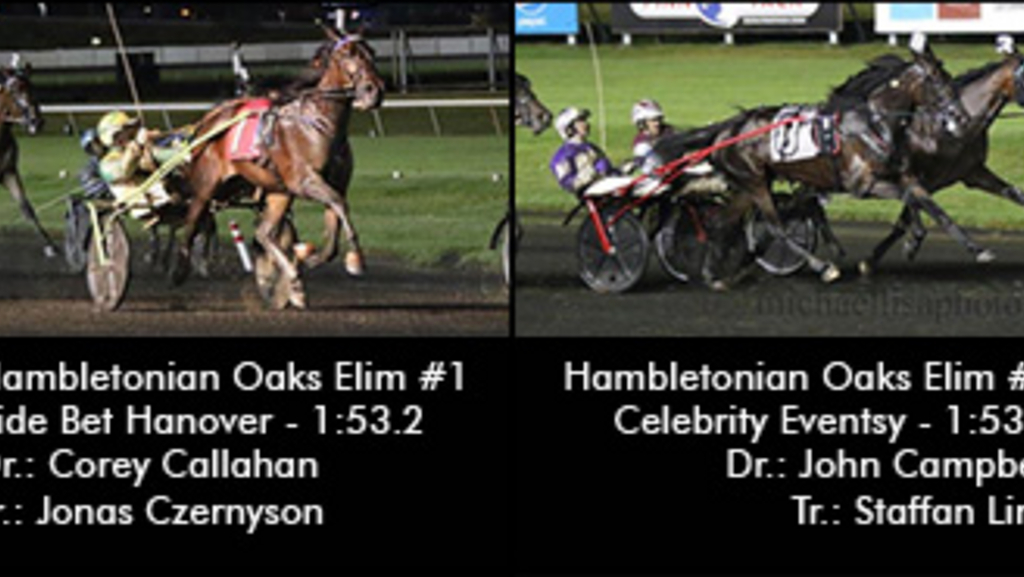 Side Bet Hanover and Celebrity Eventsy each defeated the favourites in the final strides to win a pair of $50,000 eliminations for the Hambletonian Oaks on an action-packed Saturday evening (July 30) at Meadowlands Racetrack.

In the first elimination, Side Bet Hanover and driver Corey Callahan defeated the front-striding 1-2 favourite Caprice Hill (Tim Tetrick) at the wire in a career-best clocking of 1:53.2 over the sloppy track for trainer Jonas Czernyson while Dream Child (John Campbell) rallied off cover to finish third. Black Broadway (Brett Miller) was fourth and Windowshopper (Ake Svanstedt) finished fifth, both also advancing to the final.

Side Bet Hanover left from the inside post with Unica Steed (Yannick Gingras) working past her into the 27-second opener before Canadian divisional champion Caprice Hill cleared. As Caprice Hill led the way past the half in :55.3 and three-quarters in 1:25, Womans Will (Andy Miller) advanced first over from fifth with Dream Child following her cover. Turning for home, the field fanned out across the track in pursuit of Caprice Hill, and Side Bet Hanover was able to steal her thunder off a ground-saving trip for the Srf Stable.

The Donato Hanover-Sea Level Hanover filly will head to the Oaks off of three (consecutive) victories from five seasonal starts.

"She's kind of had a slow start to the year," said Czernyson of the filly, who paid $78.20 to win. "We've been working hard on her and it looks like we've got her peaking at the right time."

Celebrity Eventsy and John Campbell came back on to win the second elimination in a new lifetime mark of 1:53.1 after leading early in the mile and closing along the pylons over 8-5 Broadway Donna (David Miller) and 3-2 All The Time (Yannick Gingras). Broadway Donna, however, was placed third for a lapped on break at the wire, moving All The Time to the runner-up position. Double Exposure (Tim Tetrick) and Wildflower (Ake Svanstedt) earned the remaining spots in the Oaks final as they finished fourth and fifth, respectively.

Leaving from post two, Celebrity Eventsy crossed in front of insider Wildflower off the gate through a :27.4 first quarter before Broadway Donna swept to the top from fourth down the backstretch and led the field to the half in :56.2. Broadway Donna continued to lead to three-quarters in 1:25.1 with All The Time moving up from fifth and Double Exposure following her cover. However, Celebrity Eventsy came through inside of eventual breaker Broadway Donna approaching the wire and All The Time closed outside in the three-across finish.

Celebrity Eventsy, who has won half of her six sophomore starts, paid $12.60 to win as the 5-1 third wagering choice. With the victory, her career earnings soared over the $300,000 mark.

"She's been a nice filly all along and we've tried to aim for this moment and this time it worked out," said Staffan Lind, who trains the Manofmanymissions-Little Ms Queenie filly for Celebrity Farms. "She's been training great lately so I was hoping for the best."

The top five finishers advance to the final on Hambletonian Day, with the elimination winners drawing for posts one through five. The post positions for the Hambletonian Oaks, Hambletonian eliminations, U.S. Pacing Championship, John Cashman Memorial, and the Cane Pace will be drawn at a press conference on Monday, August 1, beginning at 4 p.m. at Victory Sports Bar.

In his final Hambletonian prep at The Meadowlands, Southwind Frank overcame a trailing tier start with a strong backstretch brush in sloppy conditions to take the lead and then trotted home to a 1:52.1 career-best equalling victory in the $53,488 W.N. Reynolds Memorial Stakes.

Away seventh off the gate in the field of 11, reigning divisional champion Southwind Frank powered to the lead after a :27.4 first quarter for driver Yannick Gingras and reached the half in :56 and then three-quarters 1:24.4 en route to the 1:52.1 triumph. After a brief appearance on the lead, 3-1 second choice Cufflink Hanover (David Miller) launched late out of the pocket in the stretch and finished less than a length behind the winner with early leaver Desert Runner (John Campbell) following in third.

Ron Burke trains the millionaire son of Muscle Hill out of Flawless Lindy, who boasts a near-perfect sophomore record (five-for-six) with prior wins this year in the finals of the New Jersey Sire Stakes and Earl Beal Jr. Memorial, and Stanley Dancer Memorial.

Earlier in the night, Dontcallmefrancis and the red-hot Gingras yielded for a pocket trip behind 1-5 favourite Boston Red Rocks and then found room to squeeze through inside of that rival down the stretch to prevail in the $150,000 Anthony Abbatiello New Jersey Classic for three-year-old pacing colts

Firing from the outside post in the short field of five, the Ron Burke-trained Dontcallmefrancis and Gingras were forced wide to avoid All The Cookies (Brett Miller) when that foe broke stride leaving to his inside. Dontcallmefrancis did manage to cross to command over insider Boston Red Rocks (Tim Tetrick) before the heavy favourite looped to the lead as they raced by the first quarter mark in :27.3. Boston Red Rocks carved out middle splits of :56 and 1:24 with Ideal Rocky (Corey Callahan) advancing first over, but Dontcallmefrancis pulled off the upset with his deep-stretch, pylon-skimming move to defeat those foes in a three-across finish.

The Rocknroll Hanover-Nanny Withafanny gelding took a new lifetime mark of 1:51 flat with his fourth win of the season from 14 starts for his Pennsylvania owners Burke Racing Stable LLC, Weaver Bruscemi LLC and Phillip Collura.

Boston Red Rocks held on for second over Ideal Rocky.

Prior to the regular card, Blue Moon Stride was an easy winner in the $85,000 Thomas D'Altrui Miss New Jersey for three-year-old pacing fillies, which was contested as a non-wagering race.

Driven by Andrew McCarthy, New Jersey Sire Stakes and Mistletoe Shalee champion Blue Moon Stride assumed command of the four-filly field from the inside post off the gate into a :26.3 first quarter over the sloppy track. After a second panel breather to the half in :56.2, the Mark Harder trainee began to draw away to three-quarters in 1:24.1 and was home free down the stretch, scoring in a final time of 1:51.2. JK Fannie (David Miller) and her stablemate Rocknroll Vision (Yannick Gingras) finished second and third for trainer Nancy Johansson over six lengths behind the winner while Place To Rocknroll (Tim Tetrick) completed the field.