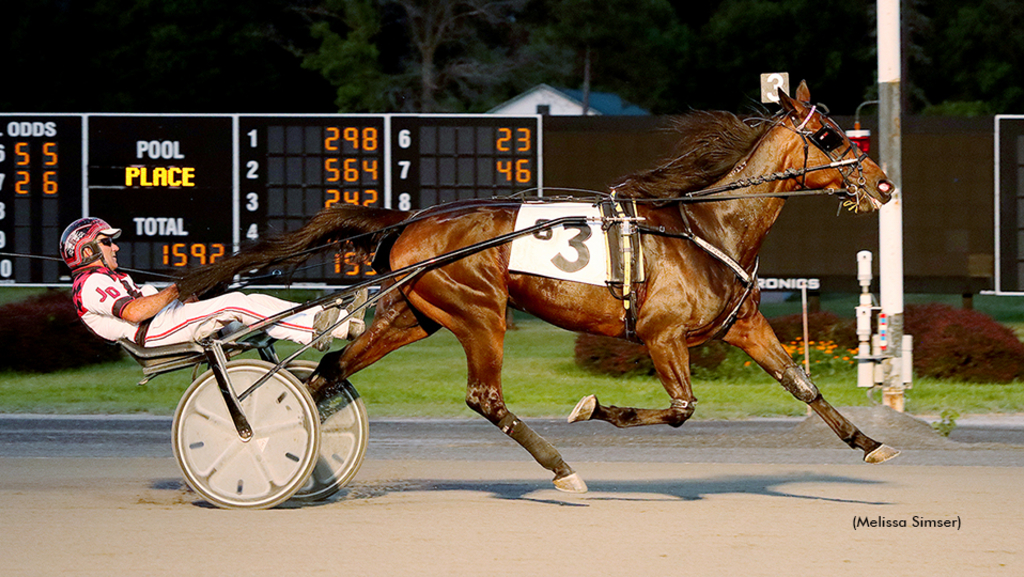 On Friday night (July 22), ER Sophia found herself in the Open Trot at Saratoga Casino Hotel for the just the second time in her career.

The John Mongeon trainee finished fourth in her lone try in the trotting feature and headed back into the $16,000 Open on Friday evening following a close second-place finish in last week’s installment of the Winners Over for trotters.

Leading driver Jimmy Devaux found some early speed from the six-year-old Swan For All mare, who was facing a bit softer of a group than usual in the Friday Open. ER Sophia enjoyed a hassle-free first lap and coasted to the half in :59.2 before cruising out to win by open lengths in 1:56.4.

Released at odds of 9-2, ER Sophia recorded her sixth victory of the season out of 24 starts but her first victory in an Open.

The race’s longshot, Deswanslittlelorie (Leon Bailey), got the pocket ride behind the winner and ended up as the runner-up while dismissed at odds of 55-1. Theresademoninme (Shawn Gray) earned the show spot.

ER Sophia, who was a 10-time winner in 2021, is owned by Brenda Messenger of Monticello, New York in partnership with Scott Woogen of North Chesterfield, Virginia.

Live racing continues on Saturday evening with a star-studded 15-race program highlighted by the 13th annual Joe Gerrity Jr. Memorial Pace. The $250,000 race is the richest of the season at the Spa and will be featured on a night where New York Sire Stakes action for two-year-old pacing colts and geldings will also take place. First post time is set for 6:45 p.m.