Driver Kenny Arsenault celebrated a career milestone early Saturday evening (July 22) with a victory aboard his own two-year-old trainee Private Di in the third race.

The Charlottetown reinsman earned his 3,000th career win in the sulky after steering Private Di wire-to-wire in the $1,100 maiden pace.

The Mach Three-Private Joke filly led the field through fractions of :31.1, 1:02.4 and 1:33.2 en route to the three and a quarter length victory in 2:01.3 over slight favourite Silverhill Misty and Jason Hughes. Evening Maelstrom and Ken Murphy finished six lengths back in third.

Owned and bred by Wade Peconi of Stanchel, P.E.I., Private Di broke her maiden in her second career start. 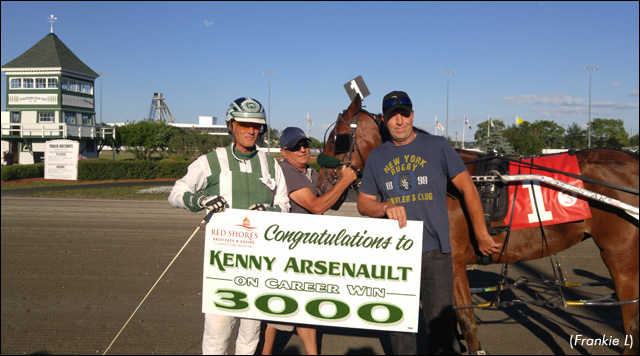 Arsenault started his quest for the next milestone, as he won back-to-back races later on the card with Pownal Bay Saul for trainer Tom Weatherbie and Artners In Crime for the Jackie Matheson stable.

Arsenault, who is among the top 10 drivers at both Charlottetown and Summerside racetracks, boasts 799 training victories in his career in addition to his 3,002 driving wins.

In regular Saturday night action, Wade Myers' Julep Hanover earned her first win of the year in the $2,250 Mares Open as the longest shot on the board at 10-1. The eight-year-old Western Ideal mare emerged from the pocket and defeated pacesetter Best Risque (Ken Murphy) by a head in 1:57.3. Brodys Leona (Mike McGuigan) finished one and a half lengths behind in third.