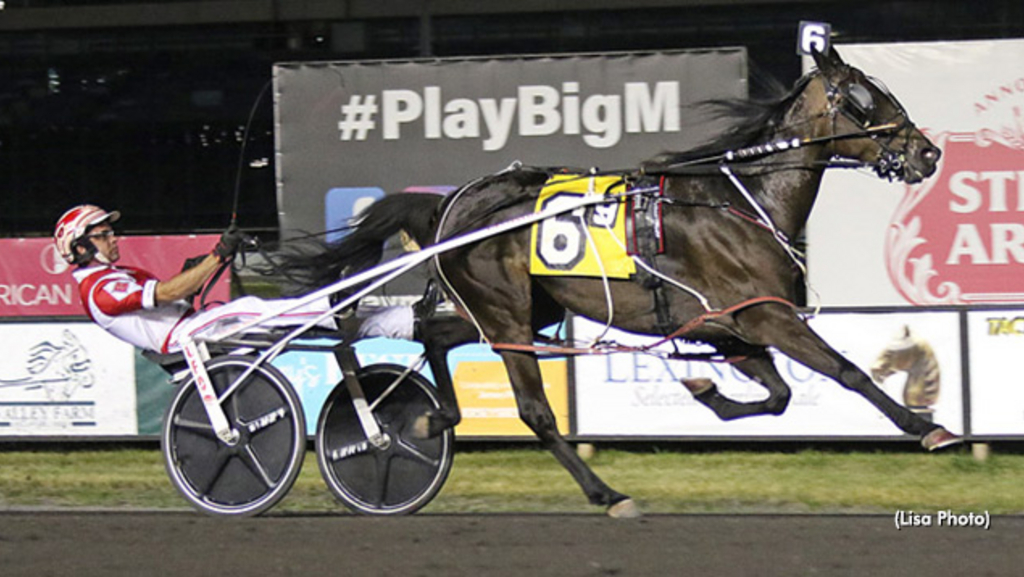 Racine Bell and her driver Jason Bartlett took command of the 10-horse field in the $143,000 Perfect Sting and paced best to win the event in a personal- and stakes-record 1:47.2 at The Meadowlands on Saturday (July 2).

Test Of Faith – the 2021 Dan Patch Horse of the Year – drew post 10, which did not stop her supporters from making her the overwhelming favourite at 3-5, while Racine Bell was the fourth choice at 6-1 leaving from post six.

Bartlett wasted no time launching Racine Bell to the front over Gias Surreal, with Watch Me Now N and Fire Start Hanover lining behind them. Test Of Faith sat sixth into the :26.2 first quarter. Those positions did not change until Test Of Faith took to chasing first over, gaining slowly as Racine Bell cut the half in :54.2.

“Tonight, I kind of let her go at her own speed and I got a little bit of a breather in the second panel,” Jason Bartlett said. “Then I let her do her own thing. Around the last turn she was still grabbing me pretty good, so I felt pretty confident.

“We've had a very difficult time with her running out,” Bartlett also said. “Over time we found something to help her to go a lot straighter. I think we're on the right track solving that and she's gotten a lot faster going straighter. She has gotten better and better every year.”

The final time was Racine Bell’s fastest win and three ticks off of Shartin N’s 1:46.4 track record for pacing mares. But it did best the stakes record 1:48.3 set by Camille in 2013 when the race was then named the "Artiscape".

David Dewhurst trains the five-year-old daughter of So Surreal for owners Chris S. and Dale G. Lawton. She has now won 27 races from 63 starts and earned $900,391 in her career.

Thanks Mike... Six Pack and Perfect Sting are both stallions that are currently standing at Deo Volente Farms in NJ. My guess is that they are sponsoring these races.

Why are The Six Pack and The Perfect Sting, both of which are races for mares, named after male horses? Wouldn't it mark FAR more sense to rename the pacing event The Bunny Lake or The Shartin, and the trotting race The Manchego or The Bee A Magician?