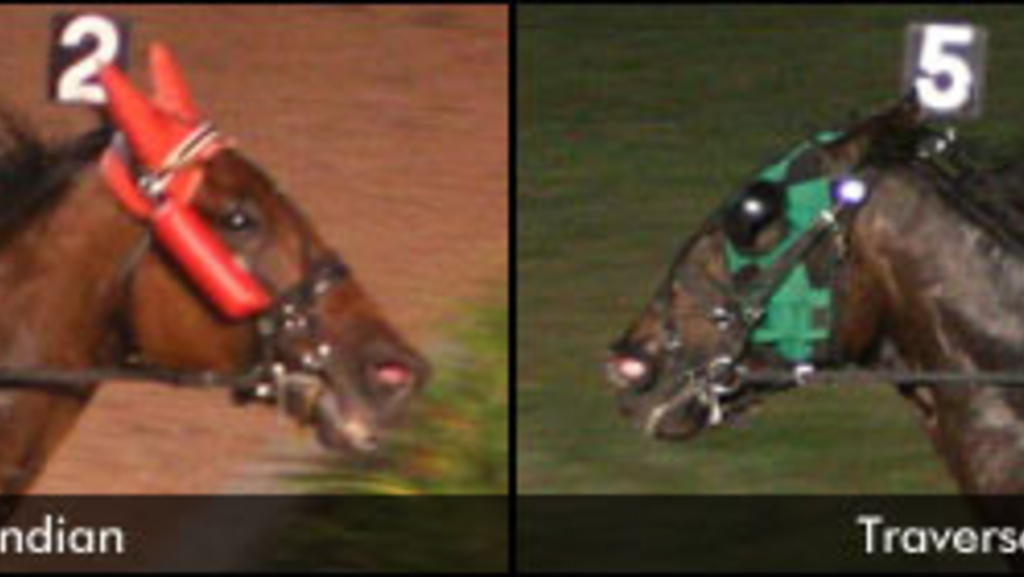 In the glory days of horse racing in North America, when horses were kings of sport, match races were commonplace – regular showdowns of racing’s top competitors. In recent years, they’ve become less and less common at harness tracks around the world.

However, Hanover Raceway will go back in time with a face-off of two great trotters on their upcoming Dream of Glory card. On Saturday, August 3, the Hanover track will host the Champions Match Race, between the last two victors of its signature event, the Dream of Glory trot.

World record holder and 2012 Dream Of Glory winner Summer Indian will battle it out on the racetrack against 2011 champ Traverse Seelster, who has posted the fastest trotting mile on any half-mile track in North America in 2013. On the line is the lion’s share of a $15,000 purse, with $9,000 to the winner.

The upcoming match race is intended to showcase the talent that comes out of the Ontario Sires Stakes Grassroots program, as well as Hanover Raceway’s top stake race, the Dream of Glory Trot. The two horses involved took very similar routes through their rookie and sophomore seasons before being shipped to the United States to race in their aged careers. 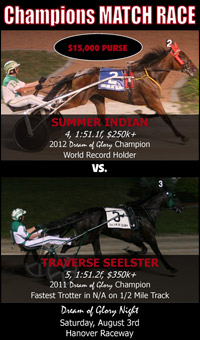 Traverse Seelster is the only horse to win both of Hanover Raceway’s trotting stakes finals as he was crowned Balanced Image champion at age two, and returned to win the Dream of Glory at three for trainer Frank O’Reilly. The trotter also earned over $60,000 in the Ontario Sires Stakes series, including four trophies while racing primarily in the Grassroots Series. Bred by Seelster Farms of Lucan, Ont., the son of Angus Hall now races out of the Gary Green Stable for owner Keith Pippi. In 2013, he’s posted four victories including track record performances at Dover Downs and Harrington Raceway in 1:51.2 and 1:54.1 respectively.

Summer Indian is fresh off a world record setting performance, as he became the fastest four-year old trotting gelding when he stopped the timer in 1:51.1 at Mohegan Sun Pocono Downs. As a two and three-year old racing in Ontario, the Majestic Son gelding collected over $120,000 in the OSS program including a runner-up finish in the Grassroots Final in 2012. His biggest win to date came in the 2012 edition of the Dream of Glory at Hanover Raceway as he took home $50,000 for former owners Parkhill Stud Farms and trainer John Bax. Now trained by top North American conditioner Ron Burke, Summer Indian is putting together a fantastic summer with four wins in ten starts. Summer Indian was bred by Scott Aimers & Brian Wong of Orton, Ont. and is now owned by the Burke Racing Stable LLC, Jack Piatt, Weaver Bruscemi LLC & RTC Stables INC, all based in Pennsylvania.

In a release, the track noted it was "overjoyed to be hosting two horses of this caliber, especially since their development and history of winning major stake races started at the Hanover grassroots track. Their success south of the border validates grassroots level racing in Ontario, and the development of Ontario-sired horses as some of the best in the world."

The Champions Match Race – as the event will be called – will be held as part of the 12th annual Dream of Glory card and the track will be giving away commemorative match race posters featuring Summer Indian and Traverse Seelster. Track management is also working on securing agreements for the Dream of Glory Day card to be simulcast and available for wagering at multiple tracks across North America. More details are to follow in the coming weeks.

This is great.We need things

This is great.We need things like this.Grand circuit weeks at
our tracks,remember Greenwood U.S drivers vs. Canadian drivers.
Match races like Forest Skipper vs. Falcon Seelster.Hambo heats
to win,remember 1989 hambo race off dead heat with Probe and
Park Avenue Joe.
Speed and world records are great to see and soon there will
be new ones with all the advances in our sport but we need to
bring back the sort of things that in the past generated crowds
beyond just the diehard racefan.
It would be fantastic to see more of this at Clinton,Dresden,
London,Hiawatha,GrandRiver and Flanboro.Greenwood in the early
70's was absolutely the place to be during GrandCircuit Week.
The place was packed.
Hanover has the right idea and when we look for ways to increase
attendance for the future of our smaller tracks especially,look
to this great move made by Hanover.

Back to the future. Good for

Back to the future. Good for Hanover Raceway. Hope is is a big success.

Back in 1986 The Charlottetown Driving Park(Red Shores)held a match race between three of the top horses in the Maritimes, Winner's Accolade, Waveore, and Angels Shadow. The purse was small but the owners were keen to see who would come out on top between the three. It was called the Battle of Champions and turned out to be a great race with Waveore on top in a Maritime track record time of 1.56.4 an unbelievable mile on the old hub-railed 1/2 mile race track of the day. There was a large crowd which produced a large wager and brought many new faces to the track. THe promotion cost very little but the media attention was significant and brought increased wagering and attendance to this little venue.

This is a great idea and the

This is a great idea and the Management at Hanover are to be commended for presenting such a novel idea . Many years ago such as the 1940's and 50's, match races were still popular and drew huge audiences .This is certainly a positive step in revitalizing the sport .

This is great for the

This is great for the residents of Hanover...

Its progess.... but if anyone should be paying attention...
Its track owners, and owners of horses. Both should be pushing for more of these.

What a great idea! Nice to

What a great idea! Nice to see my friends at Hanover doing everything they can to keep racing alive at their track. Nice work!

I think this is excellent

I think this is excellent publicity for the Industry. At a time when the transition panel is talking of new ways to build fans and attracting new customers. This sounds very exciting. I hope we see more of it at all tracks. Cannot wait. Ronda Markle

Fabulous!! Exactly the kind of stuff we need -- That is as long as it gets LOTS of publicity in the MAINSTREAM media - like the Toronto Star and CTV News etc. And it wouldn't hurt if our Provincial government bodies happened to read this too!