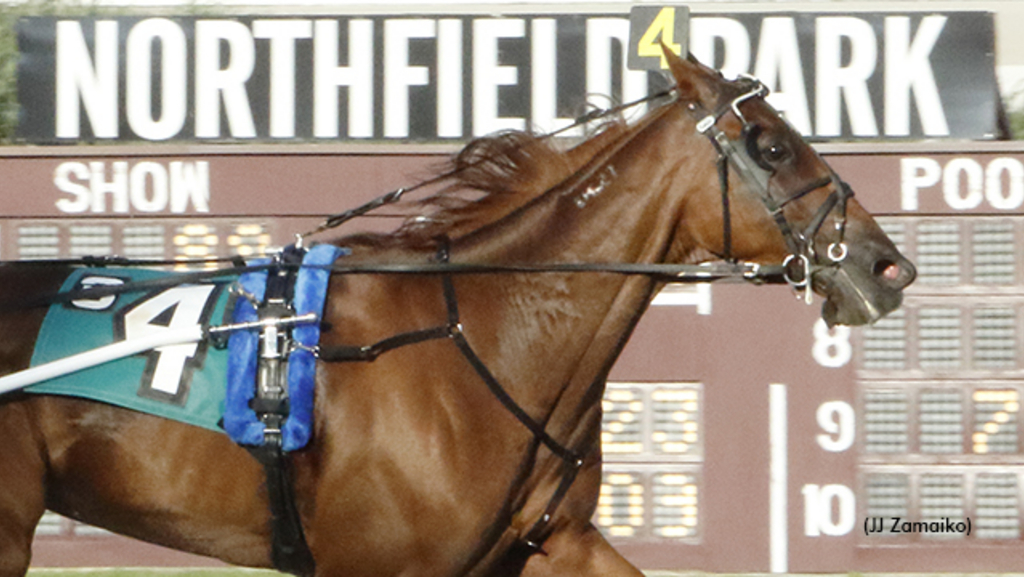 Three freshman trotting fillies found the winner's circle for the first time in their careers in first leg action of the Ohio Sires Stakes (OHSS) Sunday night at MGM Northfield Park. Each division carried a purse of $40,000.

In the first division, Smokinhotirishgirl and Anthony MacDonald grabbed the early lead over the "sloppy" track, cutting fractions of :29.1, 1:00, and 1:29.2. As the field rounded the final turn, Smokinhotirishgirl went off stride setting up a stretch run battle between Jumping The Line and Cali Red. Jumping The Line and Billy Davis Jr. grabbed the lead for a moment, but Cali Red, the 4-5 favourite and Aaron Merriman pulled ahead at the top of the stretch and held on to win by three-quarters of a length in 2:00.

Chris Beaver trains and co-owns the Triumphant Caviar filly with Sandra Burnett. Cali Red adds the win to a third-place finish earlier this year in her two starts.

Jumping The Line finished second with Shes Loveable was third.

In the second division, Sliding Sister — making her debut — sat fourth for most of the race until Chris Page took her three wide around the final turn to grab the lead. Sliding Sister held off a late charge from Rose Run Yolanda to win by three-quarters of a length in 2:00.2.

Rose Run Yolanda was second with Along In Time third.

In the final division, Truly Relentless went gate-to-wire to win for the first time this year. Chris Lems took the Long Tom filly to the lead off the gate and never looked back, cruising to a 2-3/4-length win in 1:57.4.

Scott Cox trains Truly Relentless, who has hit the board in all three starts this year, for Richard Gutnick, Thomas Pontone, and Joseph Lozito.

The first leg of the OHSS for two-year-olds wraps up tomorrow at MGM Northfield Park with three divisions of two-year-old colt and gelding trotters. First-race post time is 6 p.m. (EDT).

Eddie Miller won both $8,000 divisions of the Great Lakes Amateur Drivers Series on Sunday. The talented youngster won the third race with Seven Knights in 1:58.4 and scored a 1:58.3 win with Tootie two races later.

With those victories, Miller now has 11 wins in 29 starts this season.

Up behind Seven Knights in the first contest, Miller left softly from the two-hole as What A Pitstop and Steve Oldford took command, and they led the field by the quarter in :28.4. From there, they zipped by the half in :59 and were still in charge at the three-quarters in 1:29. But as they rounded the final turn, Seven Knights made his presence known and Miller moved him alongside What A Pittstop and then sped to the lead as they headed for home. And at the wire, Seven Knights was a 2-1/2 length winner. What A Pittstop finished second and Never Mind N took home the show dough for Tim Miller.

The winner, a seven-year-old Chapter Seven gelding, is owned by Gutnick, Losito and Hart and trained by Steve Cross. He paid $3.30 for the win.

In the other split, Don Sherman sent Dynamic Edge to the lead from the six-hole and they led their competition by the quarter in :29. They still had command when they trotted by the half in :59.3. At three-quarters, they were joined by Go Go George, but Dynamic Edge was still the one to beat. However, when Miller found racing room, he put Tootie in contention and the Uncle Peter mare was the strong horse and she went on to a solid length victory over Sherman's Dynamic Edge. Go Go George took home the show dough.

The winner, Tootie, a five-year old Uncle Peter mare, is owned by Ashley Dunn, Jamie Miller and Eddie Miller. She paid $7.20 for the win.