Walner Is “Ready To Rock” 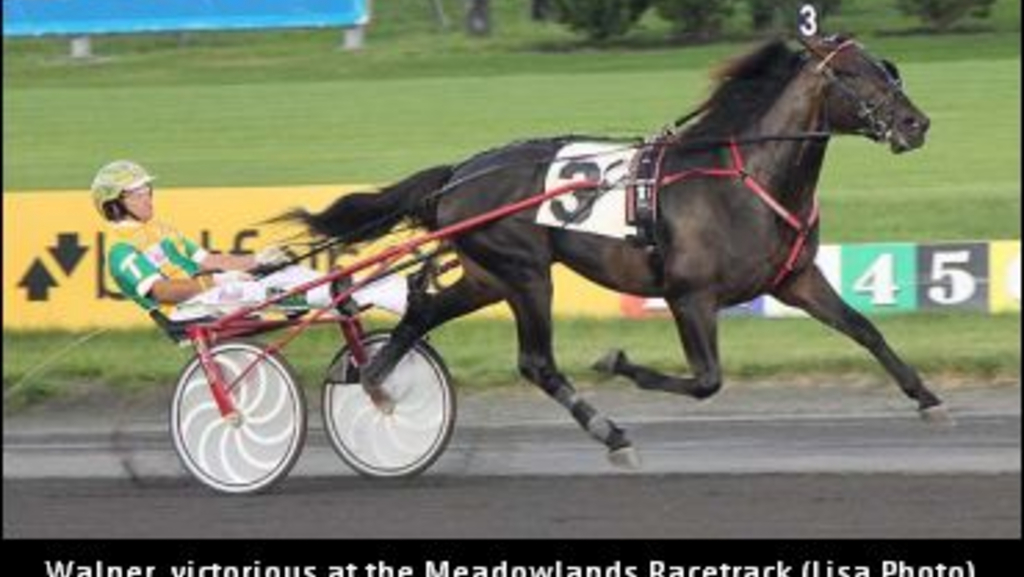 If Walner’s six rivals last week felt as though they were run over when the returning Dan Patch Award winner made his seasonal debut with a seven and a half-length victory in 1:51.1, it’s no wonder.

“You sit behind him and it feels like you’re driving a Corvette with a Mack truck engine,” Walner’s driver, Tim Tetrick, said after the win. “He’s ready to rock.”

The Dancer is part of a stakes-filled card that includes the $738,550 Crawford Farms Meadowlands Pace for three-year-old pacers and the $458,750 Hambletonian Maturity for four-year-old trotters, both of which will be broadcast live from 9-10 p.m. on cable’s SNY. Ariana G also will be in action in the first of two divisions of the Delvin Miller Memorial for three-year-old female trotters. First race post time is 6:30 p.m.

Walner will bring a six-race win streak (dating back to September) to the Dancer, which is one of three remaining open stakes prior to the $1 million Hambletonian on Aug. 5 at the Meadowlands. The colt has won eight of nine career races and earned $490,537 for owner Ken Jacobs and trainer Linda Toscano.

No horse has been closer than three lengths of Walner at the finish of any race during his win streak and his average victory margin during that span is nearly five and a half lengths.

“Honestly, right now it’s Walner and then the rest of us,” said trainer Ron Burke, who is sending three horses to the Dancer. “Somebody’s got to step up, or he’s got to step back.”

Tetrick and Toscano have each won one Hambletonian, which came as a team with Market Share in 2012. Toscano also trained Walner’s sire, Chapter Seven, who finished fourth in the 2011 Hambletonian. A year later, the Toscano-Tetrick combination led Chapter Seven to Horse of the Year honours in the United States.

“I’m very excited. It’s good to be in those shoes and have that opportunity to race those good horses. I’ve got a good horse here and hopefully nothing happens, knock on wood, and I do my job right. He’s got a full stakes schedule from here on out. We got a little slow start, but I think he’s going to make up for it.”

Walner, who is out of the O’Brien Award-winning mare Random Destiny, was purchased for $90,000 at the 2015 Lexington Selected Sale. He will start his $159,000 Dancer division from Post 8 in an eight-horse field. He is one of seven Hambletonian eligible horses in the race, with Bills Man, Southwind Woody, King On The Hill, Muscles Jared, Sortie, and Devious Man.

Devious Man, trained by Julie Miller, has won four of five races this season and enters the Dancer off a win in the Earl Beal Jr. Memorial.

The second Dancer division, with nine horses and a purse of $161,500, includes Hambletonian hopefuls Long Tom and What The Hill, who both have won three of four starts this year. Other Hambletonian eligibles in the field are Rubio, Such An Angel, Stealth Hanover, Fly On, Shake It Off Lindy, and Southwind Cobra.

What The Hill, who won last year’s Peter Haughton Memorial at the Meadowlands, will be making his first start since finishing third on June 2 in this year’s New Jersey Sire Stakes championship behind Long Tom and King On The Hill. He won a qualifier in 1:52.4 on July 8 at the ‘Big M.’

The colt is one of the three Dancer entrants from the Burke stable.

“He got real sick and it took a while for him to get over it,” Burke said. “Hopefully we got it out of the way and now we can get him ready and push toward the Hambo. It seems like he’s back good. He should be pretty close to perfect this week. Hopefully he’ll be ready to go.”

“’Woody’ adds Lasix,” Burke said. “This is a big step up for him. He tends to follow these horses, but not pass them. I’m hoping maybe Lasix will get him over it.

“Cobra since we took the hobbles off seems a little better, but the draw really didn’t help him.”