There was no stopping Time To Dance on his way to the winner’s circle in the 53rd running of the Governor’s Plate, presented by Summerside Chrysler Dodge, Saturday evening (July 10) at Red Shores at the Summerside Raceway. 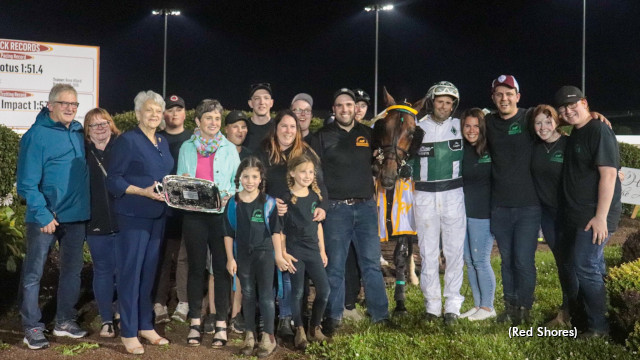 Driver Marc Campbell was aggressive from Post 1, setting his trainee on the lead in the $25,000 final while forcing hard-leaving Woodmere Ideal Art to get in the two-hole headed to a :27 opening quarter. Day Delight found himself caught on the outside as the field approached a half of :55.2, and that is when Time To Dance opened on the lead going to the three-quarters in 1:24.3 and then closing the mile in 1:53.1.

Rose Run Quest went up the passing lane in the stretch drive to finish eight lengths back in second with Avatar J rallying for third to complete the $157.20 triactor ticket.

Brent Campbell of Charlottetown and Matt McDonald of Edwards, Ont., share ownership of the winning five-year-old A Rocknroll Dance gelding, who scored his 23rd victory.

It was a five-win night for driver Campbell as he also won the $7,500 Bob Dewar Memorial Governor’s Plate consolation with Imalookertoo in 1:53.2 for trainer Danny Romo and owner Robert Sumarah of Halifax, N.S.

The Campbell barn had another large win on the evening in the $5,000 Ruby Chappell Memorial Open Pacing Mares final as Redmond Doucet picked up the catch drive on the Campbell-trained Dreamfair Zenfire and got up in the final strides to win in 1:55.2 for owners Ryan and Everett MacLeod of Souris.

Woodmere Stealdeal tasted defeat for the first time in his 14-race career as he had to settle for second in a $16,400 Atlantic Sires Stakes "A" division for three-year-old colt pacers as Dustylanegoliath battled past in the stretch to win in 1:54. Gilles Barrieau trains and drives Dustylanegoliath for owner Daniel Ross of Belfast.

The other $16,400 "A" division for sophomore colts saw Jadensmagicsteel deliver the biggest win of his career in 1:55.3 for Boys Will Be Boys Racing of Charlottetown and trainer Ron Gass. It was the third-straight win for the son of Steelhead Hanover–Meridian Magic. Myles Heffernan Sr. sat in the sulky.

The $3,000 "B" divisions of the Atlantic Sires Stakes for three-year-old colts had Whistler and Jason Hughes prevail in 1:58, with Silver Jake and Devon Wallace winning in 1:58.3 in the other split.

Moonwriter and David Dowling won the $3,100 Premier’s Pace in 1:55.2 for trainer Colin Johnson while the Minister Of Finance Pace was claimed by Woodmere Beachline and Ken Murphy in 1:56.2 from the Wade Sorrie stable.

The night had an all-time record handle for the Summerside Raceway with $120,231 wagered on the program.

Going back to last August,

Going back to last August, Time To Dance has now won 12 of his last 14 races.