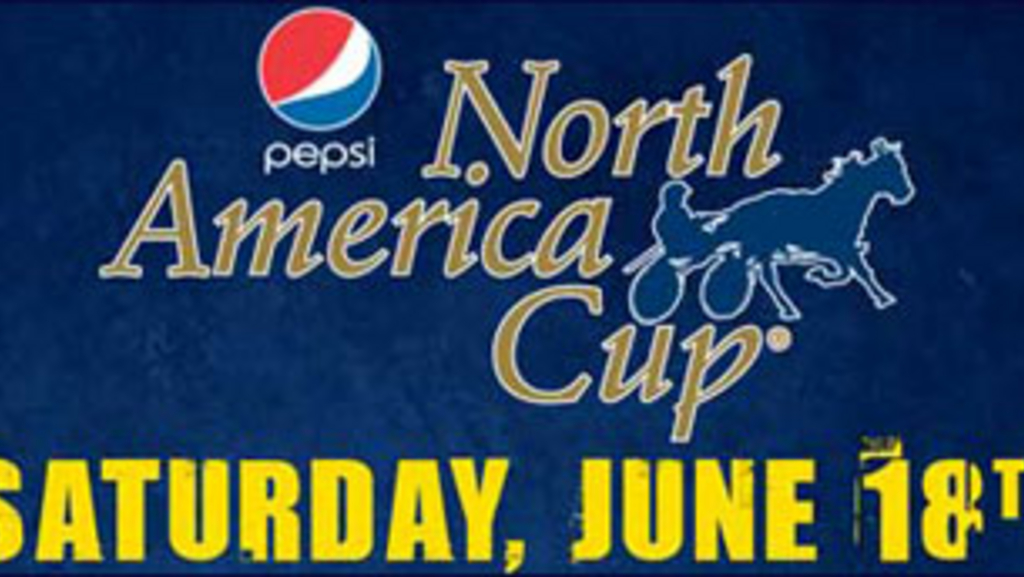 A total of 23 of the continent's top three-year-old pacing colts and geldings have been drawn in to contest Mohawk Racetrack's Saturday, June 11 eliminations for the $1.5 million Pepsi North America Cup

With 23 horses having been entered to contest the $50,000 eliminations, two of the dashes will feature eight-horse fields, while the other will feature seven combatants. The elims have been carded as Race 3, Race 4 and Race 6.

The top three finishers from each elimination, plus one fourth-place finisher drawn by lot, will gain entrance to the $1.5 million 'NA Cup,' the country's richest harness race and the Woodbine Entertainment Group's signature standardbred event. The connections of horses which win eliminations will be able to pick their horse's post position for the 'Cup.' 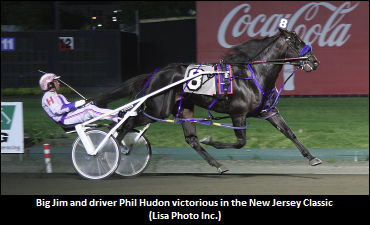 The first elimination will be headlined by 2010 Dan Patch and O'Brien Award winner Big Jim. The James 'Friday' Dean-trained and Phil Hudon-driven son of Western Ideal will start from Post 3 in the seven-horse field for owner Jim Carr of Hamilton, Ont. The son of Western Ideal tasted defeat for the first time this season in the Somebeachsomewhere Stakes, formerly known as the Burlington Stakes. The career winner of $1,071,580 has won eight of his 13 career races and earlier this year was assessed as the 3-1 favourite to win the NA Cup in Trot Magazine's 2011 Pepsi North America Cup Spring Book. After Big Jim's loss in the Somebeachsomewhere, Dean commented that “Everyone acts kind of shocked when he does get beat, but it’s just the way the race set up."

Big Jim will be joined in the first elim by the Daniel Martin-trained and Jack Moiseyev-driven Bestofbest Hanover, who, after some small equipment adjustments, made himself known to all with his victory in the Somebeachsomewhere last weekend. The Western Hanover colt will be looking to record his fourth win of the season in the elim, where he will start from Post 5. Owned by L Ecurie Triple P Inc. of Quebec, the third foal out of star pacing mare Bunny Lake will be looking to record his seventh career win in what will be his tenth overall start.

Custard The Dragon, who has won two of his five races this season, including the $300,000 Max C. Hempt Memorial Pace, will start from Post 7 in the first elim. Montrell Teague has been listed to drive. The brown Dragon Again colt has won five of nine career races and has banked $264,427. The $28,000 yearling purchase is owned by trainer George Teague, Jr. of Harrington, Delaware along with Ted Gewertz of New York, New York, Robert Feldman of Palm Beach, Florida and Fannin Racing LLC of Lincoln, Delaware.

Powerful Toy colt Powerful Mist has also drawn into the first elim and will start from Post 4. The Wayne Givens-trained bay was caught late by Custard The Dragon in the Hempt Memorial, where he settled for a second-place finish. The colt will be looking to improve on his third-place finish in the Somebeachsomewhere. The bay races for owners Legacy Racing of De. Inc. of Seaford, Delaware, Niel Gargiulo of Milford, Delaware and Louie Paglierani of Valrico, Florida. Tim Tetrick has been listed to drive.

Up The Credit To Headline Second Cup Elim 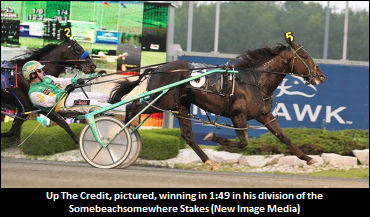 The Carl Jamieson-trained and Jody Jamieson-driven Up The Credit has stamped himself as a serious NA Cup player with his stakes record 1:49 mile in the Somebeachsomewhere. The brown Western Terror colt has drawn Post 3 in the second Cup elim and will be looking to add to his $148,440 bankroll for trainer Jamieson and co-owners Thomas Kyron of Toronto, Ont., Brian Paquet of Quebec and Joanne Morrison of Beeton, Ont.

After the Somebeachsomewhere, Carl Jamieson went on the record as saying that Up The Credit is faster than $1.6 million earner Santanna Blue Chip, who is currently standing at stud. To read Jamieson's comments, click here.

The Casie Coleman-trained Betterthancheddar, who has already paced a pair of sub-1:50 miles this season, has drawn Post 2 in the second elim. The bay Bettors Delight colt won by more than 10 lengths in 1:49.2 during a May 30 overnight at Mohawk and followed that up by just getting caught late by Roll With Joe in their 1:49.3 division of the Somebeachsomewhere. Although he did qualify as a two-year-old, the $30,000 yearling purchase went unraced in his freshman season. Betterthancheddar is owned by Steve Calhoun of Chatham, Ont. and the West Wins Stable of Cambridge, Ont. Brett Miller has been listed to drive.

Having prepped with a trio of miles over Tioga Downs, The George Teague, Jr.-trained Feel Like A Fool will start from Post 1 in the second elim. The Art Major gelding won six races and didn't miss the board in 11 starts as a two-year-old; a season in which he banked over $579,000 in purses and took a sub-1:50 mark (1:49.4) over the Red Mile in Lexington, Kentucky. Feel Like A Fool was a $30,000 yearling purchase and is owned by Kovach Stables LLC of Milford, Delaware, Ted Gewertz of New York, New York, Robert Feldman of Palm Beach, Florida and George Teague, Jr. Inc. of Harrington, Delaware. Brain Sears has been listed to drive.

The Jimmy Takter-trained Rocknroll Hanover colt Grams Legacy, who will be making just his third pari-mutuel start of the season, has drawn Post 4 in the second elim. The second foal out of the star pacing mare Kikikatie last raced in the New Jersey Classic on May 28, where he was handed an outside starting spot and raced an overland trip before finishing fifth in 1:51.3. Brian Sears has been listed to drive Grams Legacy for Lothlorien of Cheltenham, Ont. 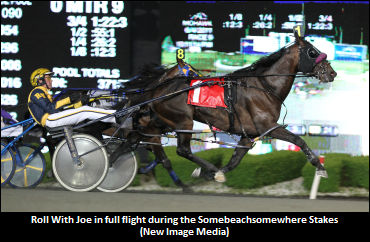 The Somebeachsomewhere Stakes proved to be a bit of a stepping out party for Cams Card Shark colt Roll With Joe, who put forth a versatile effort for trainer Ed Hart and driver Randy Waples. Roll With Joe, who went on to win in 1:49.3 in his Somebeachsomewhere split, is owned by Blue Chip Bloodstock Inc. of Wallkill, New York, Stephen Demeter of Tarrytown, New York, the Not To Worry Stable of New York, New York and Winbak Farm of Chesapeake City, Maryland. The career winner of four of 11 races and $215,240 in purses will start from Post 2 in the third elim. Randy Waples has been listed to drive. In an exclusive with Trot Insider, trainer Hart spoke about Roll With Joe heading into the Cup elims.

After having prepped in Pennsylvania, the Ron Potter-trained Western Hanover colt Big Bad John will start from Post 7 in the third elim. Owned by Winchester Baye Acres Inc. of Ocala, Florida, Big Bad John has not finished worse than second in any of his 12 starts, which include 10 victories. The career winner of $295,318 shows a lot of front-end speed on his past race lines. Brett Miller has been listed to drive. Potter and Miller have commented on Big Bad John heading into the eliminations. Click here to read what they had to say.

The 2010 Metro Pace winner and this season's Upper Canada Cup victor Mystician has drawn Post 1 in the third elim. Trained by Jeff Gillis and driven by Jody Jamieson, the bay Camluck colt went over the $1 million mark in career purse earnings on May 28 when he triumphed in the Upper Canada Cup by open lengths in a wrapped-up 1:50.2. Gillis, of Hillsburgh, Ont., owns the Mystician along with Ken Henwood of Mississauga, Ont., Mac Nichol of Burlington, Ont. and Gerald Stay of Buffalo, New York.

To view the replays of all three divisions of the Somebeachsomewhere Stakes, click here.

The fields for the three elims are listed below.