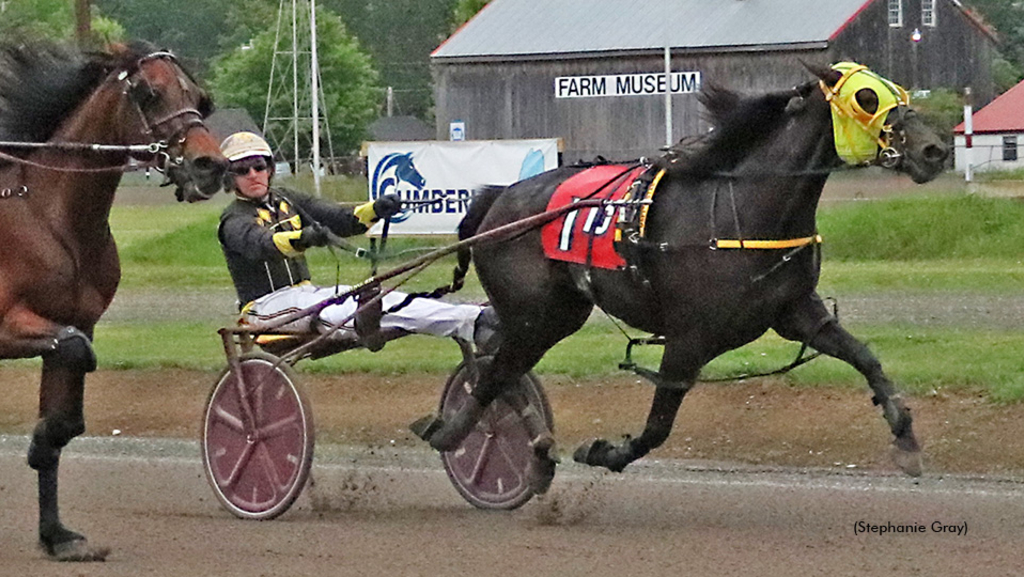 A change of scenery was all it took for Heartofgold Devie to pick up her first win of the season on Friday (June 3), as Steven Wilson steered the four-year-old Creatine mare to victory in the $6,000 Open II Trot at Cumberland.

Leaving from pylon position, Wilson was happy to let Kyrie Deo (Mark Athearn) take command of the tempo and post opening fractions of :30.1 and 1:00.4.  As the field rounded the paddock turn, Prescott (Andy Harrington) flushed the cover of Little Macabee (Aaron Hall), which moved the outer flow towards the leaders going down the backstretch in a lively 1:30.1.

With Little Macabee stalled on the outside third, and while looking Heartofgold Devie right in the eye, as the field straightened out into the home stretch, Wilson found room along the inside and poked a neck in front of the pacesetting Kyrie Deo at the finish line in 1:59.4.  Little Macabee was third in a tight finish.

Trained by Charlene Cushing and owned by Mona Dodd, the metropolitan invader paid a surprising $28.60 to win.

Earlier in the card, PCs Wildcard, a 13-year-old son of Sand Chaser, picked up his 50th lifetime victory for trainer/driver Mike Stevenson and owner Eddie Fournier Jr., paying $18.40 to win.

Drew Campbell won three races on the program, vaulting him into first place in the drivers’ standings with a total of 22 victories on the season.  Bruce Ranger and Steve Wilson both piloted two winners on the day.

Racing resumes Saturday (June 4) at 4 p.m., with the extended pari-mutuel meeting active each weekend through July 23.

The final race on both Friday and Saturday features the track's 20-cent Hi-Five (Pentafecta), with a low takeout of 16 per cent.