Will The Franklin Be The Best Race Ever? 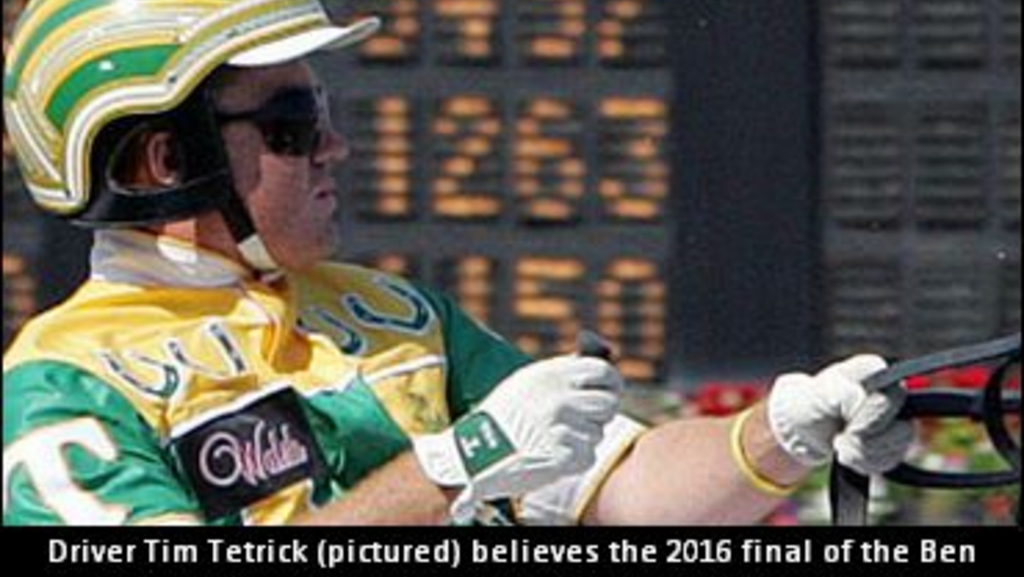 The Franklin brings together the sport’s most talked-about horses – returning Dan Patch Award Horse of the Year Wiggle It Jiggleit and Breeders Crown champions Always B Miki and Freaky Feet Pete – for their first meeting as a group.

Each won his respective Franklin elimination last week; Always B Miki in 1:47 to equal the fastest mile ever on a five-eighths-mile track, Freaky Feet Pete in 1:47.1 to set the record for the fastest ever by a four-year-old on a five-eighths oval, and Wiggle It Jiggleit in 1:48.1. To view replays of the eliminations, click here.

Wiggle It Jiggleit is ranked No. 1 in the current Hambletonian Society/Breeders Crown poll, with Always B Miki at No. 2 and Freaky Feet Pete at No. 4.

Tetrick will drive Canada’s 2015 Horse of the Year, State Treasurer, in the Franklin. State Treasurer finished second to Wiggle It Jiggleit in his elimination.

“I’m so glad I get to drive State Treasurer, but part of me wants to sit on the sidelines and watch those great horses go battle,” Tetrick said. “It could set up to be the best race that harness racing has ever seen, in my opinion.

“You’re getting ready to see some great horses. Even my horse, if he got a nice cozy trip and they battle going 1:19 (to three-quarters) and he’s sitting two or three (lengths) off it wouldn’t be a surprise if he gives them a run. He’s been there, done it, he’s a warhorse. I was very impressed with him the other day. He finished a good second to Wiggle It Jiggleit. I expect (trainer) Ian Moore to have him on his toes. It’s going to be a great race. I’m excited.”

Newborn Sassy heads to the $300,000 Lynch Memorial at The Downs at Mohegan Sun Pocono off a 1:51.3 win in her elimination last week and will start the final from Post 3 with driver Tim Tetrick. Interestingly, it was Tetrick’s familiarity with Newborn Sassy’s family that led to CC Racing’s Ray Kusinski and Jo Ann Looney-King purchasing the then-yearling filly for $38,000 at the 2014 Lexington Selected Sale.

“I drove some of her sisters and family and they all tried really hard and were really nice horses,” Tetrick said. “I really liked her at the sale and I told Ray and Jo Ann that I liked this filly. Luckily, they bought her and she’s turned out to be really nice. She’s got that same attitude (as her siblings). You wouldn’t even know she’s there in the barn, but she sees the racetrack and she likes to do her job.”

A daughter of Western Ideal out of the hard-grinding $607,466-earning mare Sass Newton, Newborn Sassy has won nine of 17 career races and earned $301,485 for the training stable of Jim King Jr. and Looney-King. She was slow to get to the races last year because of having bone chips removed, but finished her two-year-old campaign with eight consecutive victories, including the Matron Stakes.

Her win in the Lynch elimination was Newborn Sassy’s first triumph of this season, but she had hit the board on four other occasions and finished within one and three-quarter lengths of the winner in all but one start.

“She’s real handy and she’s been right there every week,” Tetrick said. “She’s not a one-way filly, so that makes her very competitive. Jimmy and Jo Ann have done a great job teaching her how to be a racehorse.”

Pure Country won her Lynch elimination by a neck over Blue Moon Stride in 1:50.1. Darlinonthebeach was third. Newborn Sassy captured her elim by a neck over I Said Diamonds, with JK Fannie third.

The morning line has Pure Country as the 5-2 early favourite, followed by Darlinonthebeach at 3-1, Newborn Sassy at 4-1, I Said Diamonds at 5-1, and Blue Moon Stride at 6-1.

“It’s going to be a great race,” Tetrick said. “I know Pure Country and Darlinonthebeach, they’re really tough. I respect I Said Diamonds; she’d been off for 30 days so she’s going to be way better this week.

“Hopefully I can be in the right spot at the right time.”

Bar Hopping was coming off a fourth-place finish in the Goodtimes Stakes at Mohawk Racetrack in Tetrick’s first time behind the colt. He will start the Beal final from Post 9.

“I kind of put him in a bad spot in Canada; I took the inside route and it was a bad situation,” Tetrick said. “The other day I was more aggressive with him and he beat the best trotting colt in the country right now. And he did it right, leaving in :26.3 (for the opening quarter-mile), letting horses go and then coming first up to beat the champion.

“He showed me what he can do. He’s a very, very nice horse. He’s beautifully gaited and he’s another one you can drive any way. Even if he’s in a bad spot he can make up a lot of ground, so I really like that about him.”

Dayson, who won the Beal’s remaining elimination by a nose over Brooklyn Hill in 1:52.3, will start the final from Post 4.

In the Hempt, Tetrick will sit behind returning Dan Patch Award divisional champ Boston Red Rocks, who finished second by a half-length in 1:49.3 to O’Brien Award winner Control The Moment in his elimination. Boston Red Rocks was coming off a fourth-place finish in the North America Cup – his only off-the-board finish in 15 lifetime races.

“I was much happier with his effort,” Tetrick said. “I know he got a great trip, but he was kind of back to his old self. In Canada, he wasn’t himself. I think he’s going to go a good race. He doesn’t like when they turn it into a big speed battle, but if they keep close and he can get an inside trip he can sprint good for a ways.

“They’re going to bounce around,” he added about the competitiveness of the three-year-old male pacing division. “It’s a very long year and when you have a three-year-old pacing colt at that level it’s war. It’s full tilt every week.”

The fields for the Sun Stakes Saturday featured events appear below.

Always B Miki is a

Always B Miki is a monster.
Now all you WIJI best horse ever folks have had their dose of reality.
The king has been crowned
WIJI could not keep up

Wow, that's a HUGE statement from Tetrick , that's kinda like Babe Ruth wanting to watch the World Series. I agree this might be the best horse race of all times.