After more than 30 years of tireless work in the Ontario harness racing industry, Dr. Ted Clarke is retiring from his post as the General Manager of Grand River Raceway in Elora, Ont.

Clarke will continue in his role until the end of September 2017. The Grand River Agricultural Society (owner/operator of Grand River Raceway) will hire a new Director Of Operations and the search will begin within the next month.

Recognized by his peers as an innovator in the horse racing industry and highly regarded for his thoughtful insights, Clarke’s strong and steady leadership established Grand River Raceway in 2003 and its reputation as an award-winning racing and entertainment destination.

Before Grand River Raceway, the retired veterinarian led numerous initiatives to put the track’s predecessor, Elmira Raceway, on the path to stability, including the inauguration of its Industry Day Celebration, the Battle of Waterloo (a race for Ontario-sired horses), and the establishment of the Ontario Teletheatre Network.

In 2014, Clarke was inducted into the Canadian Horse Racing Hall Of Fame in the Builder’s Category. 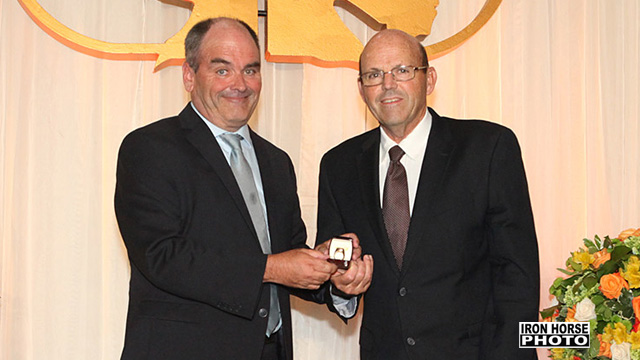 “We are in a time of significant change that will demand commitment and the flexibility to develop new solutions to the challenges that come with change,” Clarke explained. “I will be 70 in July and to be frank, it’s time for someone more prepared to make the necessary commitment to lead the Grand River Agricultural Society and the Grand River Raceway into the future.

“I have been blessed with the loyalty and support of an outstanding group of co-workers at the racetrack — some since the days of Elmira Raceway. The Board of the Grand River Agricultural Society has supported me through good times and bad, and I must say a special thanks to those present and former board members who carried the load of moving the Raceway from Elmira to Elora.

“To the horsemen and horsewomen who have supported Grand River with entries, ideas, participation in our promotional events, been goodwill ambassadors, and provided much needed constructive criticism, I say a heartfelt thanks.

“I must acknowledge the significant role of the regulators who supported the change to common pool wagering on simulcast signals, a teletheatre network, and mixing of live racing with a simulcast signal, all of which kept racing alive in Elmira in the 1990s.

“Finally, I am most grateful for the continuing support of our customers, and for their advice,” said Clarke.

“Ted has been at the helm of the success of our operations, both past and present, for nearly three decades,” said Paul Walker, President of the Grand River Agricultural Society. “Through thick and thin, he has remained committed to our organization and the Ontario horse racing industry as a whole. He’s a visionary and a thoughtful advocate, and we have all benefited from his fierce loyalty,” said Walker.

“Ted’s contributions to our business and the greater community are vast and unrivalled. The impact of his efforts will continue to shape our success far into his well-deserved retirement.”

Congratulations and best wishes, Ted. You will be missed at Grand River and throughout the industry, but your retirement is well deserved. Enjoy the years ahead!

A huge loss for harness

A huge loss for harness racing in Ontario. Wishing you all the best in retirement Ted, and thanks for everything you have done.

Best wishes for your

Best wishes for your retirement, Ted. Many fond memories from Friday nights and Saturday afternoons at Elmira Raceway.

Congratulations to Dr. Clarke on his upcoming retirement. The sport as a whole owes a debt of gratitude to this fine gentleman who has worked so diligently over the years to promote the present and preserve the past. The Grand River track will always be associated with him. I know that Dr. Clarke has had some important and interesting jobs in the past but I am sure he will find his next will be the most fulfilling of his lifetime. Retirement is not the end; it is just the beginning. Enjoy.