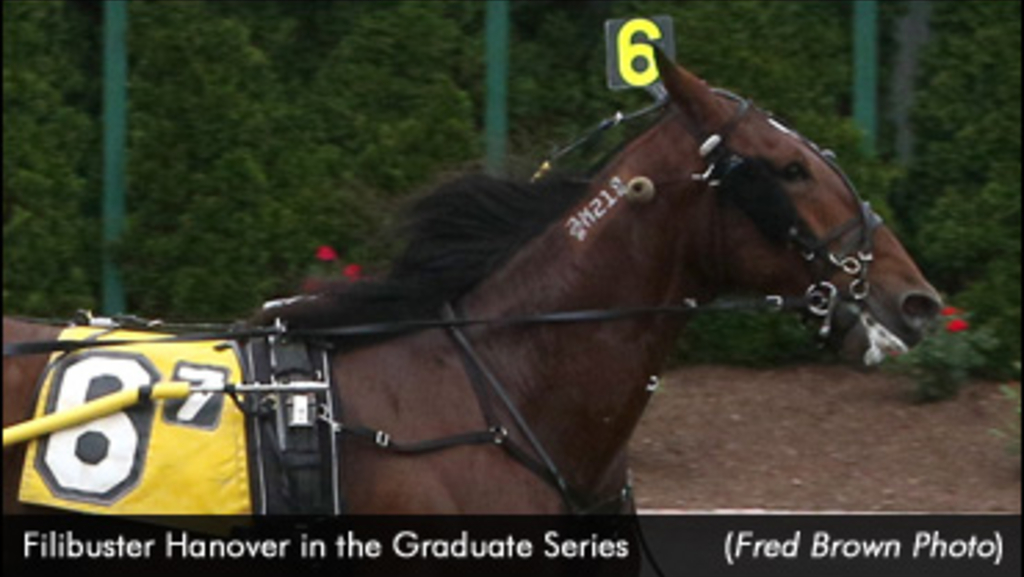 Tioga Downs hosted three divisions of the Graduate Series for four-year-old pacers and two divisions for trotters. All five raced for a purse of $50,000. Also on hand were three divisions of New York Sire Stakes (NYSS) for sophomore pacing colts and geldings.

Millionaire pacer Filibuster Hanover ($2.50) went right to the lead in his division and carved out all the fractions (:27.4, :56.3, 1:24, 1:50.3). Funknwaffles (Corey Callahan) went first-over and was within a nose and looked like he might get by, but Filibuster Hanover had other ideas. He dug in and withheld the challenge to score the victory. Funknwaffles settled for second. Bloodline (Tim Tetrick) followed in the pocket the whole way and finished third.

Filibuster Hanover is a four-year-old gelding by Somebeachsomewhere. He is owned by Burke Racing Stable, Weaver Bruscemi, Joseph Di Scala Jr, and J & T Silva Stables. The Ron Burke trainee is now perfect in his first five starts of the season and has won 12 races lifetime.

Miso Fast (Tim Tetrick) held off the late rush by Western Joe (Scott Zeron) to capture the second division of the Graduate Series for pacers.

Miso Fast ($3.10) went to the lead and was first at every pole (:27, :53.4, 1:21, 1:49.2). Boogie Shuffle (David Miller) went three-wide around the last turn to pressure Miso Fast, who responded and opened up by two lengths in mid-stretch. Western Joe followed in the pocket trip the whole way. He found an opening on the inside but came up just short and had to settle for second. Rock N Tony (Matt Kakaley) came up to finish third.

Miso Fast is a four-year-old horse by Roll With Joe. Owned by Winchester Baye Acres LLC and trained by Virgil Morgan Jr., he won for the third time this season and notched career victory number 10.

Highalator (David Miller) was impressive in a gate-to wire win in the third division for pacers.

Highalator ($3.80) charged out of the gate and never looked back. Owned by Joann Dombeck, Midsize Construction Inc., and trainer Jenny Bier, he owned all the fractions (:27, :55.3, 1:22, 1:49), posting the fastest mile of the day. Donttellmeagain (Tim Tetrick) was second with Beckhams Z Tam (Ricky Macomber Jr.) finishing third.

Highalator is a four-year-old horse by Somebeachsomewhere. The win was his sixth of the season and the 18th of his career.

Guardian Angel As (Tim Tetrick) used his wings to win the first division of the Graduate Series for four-year-old trotters.

Fraser Ridge (Dave Miller) laid down the early fractions (:28., :56.2, 1:24). After favourite Yes Mickey (Andrew McCarthy) went on a break, Guardian Angel As ($5.90) went three-wide at the top of the stretch and flew by to win in a lifetime-best mark of 1:52.4. Lord Cromwell (Jim Marohn Jr.) finished second with Fraser Ridge hanging on for third.

Guardian Angel As is a four-year-old horse by Archangel. He is owned by ACL Stuteri Ab and Kjell Johansson while trained by Annette Lorentzon. He is two-for-two this season and has won 11 times in his career.

Moonshiner Hanover (David Miller) pulled off a big upset victory in the second division for trotters.

Top Flight Angel (Andy Miller) put up all the early fractions (:28., :57.2, 1:25.1). Moonshiner Hanover ($51.50) stayed patiently in the pocket until he got an opening at the top of the stretch then blew by to win in a career-best time of 1:53.1. Bills Man (Corey Callahan) charged late to finish second and Top Flight Angel ended up third.

Moonshiner Hanover is a four-year-old horse by Andover Hall. Owned by Synerco Ventures, Bill Manes and trainer Christopher Beaver, he won for the third time this season and seventh lifetime.

Springsteen (David Miller) was the boss in the first $40,600 division of the NYSS for sophomore colts and geldings.

Springsteen is a three-year-old colt by Rock N Roll Heaven, owned by Allard Racing, Bruce Soulsby, Alan Weisenberg and Kapildeo Singh, while trained by Rene Allard. The win was his first 2018 and fourth of his career victory.

After Ostro Hanover led them to the first quarter in :26.4, Trump Nation (Jason Bartlett) took over before hitting the half in :55.3. Heavenly Sound ($22) went first-over after the halfway point. Heavenly Sound and Trump Nation battled back and forth around the final turn. Heavenly Sound shook loose in the stretch and held off a late charge by second-place finisher Ideal Feeling (Tim Tetrick) to win in 1:50.4. Trump Nation ended up finishing third.

Heavenly Sound is a three-year-old colt by Rock N Roll Heaven, owned by M And M Harness Racing and trained by Bruce Saunders. The win was his fourth of the season and career victory number six.

Keystone Tenacious (Mark MacDonald) was a gate-to-wire winner in the last $39,900 division for NYSS pacers.

Keystone Tenacious is a three-year-old colt by So Surreal. The win was his second this year and third lifetime.