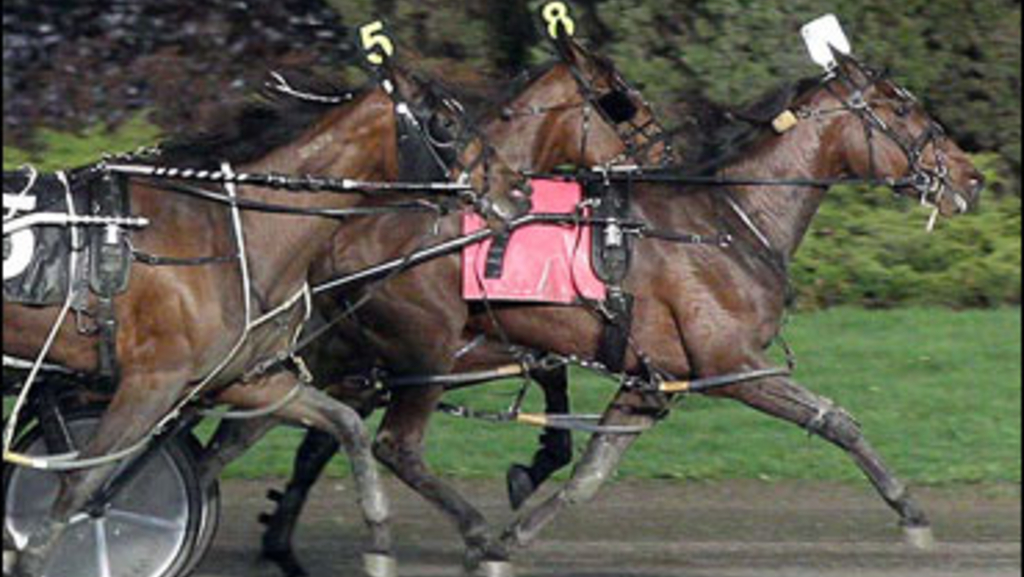 Trainer Bob Young swept a pair of $25,000 Princess Stake eliminations on Friday night at Woodbine Racetrack with his son, driver Scott Young, pulling off a 15-1 upset in the second split

for his first WEG circuit win. The Princess Stake, formerly a multi-leg series, is for three-year-old pacing fillies that are non-winners of $100,000 in 2010.

Teaming with driver Roger Mayotte in the first elimination, Bob Young sent Dreaming out to record a new lifetime mark.

Dreaming and Mayotte set up shop on the front end after leaving from Post 4 and the duo cruised through fractions of :28, :58.1 and 1:26.3 en route to an one and three-quarter length victory in 1:54.1. The co-favoured Mater Deo (Mark MacDonald) advanced first over to finish second and 80-1 longshot Highland Candy Bar (Garrett Whelan) was third with Lucky Taryn (Mario Baillargeon) and the other co-favourite Artic Byrd (Scott Zeron) rounding out the top five fillies, who will advance to next week’s final.

Dreaming paid $7.50 to win as the 5-2 third choice. The homebred Rocknroll Hanover-Respectednbeloved filly is owned by Canamerica Capital Corp. and Hyatt Holdings Inc. of Milton, Ont. Unraced at two, Dreaming has won four of 10 starts this year while banking $44,040.

Itstimeformetofly (Jack Moiseyev) took off from Post 8 and established command during a :26.4 opening quarter ahead of Post 7 starter Ok Dynasty and Young while Dreamfair Misty (Randy Waples) made a break in the early going.

Itstimeformetofly proceeded to the half in :56.1 and three-quarters in 1:24.3 with Cheap N Easy (Keith Oliver) advancing first over and applying pressure. Coming out of the turn, Cheap N Easy and Ok Dynasty hooked wheels, but the pair continued on with Ok Dynasty pulling the pocket to get up for the half-length victory in 1:54. Itstimeformetofly was second with Mach Lindy (Scott Zeron) third. Camille (Jason Brewer) came on for fourth while Cheap N Easy faded to fifth.

The judges ruled that the contact made at the top of the stretch by Cheap N Easy and Ok Dynasty was incidental and as a result no changes were made to the finish order.

Ok Dynasty paid $32.10 for the 15-1 upset. The daughter of Art Major-Erin Kay is owned by Young, breeder Oak Knoll Stables of Campbellcroft, Peter Berry of Toronto and Brian Barton of Carlisle, Ont. The win was Ok Dynasty’s second of the season in 10 starts and third lifetime pushing her earnings to $53,032.

Congratulations Scott!!! Big move off the gate and a nifty little bit of stick handling to get out late...a well deserved first WEG victory with many more to come no doubt!