Can’t Catch Mandeville At ‘The Spa’

Seeing as though there was not an Open Trot on the card, Saratoga Casino Hotel’s $12,500 Winners Over served as the program’s feature on Sunday afternoon (May 5).

Veteran Open trotter Cash Me Out, by Cash Hall, had been assigned the outside post for the feature and was the public’s 1-5 betting favourite. The veteran trotter didn’t come into the race in his best form, but still looked to be the clear one to beat on paper.

Mandeville, by Majestic Son, has also spent much of his year in the local Open, and though he came into Sunday’s try winless in 2019, it looks as though he would be Cash Me Out’s top threat.

Mandeville and his driver, Jimmy Devaux, were aggressive in the early going and powered out to an easy lead. After having cruised through the opening half in 56.3, Mandeville lengthened his lead during the second lap and went on to power away to a decisive win. 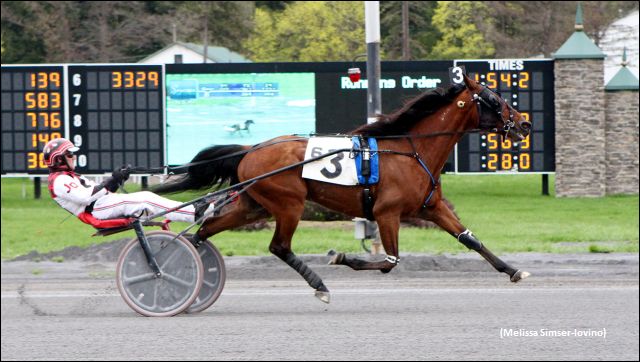 Mandeville, pictured victorious at Saratoga Casino Hotel on May 5, 2019.

Mandeville, who stopped the timer in 1:54.2, now owns the fastest trotting time of the season at the ‘Spa.’

Windsun Missile (who was driven by Brett Crawford), the runner-up in last week’s Open, was again second best on Sunday. Cartier Volo (Frank Coppola Jr.) earned the show spot. Trying to come from last in the 1:54.2 mile proved to be too difficult for the favoured Cash Me Out, who had to settle for fourth.

Mandeville paid $11.00 to win and led an exacta and triple in the six-horse race that paid $45.80 and $154.50, respectively. Mandeville is trained by Don Billings for owner Jessica Anderson of Dorr, MI.

Live racing at Saratoga will resume on Wednesday with first post at a 12:00 noon.