Magnificent Seven just got by Cant Say No to take the $15,300 featured trot on Tuesday afternoon at The Downs at Mohegan Sun Pocono, but the winner had to share the spotlight with driver Tyler Buter and trainer John Butenschoen.

Magnificent Seven just got by Cant Say No to take the $15,300 featured trot on Tuesday afternoon at The Downs at Mohegan Sun Pocono, but the winner had to share the spotlight with driver Tyler Buter and trainer John Butenschoen, who combined for four successes with developing horses in the 'non-winner of two races' class on a day where each earned five overall winners.

Magnificent Seven, a son of Chapter Seven trained by Ed Hart and driven by Jason Bartlett, worked out a two-hole trip behind fellow 8-5 shot Cant Say No, then caught that tough foe by a head at the end of a :56.3 back half and a 1:54.4 mile, giving him a new mark. The winner has been a model of recent consistency for the ownership of Richard Gutnick, Joseph Lozito Jr., T L P Stable, and Ted Gewertz. 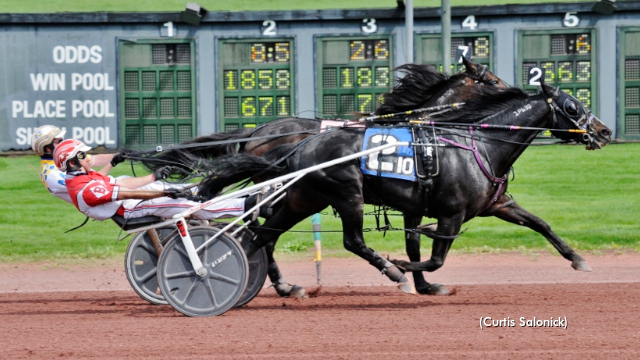 John Butenschoen brought a couple of truckloads of sharp young horses up north from Florida, and the foursome of younger stock who won Tuesday represents the recent norm than any random success pattern, with Buter and Butenschoen finding the teaming mutually profitable.

Tuesday’s best example would be the Donato Hanover three-year-old filly Melania, a winner in her 2021 bow who set a tempo of :28.1, :57.3, and 1:26 in her quest for two straight. When sitting right behind you is Imharta AM S, a Marcus Melander trainee who lured Brian Sears for a Pocono cameo, you could have reason to be concerned, but Melania continued on strongly for Buter to take a half-length victory and lower her mark a tick to 1:54.3 for Dr. Patty Hogan.

There was also a quintet of $13,500 'non-winners of four races' contests as underfeatures, the fastest on the pace being won by – naturally – a Butenschoen trainee. Gray Dragon, a gray son of Dragon Again, was powerful in his Pocono debut, with Mark MacDonald guiding him to a 1:51.2 front-end success for Emerald Highlands Farm.

Quickest of the co-featured trotters was the Deweycheatumnhowe sophomore gelding Dewey Arnold, three-for-three since coming to Pocono and here winning in 1:53.2 – a season’s record, and only a fifth behind the filly Bella Bellini for the title of season’s fastest three-year-old on any size of track. Jason Bartlett sent the powerful diamond-gaiter down the road for trainer David Dewhurst, co-owner with Philip Hale.

On Saturday, the national-caliber stakes season for PA-sired horses has its 2021 local start with four divisions of a $120,000 Pennsylvania All-Stars stake for the glamour division, the three-year-old pacing colts and geldings. Much of the attention will focus on the 12th race’s One Eight Hundred, so impressive in two Weiss Series victories but then locked in and shuffled out of contention in the Weiss Final. Tim Tetrick has been tapped by trainer Nancy Takter as the pair starts from post seven in a field of eight on Saturday. Post time for Saturday’s card is 12:30 p.m., with the stakes races slotted in races nine through twelve and surrounded by an outstanding undercard. Program pages will be available on the PHHA website.