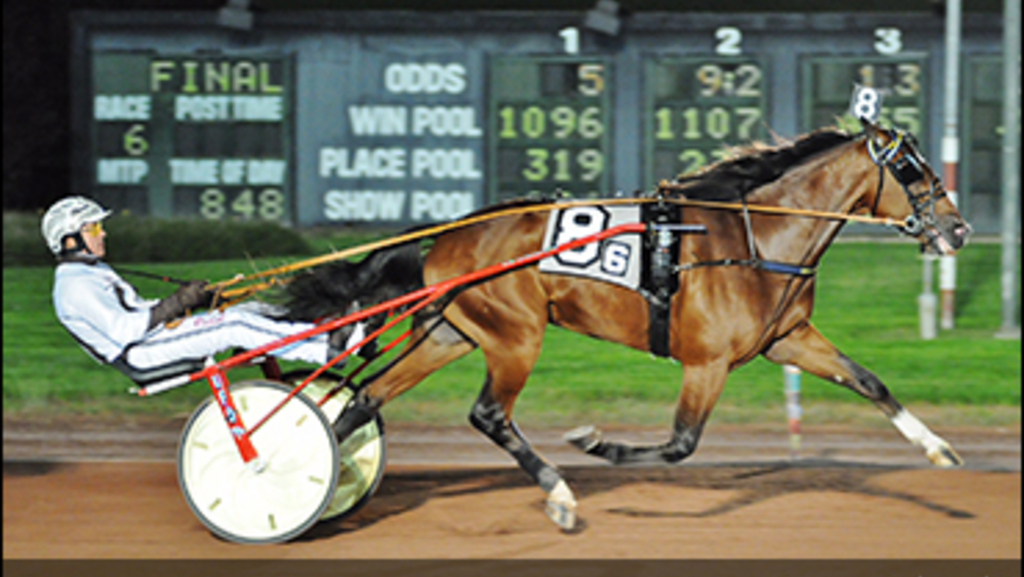 Courant Inc. and the SRF Stable's Gimpanzee ($2.10) extended his unblemished career tally to 10 wins in as many starts with a facile 1:54 win in his seasonal debut, the $215,200 Empire Breeders Classic for three-year-old New York-sired trotting colts and geldings on Monday (May 27) at Vernon Downs.

The overwhelming favourite was out-sprinted through the initial furlong by Cavill Hanover (Jim Morrill Jr.), and was then relegated to third after Mr Vicktor (Tyler Buter) cleared to control the terms at the conclusion of a :28 first quarter. Mr Vicktor was able to rate a :57.3 half before Brian Sears angled Gimpanzee first-over upon exiting the backstretch.

The Chapter Seven colt accelerated at once and pressed into Mr Vicktor with five-sixteenths to go, forcing a :27.3 third sectional before sticking his nose in front an eighth from home. Gimpanzee widened his lead under absolutely no urging from Sears, drawing away by 3-1/4 lengths at the winning post while well in hand. Mr Vicktor held second, and Travel Winner (Trevor Henry) emerged late for third.

Marcus Melander trains the undefeated Gimpanzee, who capped his two-year-old campaign with victory in the $600,000 Breeders Crown at The Downs at Mohegan Sun Pocono.

In the $209,500 Classic for sophomore trotting fillies, Quincy Blue Chip ($3.40) stalked live cover through the far turn before vaulting clear in mid-stretch for a 1:55 victory, the seventh of her career.

Jim Morrill Jr. was content to settle the daughter of Chapter Seven in midfield early while Sweet Chapter (Matt Kakaley) and Winndevie (Trond Smedshammer) duelled through a :27.3 first quarter. Winndevie worked clear with five-eighths to go and slowed the tempo to a :56.3 half as With Out A Doubt (Buter) advanced from fourth to head the outer tier.

Sensibility (Scott Zeron) rallied down the grandstand side to narrowly claim second at 23-1 over Sweet Chapter, who shook free from traffic to save third.

Nice colt but not so nice

Nice colt but not so nice name.