Sportswriter In To Go 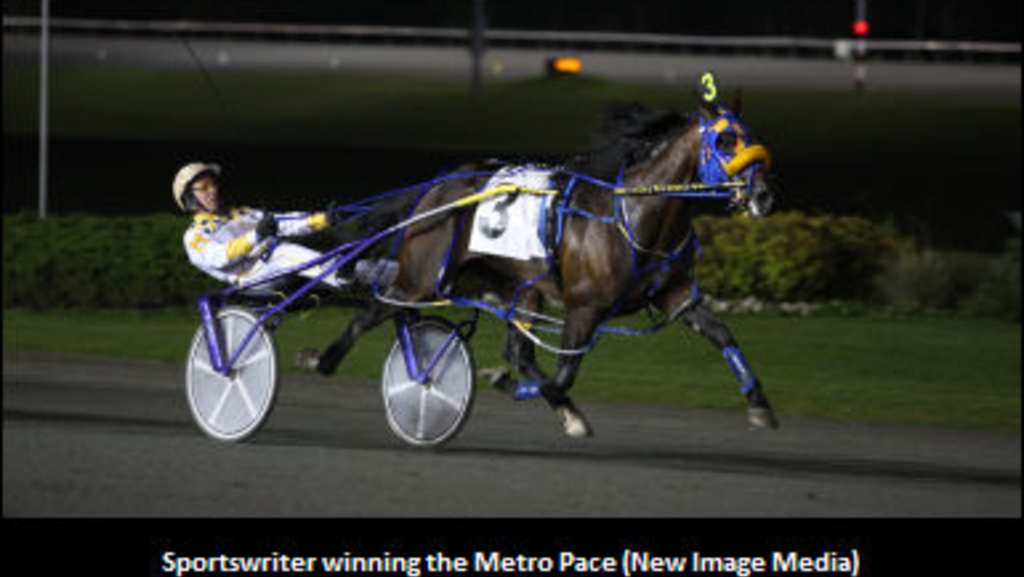 Off a solid qualifying effort last week, 2009 O'Brien Award and Metro Pace winner Sportswriter has been entered to make his first pari-mutuel start of the season

Sportswriter, who earlier this year was installed as the 3-1 favourite in Trot Magazine's 2010 Pepsi North America Cup Spring Book, has drawn Post 5 in Mohawk's fifth race, a conditioned event which will also feature a pair of other NA Cup eligibles.

Art Major colt Kyle Major (40-1 in Spring Book), who was a close third-place finisher in the $220,000 final of the Berry's Creek, has drawn Post 8 for trainer Shawn Robinson, who has listed Steve Condren to drive.

The Kris Di Cenzo-trained Willies Place (65-1 in Spring Book) has drawn Post 10. Mark MacDonald has been listed to drive the Artsplace colt. Willies Place captured the final of the Youthful Pacing Series earlier this spring.

Another who will be contesting the 10-horse event is former O'Brien Award winner Nebupanezzar. The Bob McIntosh-trained No Pan Intended gelding will be making his second pari-mutuel start after a hiatus. The four-year-old has drawn Post 7 and McIntosh has listed Condren to drive.

Race 5 on Mohawk's Saturday card has an estimated post time of 8:54 p.m.

Its only May, what is the

Its only May, what is the hurry. Sears ultimately takes the horse that gives him the best chance of winning. If Sportswriter doesn't pan out (which I think he will) then Sears books off and takes one of Teagues star pupils. Mark will have lots of chances he knows that. It is just one horse. As long as Pierce doesn't drive I will enjoy watching Sportswriter all summer.

Mark should be replaced by

Mark should be replaced by Sears, after all last year Sportswriter only won 7 out of 8 races including the Nassagawey stakes, the Champlain stakes, the metro pace and elimination and in the horses only loss was beat a nose in the breeders crown. The horse only made a little over $875.000, took a mark of 1:49.2 and was named 2 yr old pacing colt of the year. Why should all these accomplishments be enough to get him the drive this year.
He could have done so much more:)

If I were Mark MacDonald,

If I were Mark MacDonald, I'd tell her to get Brian Sears to drive her horse. Apparently he so much better they decided to replace Mark. Mark MacDonald is a good driver, he doesn't have to take Brian Sears leftovers.

What happened to the Hoosier

What happened to the Hoosier Cup? Not ready to go two heats after such great 110% qualifier?