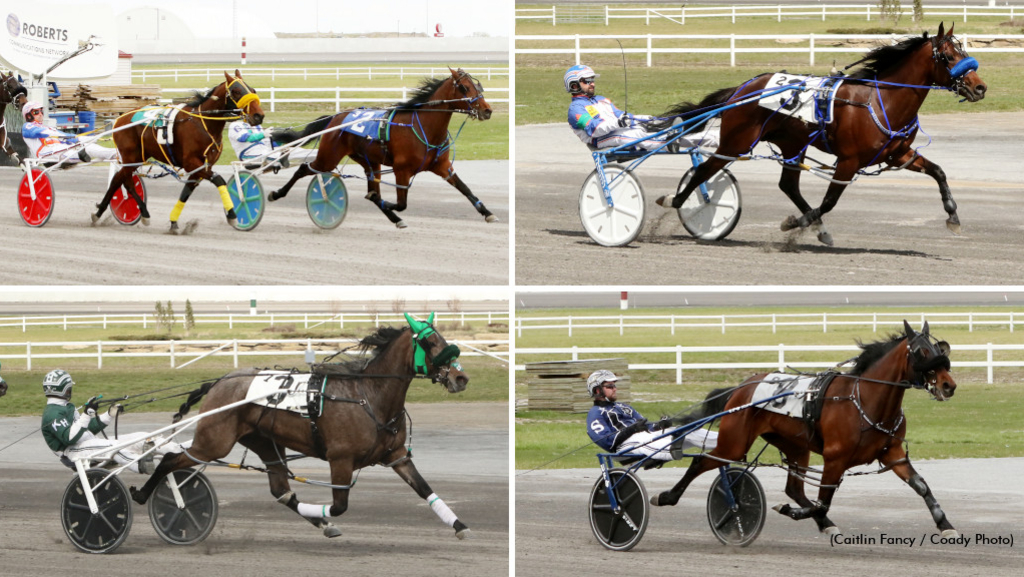 Vegas Gambler broke through for his first win of the season in his $7,500 Moore’s Mile Breeders Stake elimination for the tandem of driver Michael Hennessy and trainer/co-owner Rod Starkewski.

Starkewski, who shares ownership with partner Clauzette Byckal, watched the son of Mystery Chase-Nevada pick up his first win of the season from five attempts. The lion’s share of the purse bumped his career earnings over $75,000.

Ernesto Delacruz went to the front and didn’t look back in the second elimination for trainer/driver J.F. Gagne.

The son of Vertical Horizon-Camifasolasi Do got away with sensible panels of :30, 1:00.1 and 1:29.1 before zipping home in :28.1 to win by a half-length margin over Subzero in 1:57.2. Sharkas Lil Lad rounded out the Trifecta ticket.

Sent off as the 4-5 favourite, the colt improved his seasonal record to 3-1-0 from seven starts for Gagne and partner Peter Van Seggelen. The homebred pushed his lifetime earnings over $10,000 with the win.

Chaste Forever came up short in her career debut, but ever since that loss she hasn’t tasted defeat. She was victorious in her Shirley McLellan Breeders Stake eliminations, and in doing so she extended her winning streak to five-in-a-row for trainer/driver Kelly Hoerdt.

He got away third with the daughter of Mystery Chase-Panagler while Ventimatchalatte rolled along on the lead through fractions of :29.3, :58.4 and 1:27. Chaste Forever came first over on the way to the three-quarter pole and then used a :28.3 closing quarter to win by 2-1/4 lengths over stable mate Ventimatchalatte in 1:56. Daisy Corvette rounded out the top three finishers.

Hoerdt co-owns the roan filly with Carole Dunbar of Richardson, SK. The victory pushed her lifetime earnings to $15,500.

Divine Art was the quickest of the elimination winners thanks to her 1:54.3 triumph in the second split for the girls.

Trainer/driver Nathan Sobey tucker into an early four-hole with the daughter of Outrageous Art-Keystone Divine while Proud Of My Roots rolled the field through first-half fractions of :27.3 and :57. Sobey came first-over on the way to the half, and she brushed to the top shortly past the mid-way point. She then stepped the field to the three-quarter pole in 1:25.3 before using a :29-second closing panel to win by 6-1/2 lengths over Wrangler Jewel. Jamaica Move was third.

Sent off as the 9-5 favourite, the four-time winner pushed her lifetime earnings to $64,742 for owners Robert Jones, Diane Bertrand and John Hind.